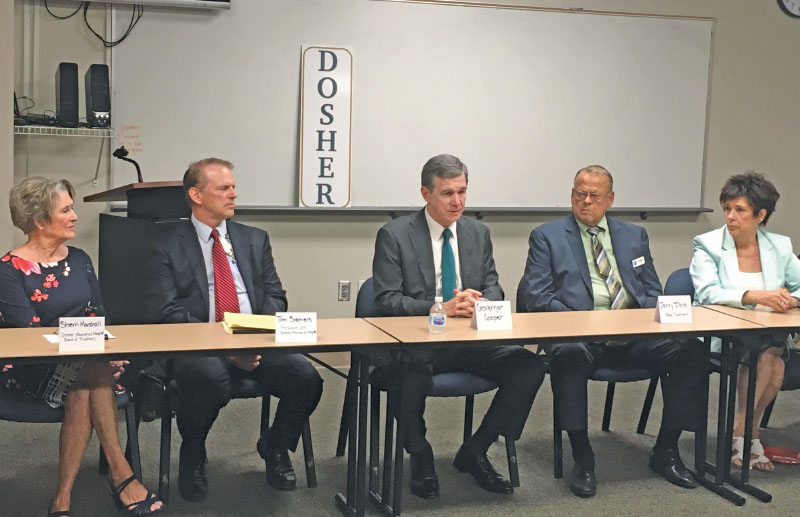 Gov. Roy Cooper (middle) visited Dosher Memorial Hospital on July 15 to discuss health care issues as well as his push to expand Medicaid in North Carolina. (Photo by Cheryl L. Serra)
Whether to expand the Medicaid program in North Carolina continues to be the main sticking point in approving the state budget in Raleigh, a stalemate that has extended for more than a month.

Gov. Roy Cooper, who has pushed the issue and vetoed the legislature’s spending bill largely because it did not include the expansion, has made the rounds to gather support on the issue.

That included a stop last month to Dosher Memorial Hospital in Southport, meeting with hospital leaders, elected officials and others.

During the visit, Cooper, a Democrat, described the proposal to lower Medicaid income eligibility requirements as a common-sense step that would expand access to affordable health coverage for thousands of families, bring millions of dollars to the state’s economy, create thousands of jobs and help rural hospitals remain open.

“Thirty-seven states [including Washington, D.C.], with bipartisan leaders, have already expanded Medicaid and are now receiving funding that could be coming to North Carolina,” a post on the governor’s website states.

This spring, Dosher president and CEO Tom Siemers joined leaders of several other rural hospitals in the state for a roundtable discussion with Cooper on the issue. The hospital’s trustees have adopted a resolution supporting the expansion.

Opponents have pointed to concerns over the future funding stream for the expanded care if the federal government later changes its plan to cover 90% of costs for participating states.

While the state budget is still being deliberated, last year’s budget is rolling over.

As of press time, Republican lawmakers had not been able to pull together enough votes to override Cooper’s budget veto.

Rep. Frank Iler, R-Brunswick, and Rep. Ted Davis, R-New Hanover, have expressed frustrations over the governor’s veto, saying important funding for local projects and resources were being held up.

“We don’t know where we are now that he has vetoed,” Iler said. “The one major reason seems to be Medicaid expansion. The expansion would add at least $1.8 billion to the state budget. Taxes would go up; that’s what it’s going to take to pay for it. We would be taking from one and giving it to another. The citizens lose, except for the ones getting free health care. It’s unfortunate he is holding it up for that.”

Supporters of the expansion argue that the move would improve health care access.

“Expanding Medicaid coverage would extend insurance to approximately 500,000 people across North Carolina, including many residents of Brunswick County,” Dosher Memorial Hospital trustees wrote in a resolution supporting the move.

Other health industry issues besides Medicaid came up during Cooper’s visit.

Dosher administrators and staff also pointed out that it is increasingly difficult to recruit medical professionals to work at the hospital, which is smaller and often offers lower salaries than their larger counterparts in more suburban and urban settings.

Tom Siemers, Dosher president and CEO, explained that the hospital is one of 20 critical access hospitals, or those with 25 acute care inpatient beds or less along with other factors, in the state. Dosher is the only independent one, governed by a board of trustees that is elected by the public.

Cooper noted that 40 percent of rural hospitals in North Carolina are operating in the red.

Siemers said that a high percentage of the hospital’s patients are selfpay, and sometimes they don’t pay, a cost the hospital has to absorb. By expanding the number of people for whom care can be compensated, the hospital would benefit, he added. He acknowledges that state leaders have many fiscal balls to juggle as they try to find the resources to support many needed programs and services in the state.

Some of the issues the hospital faces, according to staff members who responded to Cooper’s request for input, include a mountain of bureaucracy that has made providing services more difficult and time-consuming.

Brad Hilaman, Dosher’s chief medical officer, said he was concerned that states would one day wake up and say, “What happened to our rural health care? It’s gone.”