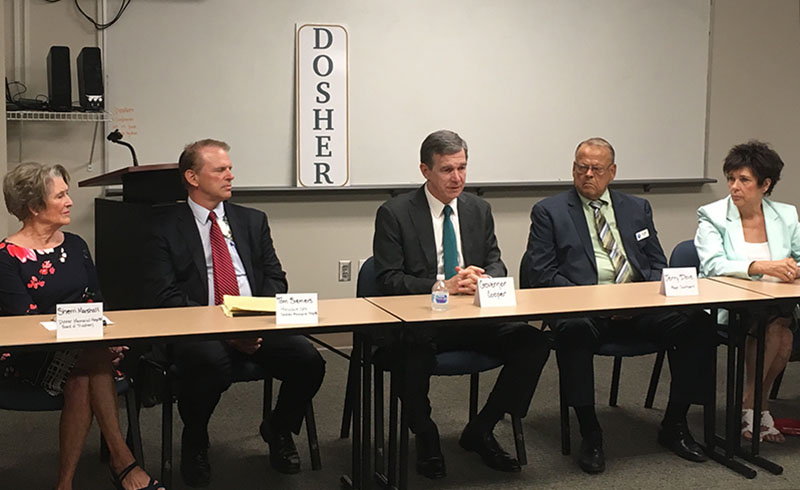 Cooper discussed his proposal to expand Medicaid, an issue that has become a factor in the budget standoff with state lawmakers.

During his stop Monday, Cooper called the extension a common-sense step that would expand access to affordable health coverage for thousands of families, bring millions of dollars to the state’s economy, create thousands of jobs and help rural hospitals remain open.

“Thirty-seven states [including Washington, D.C.], with bipartisan leaders, have already expanded Medicaid and are now receiving funding that could be coming to North Carolina,” a post on the governor’s website states.

This spring, Dosher president and CEO Tom Siemers joined leaders of several other rural hospitals in the state for a roundtable discussion with Cooper on the issue. The hospital’s trustees have adopted a resolution supporting the expansion.

Opponents have pointed to concerns over the future funding stream for the expanded care.

Dosher administrators and staff on Monday also pointed out that it is increasingly difficult to recruit medical professionals to work at the hospital, which is smaller and often offers lower salaries than their larger counterparts in more suburban and urban settings.

Tom Siemers, Dosher president and CEO, explained that the hospital is one of 20 critical access hospitals, or those with 25 acute care inpatient beds or less along with other factors, in the state. Dosher is the only independent one, governed by a board of trustees that is elected by the public.

Cooper noted that 40 percent of rural hospitals in North Carolina are operating in the red.

Siemers said that a high percentage of the hospital’s patients are self-pay, and sometimes they don’t pay, a cost the hospital has to absorb. By expanding the number of people for whom care can be compensated, the hospital would benefit, he added. He acknowledges that state leaders have many fiscal balls to juggle as they try to find the resources to support many needed programs and services in the state.

Some of the issues the hospital faces, according to staff members who responded to Cooper’s request for input, include a mountain of bureaucracy that has made providing services more difficult and time-consuming.

Brad Hilaman, Dosher’s chief medical officer, said he was concerned that states would one day wake up and say, “What happened to our rural health care? It’s gone.”

He encouraged the governor to make sure legislators were aware of and monitoring the financial health of rural hospitals.

Cooper said he’s also looking at other programs, such as a loan repayment assistance program for medical and behavioral health professionals who could provide evidence-based substance use disorder treatment in rural communities.

The governor said student loans “can be very oppressive” to doctors and other medical professionals. Many of the people who come to the Dosher emergency room are being treated for overdoses; about half of them have no medical coverage. Seimers said 50% of the hospital’s self-payer debt comes through emergency room patients.

Dosher trustee Robert Howard said the economic security of the community directly related to the hospital’s success, adding that the hospital’s financial sustainability was not just a medical or health care issue, it was economic development issue as well.

The hospital employs 300 clinical and nonclinical staff members, according to Dosher’s website.

Carol Northup, Dosher’s vice president of patient care, echoed Hilaman’s remarks about the challenges of recruiting employees. She added it’s also important to have academic institutions and programs in the area to train these professionals so the hospital can replace those who are aging out and retiring.

Cooper said he has proposed using the interest on the employer-funded unemployment fund to help fund education for those in high demand fields like health care.

He said that he and legislators must come together to resolve some of these issues, such as ensuring medical providers are compensated for the services they provide and helping rural health care providers stay afloat.