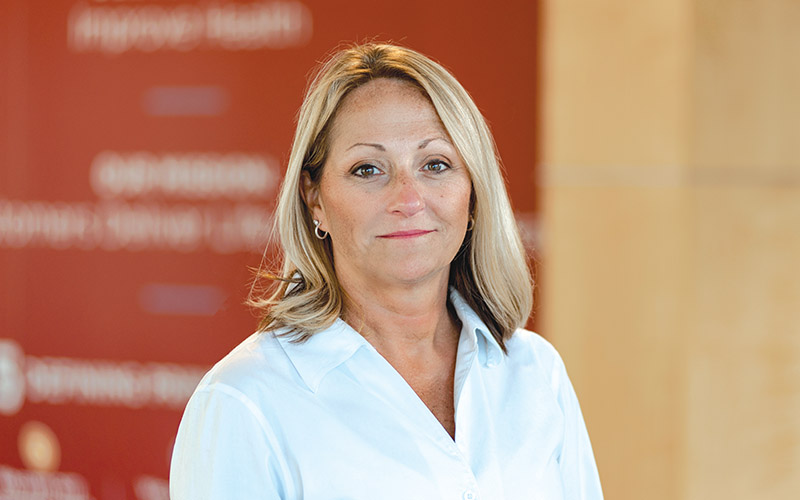 Rhonda Henry, vice president of patient-centered trials at PPD, was recognized recently as an inspiring voice in the pharmaceutical industry. (Photo by Michael Cline Spencer)
Rhonda Henry knows what it’s like to have a potentially terminal illness.

“The diagnosis was somewhat of a fluke. I had a biopsy because I had some inflammation in a mammary duct, and it turned out to be invasive cancer,” Henry said.

Henry, who had two young chil­dren at the time, and her doctor pur­sued an aggressive treatment plan, with a bilateral mastectomy and four rounds of chemo.

These days, Henry’s in charge of developing and implementing solu­tions to help PPD’s customers reach more patients with clinical trials as possible care or treatment options.

“I think in some ways, it was a blessing because even though I was in clinical research and I had been a nurse, breast cancer gave me a pa­tient perspective,” Henry said, “what it’s like to be on the other side of a condition.”

Henry recently received a major pharmaceutical industry accolade. She and Karen Kaucic, chief medi­cal officer of PPD and president of Evidera, were named to the 2020 PharmaVOICE 100 list of the most inspiring people in their industry.

Published by PharmaVOICE magazine, the PharmaVOICE 100 is an annual list of “inspirational and innovative individuals recognized for their positive contributions to the life sciences industry,” according to a PPD news release.

Profiles of Kaucic and Henry ap­pear in the PharmaVOICE 100 issue.

“They’re impressive individuals so to be considered part of that group is quite an honor,” Henry said. “There are a lot of people across the industry who’ve been doing this a lot longer than I have that deserve this recognition even more than I do but I find it very motivating. It’s made me want to continue to do what I’ve set out to do, the mission that I’m on, and to do it to the best of my ability.”

Henry described that mission as “giving people greater access to op­tions in their own health care.”
“So, for me, most of the time that includes clinical trials,” she added. “But it’s providing patients, individu­als caregivers, with access to clinical trials, as a treatment or a care option and then making it easier for them to participate in a clinical trial should they choose to do so.

“And by doing that, I’m helping the industry solve one of the biggest challenges, which is finding individ­uals that are willing to participate in trials so that we can get the data that we need to see if a drug is safe and effective.”

“As a breast cancer survivor, Rhonda is deeply passionate about creating greater access to clinical tri­als and removing potential barriers to participation,” said Nik Mor­ton, senior vice president of digital services at PPD, in a news release about the PharmaVOICE list. “This passion overflows to her colleagues. When it comes to improving patient access to, and experience within, clinical trials, Rhonda makes it her business to understand every single asset or capability that exists across PPD and the broader industry of partners and vendors that PPD could or should collaborate with – if that collaboration can improve the trial conduct and patient experience.”

Henry explained how PPD goes about finding patients, which in­volves a multi-faceted approach.

“By and large, we have used investigators, which are health care professionals who have been trained to do clinical research,” she said. “We have an entire database full of sites, all over the world, that have experience in clinical research and have access to patients with certain indications. They may be specialties or subspecialties, but that’s just one methodology.”

“Now, what we’re seeing, especial­ly with COVID and the pandemic, is that we’re doing much, much more direct-to-patient outreach, so reach­ing patients through advertising, ar­ticles, social media and through peer groups and Facebook communities.”

Her journey to working for PPD for nearly 29 years began with her desire to become a nurse.

“I wanted to serve,” Henry said. “I wanted to help people and nursing was the field that I chose.”
Henry pursued that career in Wilmington.

“I graduated from UNCW School of Nursing and worked for several years at New Hanover Regional Medical Center and was presented this opportunity to go to go work for this new company in town called PPD as a clinical research associate which is an entry-level position,” Henry said. “And all I knew was that they were hiring nurses to travel around to doctors’ offices to be anywhere in the world to educate them about a clinical trial and to collect data. And I thought, ‘How cool does that sound?’”

Besides the opportunity to travel, there were other benefits Henry liked about the job. “I don’t have to wear a nursing uniform; I can wear regular clothes; I can work 8 to 5, nonshift work,” she said of her thoughts at the time. It turned out “to be a career that I absolutely loved.”

Henry continued to advance within PPD.

“I was given the opportunity not only to lead a therapeutic area there but then to move over into the business side of things and develop strategic relationships with pharmaceutical and biotech companies that helped us work more collaboratively and more effectively together,” Henry said. “And now I’m back in the operations side, again working in an area that I love and that’s patient-centricity, helping the industry become more focused on patients as the key stakeholder in drug development.”