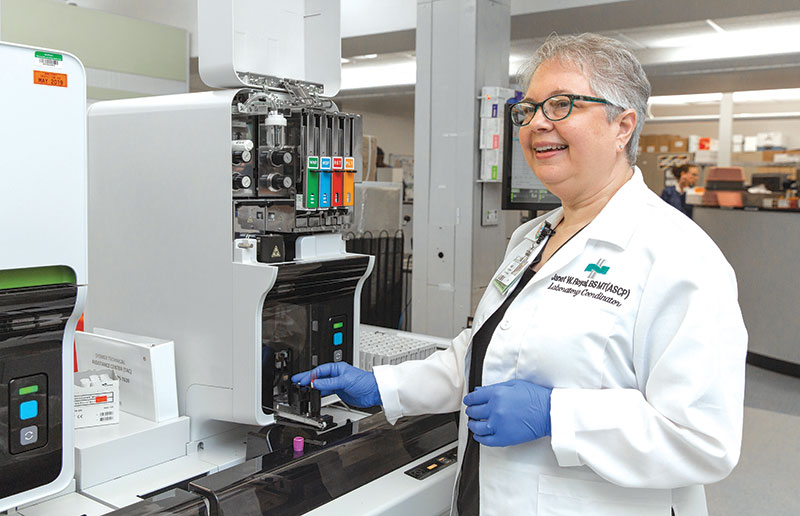 “That’s one that’s forecasted to grow nationally, and you would expect that it would grow here even faster just because of the demographics of this area,” said Adam Jones, regional economist at the University of North Carolina Wilmington, referring to the number of retirees that make the Wilmington area their home.

The health care sector in particular is seeing the need for more workers, experts say.

This spring alone, New Hanover Regional Medical Center made the goal of hiring 200 new nurse graduates, a necessary ramp-up (from the 60 to 80 entry-level nurses the hospital usually needs each year) in part because NHRMC is adding an orthopedic hospital on top of the surgical pavilion at its main campus on 17th Street in Wilmington. NHRMC has a total workforce of about 7,000 employees.

“Right now as we look at the growing volumes that we’ve had, the increased demand that we’ve had, you can see the cranes and facilities growing; we need to have the staff to support that,” said John Gizdic, NHRMC president and CEO.

In May, NHRMC ranked No. 47 on the Forbes magazine list of America’s Best Employers of 2018, and Wilmington- based contract research organization PPD ranked No. 354. The list is based on surveys from 30,000 employees at the U.S. operations of companies across the nation.

Gizdic attributes the hospital system’s ranking to a number of factors, including creating a culture that values employees, patients and the community.

And such rankings can have an impact even beyond the hospital, Gizdic said.

“It’s certainly something to be proud of and brag about and to let people know it’s not just us saying it’s a great place to work … I think between that [the national rank] and some of the other positive press that our region’s had recently, hopefully we’ll not only see growth in employment for New Hanover but for the whole region,” said Gizdic, who is also this year’s chairman of the Wilmington Chamber of Commerce’s board of directors.

While economists and some community leaders say the Wilmington area needs to grow its traded sector (those businesses that sell goods or services outside the area), health care employment in general will likely grow without recruitment efforts.

“You would expect with an aging demographic that demand for services for the older cohort will increase as well so it’s not just hospitals and nurse employment, but also you’re talking about the physical therapists and dermatologists and the support staff at dermatology offices and all those other areas that focus on the older demographic,” Jones said.

The medical provider segment of the region’s economy tends to grow organically “when the conditions are right and the leadership is there,” said Scott Satterfield, CEO of Wilmington Business Development, the main economic development agency for New Hanover and Pender counties. “Greater Wilmington is blessed with both.

“NHRMC certainly recruits physicians and providers, and that process involves the same points used in marketing Wilmington for a corporate relocation or new air service, for example. Livability and the fact that we’re a growing region where people want to be – that creates a lot of momentum.”

As a marketing asset, Satterfield said, NHRMC and quality health care providers in general are essential.

“We put it at the top of the list of lifestyle amenities. It’s right there with strong schools and a diverse housing stock. Excellent primary and specialty medical care, and the allied health services that go along with them, are a must-have for companies here, as well as the ones we’re trying to bring and grow here,” Satterfield said.

NHRMC is Southeastern North Carolina’s largest employer, and not all of its employees live in New Hanover County.

Janet Royal drives nearly 50 miles from the Columbus County city of Whiteville to work her shifts as a laboratory coordinator for NHRMC in Wilmington.

After 30 years working at Columbus Regional Healthcare System, her last years as director of the lab, Royal decided it was time for a change and took a pay cut to work in a support role at New Hanover for a number of reasons. Those reasons included the chance to work with Kevin Briggs, administrative director of pathology and laboratory services at NHRMC, with whom Royal had worked before at Columbus.

“He inspires me,” Royal said.

She said she liked the health benefits NHRMC offers, including an employee fitness center that is open 24/7, seven days a week. NHRMC is self-insured, Gizdic said, and its benefits costs have only gone up twice in the past 12 years.

Royal said she is also likes NHRMC’s workplace culture. “There’s just a lot to draw me here,” she said.

Local providers also have to cope with shortages in some professions at times, including the nursing and laboratory tech fields.

“Experienced nurses are a little harder to recruit,” explained Gizdic. “Most of the time they have to move from somewhere.”

Recruiting trips to other cities, including Pittsburgh and Nashville, Tennessee, have produced results, he said. It’s also important, he said, for providers like NHRMC to work with local schools, including the University of North Carolina Wilmington and Cape Fear Community College, and local students.

UNCW broke ground in January on its $66 million Veterans Hall, a facility that will help the university meet the needs of a growing enrollment in its allied health programs. “Allied health” generally describes professions in the industry outside of doctors, nurses and dentists. In another example, Brunswick Community College is spending nearly $6 million for an allied health facility expansion project.

Strong growth in all job sectors is important, Satterfield said, and WBD aligns its local targets with state and regional partner recruiters.

“We view advanced manufacturing, logistics and distribution, regional and divisional headquarters, life sciences, consumer food and beverages, and software development as areas of focus,” he said. “Again, diversification is very important. Every employer and every job matters.”