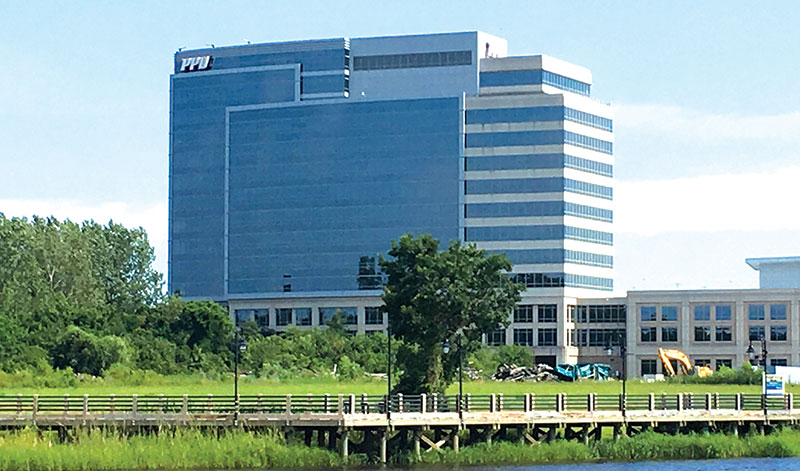 PPD’s headquarters are shown in a view from the Cape Fear River. The firm has been based in Wilmington since the mid-’80s. (File photo)

After more than a year of speculation that Pharmaceutical Product Development LLC (PPD) might seek out a buyer – heightening concerns locally that its Wilmington headquarters could move – the company announced plans in April to recapitalize and bring on two new investors.

During the second quarter of the year the transaction, which was based on a total enterprise value of $9.05 billion, closed in a deal with a subsidiary of the Abu Dhabi Investment Authority (ADIA) and an affiliate of GIC, Singapore’s sovereign wealth fund. The two companies were made direct investors in PPD, while private equity firms The Carlyle Group and Hellman & Friedman maintained joint ownership.

Under the agreement, Hellman & Friedman assumed majority ownership of PPD, and Carlyle retained a substantial minority position in PPD.

Affiliates of Hellman & Friedman and Carlyle bought PPD in 2011 for about $3.6 billion and returned it to a privately held company. ADIA and the GIC affiliate investing in PPD are both longtime investors in Carlyle and Hellman & Friedman.

“In connection with the transaction, PPD expects to raise approximately $550 million through the issuance of new senior unsecured holdco notes,” officials said at the time of the announcement. “The proceeds from the investments of Hellman & Friedman, Carlyle, ADIA and GIC and the issuance of the new notes will be used to finance the recapitalization.”

PPD’s board found that a deal led by its existing owners was the best route after looking at all the options, officials said.

“PPD is stronger and healthier than it’s ever been since going private in late 2011 and has progressed its strategy to reduce the time and cost of drug development for our customers,” David Simmons, chairman and CEO of PPD, said in his statement about the deal.

The move lessened local concerns that a potential buyer might move PPD’s headquarters from Wilmington. PPD has more than 19,000 employees worldwide with 1,500 employees in Wilmington.

When asked about the impact of the deal in Wilmington, Elizabeth Kuronen, vice president of corporate communications for PPD, said in an email at the time, “Our employees and operational teams will continue to focus on delivering for our clients and maintaining our business momentum, as they have successfully done. We will continue to progress our strategy, and we remain dedicated to our purpose and mission of improving health by helping our customers deliver life-changing therapies.

“PPD has been headquartered in Wilmington since 1986, and the community continues to offer an outstanding location for our operations. We look forward to building on that relationship in the years to come."