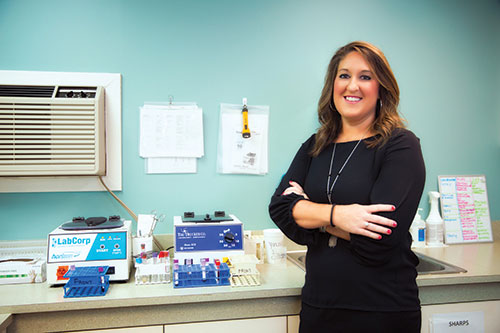 Brittany Hayes, site director of operations for PMG Research’s facility in Wilmington, is part of a growing pool of companies tied into clinical research or support. (Photo by Chris Brehmer)
When people think of Wilmington’s CRO industry, the company that may be top of mind is PPD, with its multi-story building dominating Wilmington’s riverfront skyline.

But the area’s pharmaceutical and medical research-related community is both larger and more complex than most people realize, with entities of all sizes providing an array of specialized services that support other companies in the network.

One of them is PMG Research, whose Wilmington office is on Medical Center Drive.

PMG collects the data generated from those clients, analyzes it and reports findings to the study sponsor.

“PMG is an integrated site network. Our corporate headquarters are in Winston-Salem, but we have research sites elsewhere,” Hayes said. “The Wilmington site is the largest in the network; it’s kind of like a front leader for PMG. We tend to pilot things here.”

PMG is an example of more than 100 companies that make up the clinical research and biotechnology industry cluster in the area, according to the most recent report on the Clinical Research Industry in southeastern North Carolina, published by the N.C. Biotechnology Center. The report states that this cluster employs more than 3,200 people locally.

PPD is by far the largest company in the area’s cluster, with about 1,500 employees locally and about 19,000 in nearly 90 facilities all over the world. In the past five years, the company’s workforce has grown about 70 percent, according to officials.

PPD describes itself as a contract research organization that “provides comprehensive, integrated drug development, laboratory and lifecycle management services” for clients and partners in the pharmaceutical, biotechnology, medical device industries and in academic and government organizations. Those services include running clinical trials.

“Our strategic investments to expand our comprehensive service capabilities have been very well received by our clients, and we are well-positioned for continued global growth,” said Elizabeth Kuronen, PPD’s vice president of corporate communications.

A couple of those investments have been in the news this year. PPD opened a new clinical research unit in Las Vegas in January and expanded its vaccine development laboratory in Richmond, Virginia, in May.

Also in May, PPD announced the creation of a dedicated unit that combines its medical affairs research operations team and Evidera, a company that tests the effectiveness and safety of biopharmaceutical and biotechnology products. PPD acquired Evidera in 2016.

This spring, the Wilmington-based company announced it was adding two new investors in a deal that valued PPD at more than $9 billion.

Clearly, PPD’s longtime presence in Wilmington and its 2007 $110 million investment in a new headquarters downtown has generated growth in related businesses, but others in the CRO cluster cite additional reasons for the area’s attraction.

“We are two hours away from the Research Triangle Park, and obviously there’s a pretty good hub of medical, biotechnology and pharmaceutical companies in RTP. We’re proximate to that,” said Nick Dyer, president of Novella Clinical in Wilmington. “I guess you would look at PPD as being the anchor. That business created a number of very experienced folks. There’s also a strong academic element here in Wilmington.”

The presence of University of North Carolina Wilmington is important, Dyer said, because it is a source of new entrants into the CRO industry. “It’s the availability of people that really made Wilmington attractive,” he added.

Novella Clinical, with operations in North Carolina, Ohio, New Jersey and Europe, has had a presence in Wilmington since 2006. It was acquired by Quintiles in 2013 but continues to operate as a stand-alone clinical research organization that runs clinical trials focused on three areas: oncology, medical device and dermatology.

“We’ve grown nicely here in Wilmington and can point to a nice steady growth rate over the last 11 years – certainly ahead of the average growth rates for CROs,” Dyer said.

In the case of Quality Chemical Laboratories (QCL), Wilmington was the only location its founder, Yousry Sayed, considered. As a member of UNCW’s chemistry department faculty, Sayed was concerned that many graduates could not find work locally. So after he retired, he launched a company that tested pharmaceutical ingredients.

QCL’s capabilities have also expanded. It is now a chemical manufacturing and controls entity that produces and tests drugs and drug raw materials to ensure that they are pure and they perform as intended. The company is also taking a step into the contract research world as it begins producing drugs at specified doses for phase one clinical trials, Barron said.

“There’s no outside money here. Everything here is Dr. Sayed,” he said. “All our growth is organic. There are no outside people; we are a flat organization. Dr. Sayed is committed to the growth of scientific services in the Wilmington area.”

And the sector is growing.

“The emergence of the life sciences community in Wilmington has been impressive and merits all of our support in order to diversify and expand the local economy. Life sciences jobs are well-paying, and we can all see the value in the industry’s focus on improving health and saving lives,” said PPD’s Kuronen.

Randall Johnson agrees that the area’s CRO cluster is growing, both in terms of number of companies and number of people employed in the cluster. As director of the southeastern office of the N.C. Biotechnology Center, he is also part of an initiative to boost growth and capabilities even more.

The N.C. Biotechnology Center, along with UNCW’s College of Health and Human Services (CHHS), Department of Mathematics and Statistics and the Cameron School of Business, is implementing a clinical research and economic development initiative partly funded by a $390,000 grant from the Duke Energy Foundation. The initiative engages companies in the CRO cluster as well, officials say.

The grant, made to the CHHS in 2015, supports an effort with three primary goals: to enhance the curriculum of UNCW’s clinical research and statistics degree programs; to create a student fellowship program that will place students in those degree programs side by side with industry partners; and to provide continuing education for employees currently in the industry.

A dedicated workspace in and adjacent to the university’s Center for Innovation and Entrepreneurship will provide a place where educators, industry partners and students can collaborate, Johnson said.

“I would love to see the CIE spawn CRO/tech companies,” he said, adding that this initiative could also help existing companies in the CRO cluster to grow. “What we need is talent. We intend for our CRO community to have access to the best talent.”

UNCW has already been successful in preparing students for the industry, as evidenced by the number of graduates recruited by companies such as Novella Clinical and QCL.

PMG Research’s Hayes said she earned both her bachelor’s and master’s degrees in clinical research at UNCW, and her company gets clinical research program interns from the university each year. Many of those interns become employees, she said.

With some funds from the Duke Energy Foundation grant, CHHS will develop new and enhanced programs specific to biostatistics and clinical operations, according to a statement from CHHS Dean Charles Hardy.

“Since I went through it, [UNCW’s] program has changed a lot; it’s getting better every year,” Hayes said. “Their faculty is out in the community and seeing trends, and then going back and training students. It’s easier for us to hire right out of the program.”

Johnson said he hopes that the Duke Energy Foundation-funded initiative will help companies in all aspects of the local CRO community recruit talent. The jobs generated by firms large and small also tend to pay more than the average area salary.

Correction: This version corrects the value placed on PPD in its recent deal. That figure is $9 billion.