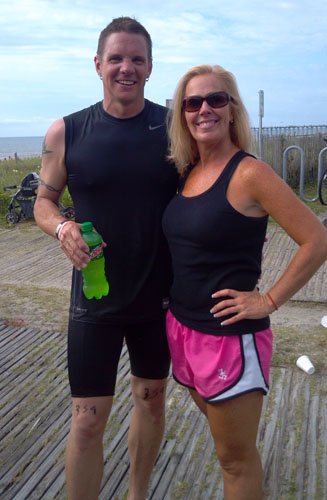 Mike Worley, left, will run from Carolina Beach to Raleigh this week, dedicating the run to his girlfriend and breast cancer survivor, LaVonda Howard. CONTRIBUTED PHOTO

Carolina Beach triathlete and distance runner Mike Worley will run with a team of other local athletes from Carolina Beach to Raleigh – about 148 miles – this week to participate in the Susan G. Komen Race for the Cure in the Research Triangle area on Saturday. Worley dedicated the run to his girlfriend, LaVonda Howard, who is a breast cancer survivor.

“I’ve been to her oncology appointments and seen what happens when cancer enters the home. I wanted to do something different and let people know Wilmington’s coming,” Worley said.

The Susan G. Komen organization expanded this year to include this region. The North Carolina Triangle to the Coast affiliate serves 29 counties including New Hanover, Brunswick and Pender counties.

Worley is the president of the Pleasure Island Chamber of Commerce board of directors. He’s currently training for his first Iron-distance triathlon, the PPD Beach2Battleship.

“This isn’t in my training manual, but it’s going to be fun,” he said.

Worley and the team will begin running on Thursday at 9 a.m. from the lake at Carolina Beach and will run overnight for a total of about 29 hours. Rex & Sons RV has donated a vehicle to support the team.

“We won’t be on I-40. We will be on backroads,” Worley said. The team launched a website and will stream video from the road.

They plan to stop for an hour at the midway point in Spivey’s Corner and again for two hours near Fuquay-Varina and Garner to allow commuter traffic to clear. They expect to arrive at Meredith College in Raleigh on Friday.

The race draws about 25,000 participants, organizers said. The group is planning its first 5K race in downtown Wilmington on March 2, 2013.