Freshening Up Of Garner Report Underway 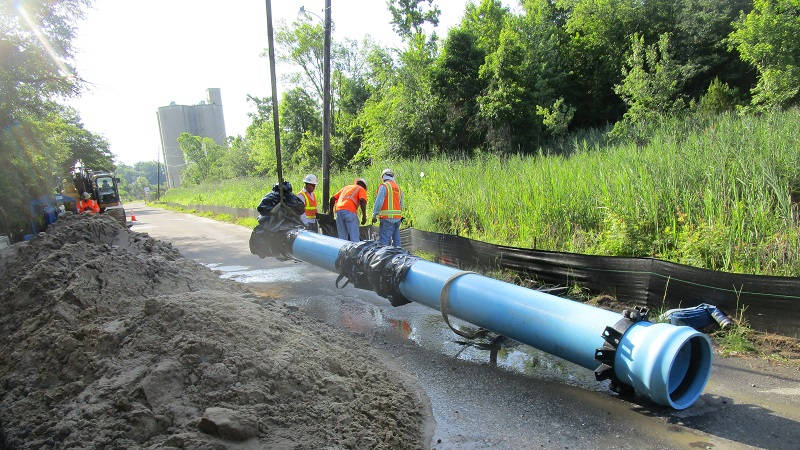 Crews work on site of the U.S. 421 water and sewer project, which completed construction in November 2019. The joint county-CFPUA initiative arose out of recommendations from the 2014 Garner Economics report. (Photo courtesy of CFPUA)

Nearly eight years have passed since New Hanover County last ordered a comprehensive analysis of its economic development landscape. A revisited, yet briefer version of the 2014 Garner Economics report has been quietly underway this year, with delivery set for February 2022.

Robin Spinks of Greenfield Development Company is leading the task alongside her business partner, Mary Lilley.

With an intimate knowledge of the local players in the economic development world, Spinks’ review will offer a unique perspective of the Cape Fear scene. She serves on the Wilmington Chamber of Commerce’s board of directors and has experience on each end of the economic development dance: as a business owner seeking properties, as a site selection consultant, and as a community recruiter selling industrial sites. Her firm regularly consults with businesses, agencies, and governments across the nation on similar projects, but has never been formally tasked to review her home field – until now.

“Behind the scenes, I’ve always put my 2-cents worth in,” Spinks said.

Her deep understanding of the local market is both a “blessing and a curse” for Spinks on this project. The upside is a streamlined data- gathering process, and the downside may be that she already has a perspective – one that her out-of-market business partner can help counter when it comes time to deliver official opinions.

The report will serve as a reference guide for local officials and stakeholders in its assessment of the economy’s current path and recommendations of the direction ahead. It will help local leaders prioritize public economic development expenses and efforts, and highlight the region’s strengths and weaknesses. As the world has evolved post-pandemic, the revisit will account for shifting economic trends.

“COVID has changed business practices and business processes radically,” said Jennifer Rigby, the county’s chief strategy officer. “There's so many more people working from home now. And so obviously, that's going to have a big impact on our economic development strategy.”

At the time the Garner report was first ordered, the economic development scene was in disarray, in the midst of public uproar surrounding the planned Titan Cement plant. County commissioners had approved a $4.2 million incentive package for the company in 2008 with little time for the public to substantively learn details about the project (a normal occurrence, given the competitive and confidential nature of these kinds of deals). After years of stalled permit approvals, the company scrapped its plans for the Castle Hayne plant in 2016, citing market factors, refuting the influence of local pressure over concerns about air pollution.

In the wake of the reset, officials seemed to reach a consensus that the region ought to target clean industries, given the area’s coastal habitats and public sentiment.

“The lay of the land was in turmoil about where the future ought to go,” Spinks said. “We sort of had a wreck before and needed to start over, whereas this time, we’re driving down the road and just looking in the rearview mirror and looking forward saying, ‘Are we going into the right direction?’”

Ahead of the Garner report rollout, which cost the county over $100,000, the city and county formed a joint steering committee, and the consultant organized public input sessions and gathered data via online surveys. This time, there won’t be any public input opportunities ahead of the formal presentation.

Greenfield’s work product – which will include a formal review of the Garner report, updates to its recommendations, target sectors, and a competitive analysis – won’t be quite as grand in scale, Spinks said. “It won't be a beautiful, huge document,” she said.

To date, Spinks has interviewed dozens of stakeholders – more than she initially planned to – and just a handful remain.

She’s interviewed politicians, key economic development leaders and “businesses of all different sizes and shapes and organizations” to get a pulse of where things stand.

“We're collecting a huge amount of data and reviewing that because the world is very different,” she said. “The data is showing how different things are today. And there have been so many accomplishments.”

“We're going to make recommendations related to what target sectors are appropriate in today's world versus that world,” Spinks said. “Some may change, some may not change.”

Commissioned by the county via a sole-source contract for $60,000 executed in July as part of the budget process, Rigby said the county was seeking someone with unique experience for this project. By dedicating staff hours to data-gathering efforts, the county is saving money on the report.

“We believe that analysis is as much art as science, and that the feel and character of a community are as important as the statistical data in creating a development plan and its implementation strategies,” Greenfield’s January proposal states. “We like to push our clients to dream and reach for lofty goals, but we are focused on the practical.”

In 2017, the county and city held a joint meeting, and discussed key recommendations of the report: the $18 million effort to run utilities down roughly 7 miles of U.S. 421 in New Hanover County would begin construction later that year; officials considered a more structured incentive policy to lure businesses; a marine science focused consortium of public and private interests pushed for more public investment.

Since then, there’s been limited public harkening back to the original report; in 2019, the county reviewed it as part of a post-Hurricane Florence recovery assessment, according to a county spokesperson, but not to the extent that is currently underway. Rigby said the time is ripe to get a renewed look at the Garner report’s initial recommendations.

“We really want to dust off the data and say, ‘Are those still the right sectors that we need to be looking at?’” she said. “I won't say it's a complete overhaul, because the Gartner report was a really good framework for our community. So this is really to update a lot of that data … and clarify and confirm our direction for the future.”

The goal is to take stock of where the community stands, what it’s accomplished, what the data says, and if any adjustments are warranted, Rigby said.