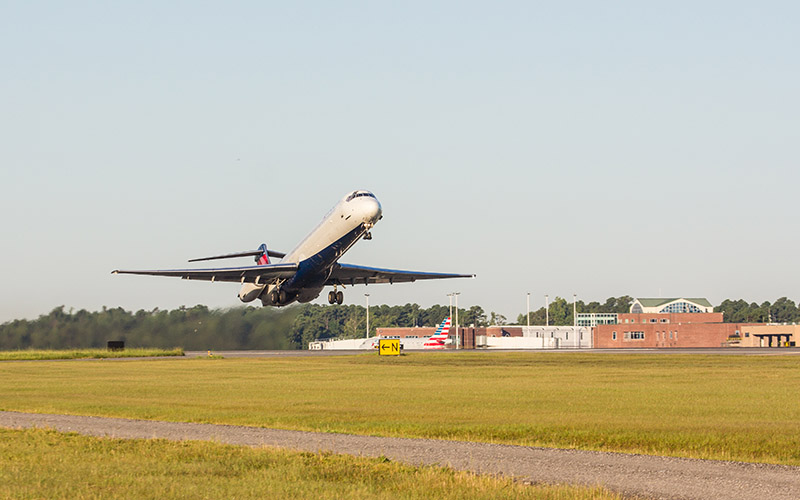 The Federal Aviation Administration first announced the airline allocations Dec. 16, with $2.8 billion heading to over 3,000 airports across the nation. Funds will derive from a new initiative created by the infrastructure law, the Airport Infrastructure Grant program. Cape Fear Regional Jetport in Oak Island netted $295,000, and the Odell Williamson Municipal airport in Ocean Isle Beach will receive $159,000.

With a $3,781,091 allocation, ILM was awarded the fifth-most funds in North Carolina, behind Charlotte, Raleigh, Greensboro and Asheville.

Airports can utilize the funds for investments in “runways, taxiways, safety and sustainability projects, as well as terminal, airport-transit connections and roadway projects,” according to the FAA.

The money could help ILM offset costs for multiple projects still in the planning phase, according to Granseur Dick, the airport’s facilities director. Local staff was aware the infrastructure bill included funds for airport improvements, but before the FAA’s announcement Thursday, didn’t know how much would be carved out for ILM, Dick said. “This is still early in the process so we are still learning ourselves,” Dick wrote in an email.

ILM is in the midst of a $68 million expansion, which will add on four new gates. At its meeting last month, the airport authority tacked on another $6.89 million to the three-phase project to expand and renovate the baggage claim lobby, expand the ramp-level bag receiving area, and replace claim devices with modernized equipment.

The multi-million-dollar move was the third most eye-catching decision the authority made that meeting, after signing off on leases that will lure an estimated $120 million in investment and naming a new airport director.

At its following meeting held earlier this month, the airport authority approved three supplemental agreements: one expands its contract with Monteith Construction Co. to plan for an added project, estimated at $3.2 million, for a new passenger boarding bridge at the current gate six, relocating a bridge and for bridge accessories; the others add $580,000 for construction administration services associated with the bridge and baggage add-ons.

“ILM is grateful for the support of Congress and the FAA for our continued efforts to improve and expand our aviation infrastructure, building facilities that are safer while more efficiently meeting the demands of our national air transportation system,” Dick wrote in an email.

Monday morning, The Points Guy reported that Delta was adding five flights to its lineup amid cutting 10 regional pathways. ILM was among the five resumed flights, all originating from LaGuardia Airport in New York.

"As we continue to constantly evaluate our route network based on customer demand, we’re excited to be able to offer this additional air service to the community of Wilmington," a Delta spokesperson wrote in an email.

Since June, passenger trends at ILM have been consistent with pre-COVID numbers.