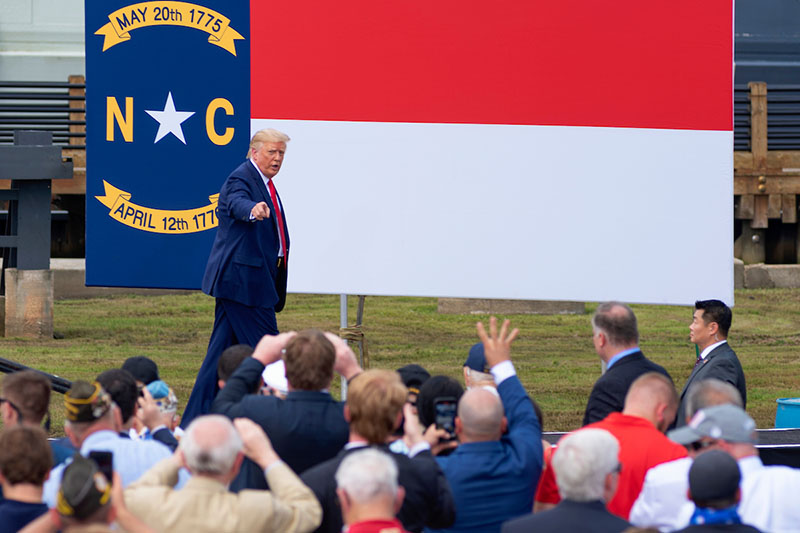 The president comes to North Carolina, a battleground state, during a heated presidential election year.

President Trump said during his visit Wednesday that it was his honor to officially designate Wilmington as the nation's first WWII Heritage City, which he said was a "big deal."

"There's no better place to mark this profound WWII anniversary than right here in Wilmington, North Carolina, [with] the people of this city and this state, and it's an incredible state," Trump said. "And I want to thank you for being so nice to me. You've been very nice, very, very nice."

"In Wilmington, more than 20,000 workers of the North Carolina shipbuilding company poured out every ounce of their strength to build an astonishing 243 ships for the U.S. Navy. And it was the citizens of Wilmington who came together to save this priceless artifact of American history, the glorious battleship behind me, the USS North Carolina, and that is some powerful and beautiful ship," he added.

Trump shared his remarks at the Battleship North Carolina on Wednesday afternoon. The president visited Wilmington to make the heritage city declaration and commemorate the 75th anniversary of the end of World War II, which took place Sept. 2, 1945.

“President Trump likes to call himself a wartime president, but the reality is that North Carolinians are still suffering because he surrendered to COVID-19 long ago,” Biden said in a release. “President Trump still does not understand that in order to fully and effectively restart the economy, we must defeat the virus.”

Meanwhile, Gates McGavick, a spokesperson with the North Carolina Trump Victory campaign said in an email that the president is looking out for the country’s economy.

"While Joe Biden is pushing another economic shutdown from the safety of his basement, President Trump is on the ground and making the case for the pro-growth, law-and-order agenda that will keep North Carolina red come November,” McGavick said.

Wednesday's battleship event was closed to the public. Addressing the invited attendees, including WWII war veterans, local officials and advocates, Trump recognized some of the veterans in attendance including Woody Williams, a retired United States Marine Corps warrant officer; Paul Phillips, a veteran who served on the USS North Carolina, and Alex Moskowitz, who served in battles of Leyte Island and Okinawa as well as WWII and the Vietnam War.

Trump also addressed the protests that have been occurring in the country in regards to police violence and racism. He specifically talked about Portland, Oregon, where some protests have resulted in violence and arson.

"American warriors did not defeat fascism and oppression overseas only to watch our freedoms be trampled by violent mobs here at home," Trump said. "We stopped those violent mobs very easily. All they have to do is say 'Please come in Mr. President.'"

Trump signed legislation in March 2019 instructing the U.S. Secretary of the Interior to designate at least one city per year as an American World War II Heritage City.

Wilmington was selected because of its wartime contributions and preservation efforts since the war.

That includes the production of 243 warships at the Cape Fear River by Newport News Shipbuilding and Drydock Company during WWII; the city’s headquarters for the Atlantic Coastline Railroad which allowed for the transportation of servicemen, equipment and materials; three prisoner of war camps that once held 550 Nazi prisoners, among other contributions.

The city’s preservation efforts include the arrival of Battleship North Carolina to the Cape Fear River in Wilmington in 1961 where it has been since. Also, the renovation and restoration of the Hannah Block Historic USO/Community Arts Center, as well as memorials throughout the city.

The effort to establish the WWII Heritage City program at the federal level and name Wilmington as the first city with the designation was led for 12 years by local WWII historian Capt. Wilbur Jones.

“As a historian, I believe pride and preservation of our history are the most important,” Jones said in an email. “Surely that will evolve into economic and tourism gains.”

Jones was recognized for his perseverance by the president at the event.

According to Jones, this new designation may impact the city through increased Battleship North Carolina visitation, a boost to the local economy, enhanced cultural appeal and reputation, preservation of North Carolina history and more.

“National designation as the first World War II Heritage City will strengthen Wilmington’s spotlight as a historical destination,” she said in an email. “We anticipate that even more visitors with an interest in history will travel to the area to learn more about Wilmington’s World War II home front heritage, which in turn, will provide a boost in visitation to historic sites and history tours, as well as to lodging, dining and other activities.”

The CVB will announce the designation via Wilmington’s social media channels, as well as through paid searches, Hufham said.

“We will also include a guest blog by Wilbur Jones about the designation, and include references to the designation in our visitor guide and website content, as well as via email marketing and in media materials and pitches that are applicable to history,” she said.

“Becoming the nation’s first American World War II Heritage City is a tremendous honor, not only for our city, but for the courageous men and women who fought in battle and those who sustained our nation while at war,” Wilmington Mayor Bill Saffo said in a press release.

"This spot is right now one of the most important military spots anywhere in the world," Trump said at the end of his speech. "Congratulations to everybody and thank you for making it come true."