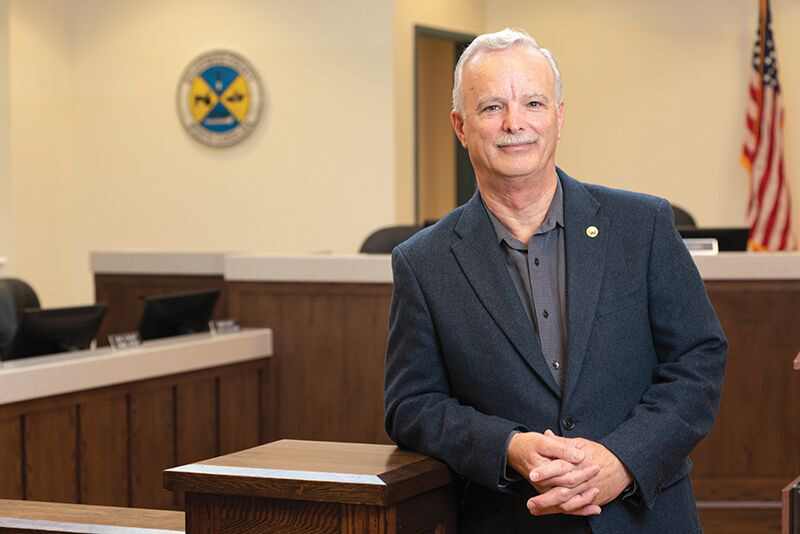 “I’m not afraid to step out and try something different. I think that keeps your career interesting,” said Woodruff, the manager of Brunswick County since October, a helm he was offered after serving as Pender County manager for four years.

Coming from a nearby county in the Cape Fear region’s tri-county area of Brunswick, Pender and New Hanover has helped Woodruff in his latest role.

Steve Stone, deputy county manager who has been a part of Brunswick County’s government fortwo decades, said recently, “There’s enough similarity between his prior job, and he knew all of the key players here. He really did hit the ground running. I’ve been very impressed. He’s been a great guy to work with.”

Woodruff had the same to say about the Brunswick County Board of Commissioners.

“This is very challenging work, when you’re working with the public and working with elected officials. We’re lucky here,” Woodruff said. “We have a very engaged board that is very professional. They do a lot of good things.”

Another of Woodruff ’s impressions of the five-member board, which includes Randy Thompson, Marty Cooke, Pat Sykes, Mike Forte and Chairman Frank Williams, is that they are unique.

It can be tricky, responding to the public’s needs.

“You’ve got to realize when you’re working with the public, you can’t please everybody and make every-body happy,” Woodruff said, “but you still listen to them and accept their ideas.”

Woodruff, who lives with his wife in Leland and has three adult daughters, replaced Ann Hardy. Hardy retired as manager of Brunswick County after six years in the role.

Before serving as Pender County’s manager from 2015 to 2019,Woodruff served as the manager of Beaufort County from 2011 to 2015and Camden County from 2003 to 2011. He began his career with the N.C. Division of Adult Probation and Parole.

Born in Roanoke Rapids, Virginia, Woodruff grew up in Emporia, a town in southern Virginia. He earned a bachelor’s degree in political science from Barton College (formerly Atlantic Christian College) in Wilson, North Carolina, and a master’s degree in public administration from Old Dominion University in Norfolk, Virginia.

“I was an adult probation officer when I got out of college and did that for about 10 years or so,” Woodruff said.

He then made the acquaintance of the Lee County manager, who put him in charge of the county’s department of youth and family services.

“It involved programs for youth as well, not just adult offenders,” Woodruff said “I did that for a number of years and really liked it. And I found that county government was much more efficient than the state government and less bureaucratic and just could get things done quicker.”

He started helping the Lee County manager’s office with certain tasks, including the board’s retreats and other special projects.

“I really got interested in that, and that was the first time I had in my life ever thought about county administration as far as being a county manager,” he said.

But a person doesn’t just one day decide to become a county manager and catapult to one of the fastest growing counties in the U.S. Camden County had a population of 10,000 when Woodruff was manager.

“The main goals that I have are to first off build on what Ann Hardy left in a place here because you know she had done a fantastic job for a number of years with really, really strong financial management. So that’s, to me, the main, ultimate priority.”

But keeping the county in good financial health is not the only focus for Woodruff.

“Being one of the largest, fastest growing counties in the state and in the nation, we’ve got to try to do our best to stay ahead and keep out with this growth, he said.

Thousands of people are moving to Brunswick County each year, a trend that is expected to continue over the next two decades. Many of the new residents are retirees.

“We’re blessed that we have a large retirement community here and that we continue to attract them,” Woodruff said.