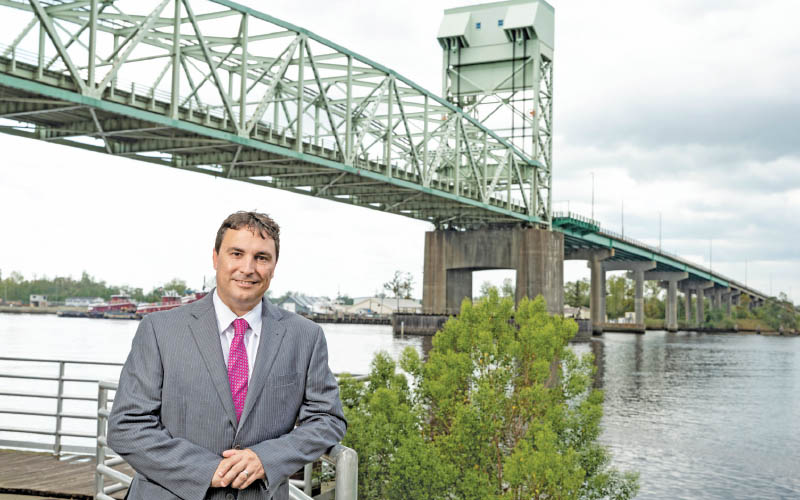 Mike Kozlosky, executive director of the Wilmington Urban Area Metropolitan Planning Organization, stands near the Cape Fear Memorial Bridge, the subject of a feasibility study that will look at the bridge’s replacement.
A long-studied project to plan for another route and bridge over the Cape Fear River between Wilmington and Brunswick County was put on the shelf this year.

The N.C. Department of Transportation announced in August that it wasn’t going to continue planning or design work on the Cape Fear Crossing study due to a lack of funding for the project carved into the state’s future transportation plan.

The news came amid changes being made to its new 10-year transportation plan this year because of the agency’s cash balance issues. NCDOT offiials have stated that the issues arose from the cost of responding to natural disasters, rising construction prices and hundreds of millions of dollars in Map Act settlements.

The state legislature, however, passed a bill signed by Gov. Roy Cooper in November that would fund $200 million to help NCDOT deal with those issues, while also putting the department under close financial watch.

To call for better funding and bring attention to area projects that are significant to the region, a new transportation advocacy group has taken shape in the area this year. The decision to halt plans for the Cape Fear Crossing spurred the formation of the group, an effort by the Wilmington Chamber of Commerce and the Business Alliance for a Sound Economy.

For the Cape Fear Crossing, NCDOT had narrowed the study down to six corridor options that could connect U.S. 17 and Interstate 140 in Brunswick County to U.S. 421 near the Port of Wilmington.

The routes received criticism, including during public meetings from some area residents concerned about what construction could do to neighborhoods and businesses.

Work was being done to narrow the study to one preferred route this year. But plans for a new bridge have been ongoing for several years.

About $11 million has been spent on the study, with nearly $5 million spent since 2013, NCDOT officials said.

Now that planning for the Cape Fear Crossing has been pushed to the side, NCDOT has turned the focus on the aging Cape Fear Memorial Bridge.

NCDOT officials in the region’s local division said a consulting firm was selected to help perform a feasibility study to replace the current bridge. The bridge has about 10 years left on the movable span and 20 years on its fixed span.

“The Cape Fear Memorial Bridge feasibility study is still in the preliminary stages. We hope to wrap it up in late spring 2020. This study will give us insight in what steps need to be taken next,” NCDOT spokeswoman Lauren Haviland said early this month, adding that the agency’s decision on the Cape Fear Crossing study remains the same.
For a full list of the top stories of 2019, click here.