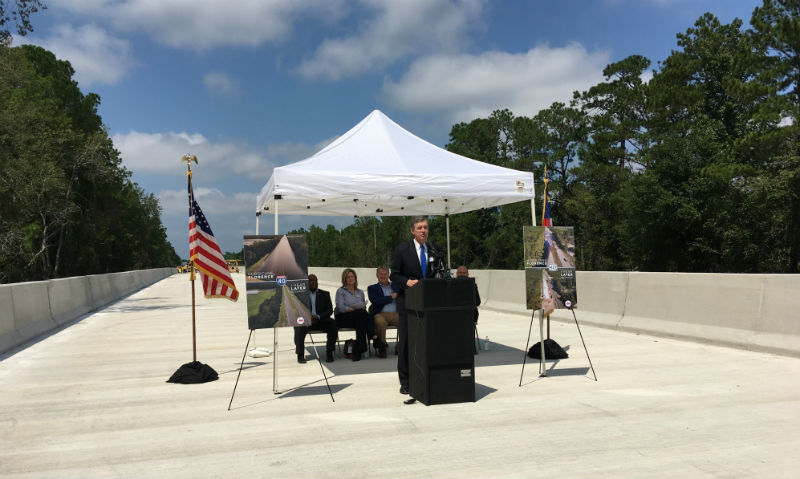 Gov. Roy Cooper and state officials gathered at the site of the new U.S. 421 bridge, which flooded during Hurricane Florence and is currently being rebuilt to withstand damage from future storms. (Photo by Johanna Cano)
Gov. Roy Cooper and state officials gathered Tuesday at the new permanent bridge on U.S. 421 to look back at recovery from last year's Hurricane Florence and discuss the state’s initiative to build more resilient infrastructure for possible future storms.

That portion of U.S. 421 was the site of major flooding during Hurricane Florence that made the bridge impassable, stopping transportation to the Wilmington area from that road.

"When Hurricane Florence came, a few days after, I was standing right over there looking at 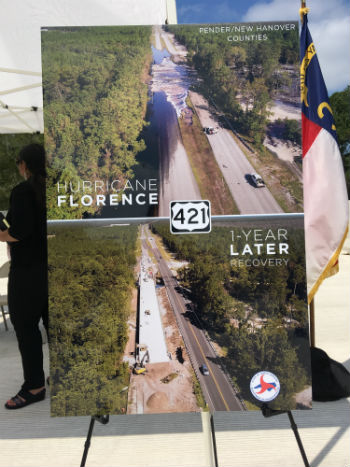 this catastrophe of a washed-out area of 421,” Cooper said. “We know how vital this artery is to southeastern North Carolina and particularly to Wilmington, and we knew that we had to get on the job quickly. We also knew that the water came in fast and hard and that we needed to think about building with a future storm in mind, building with more resiliency.”

The new bridge, near 5401 U.S. 421, is slated to open this month, said Karen Collette, division engineer with the N.C. Department of Transportation.

Next, an adjacent bridge will be built, which is slated to be done during spring 2020.

Once completed, the new bridges will be two lanes each and 560 feet long.

The new bridges opening soon were built to withstand the flooding that Hurricane Florence caused on the road, Collette said.

Building better and stronger in anticipation of other Florence-like storms that may come to the area was one central message from the Hurricane Florence anniversary briefing Tuesday.

“What you're standing on and what you see around us are going to become the new normal when it comes to infrastructure,” Michael Fox, chairman of the N.C. Board of Transportation, said. “We're going to have to build and rebuild with the weather in mind and the storms that we're getting today versus the storms we were getting even 20 years ago.”

During the briefing, officials also gave an update on Hurricane Florence and Hurricane Dorian recovery.

“Hurricane Florence brought historic devastation and flooding to our state,” said Erik Hooks, secretary of the N.C. Department of Public Safety. “The unprecedented storm required an unprecedented response and collaboration.”

The latest estimate from the North Carolina Office of State Budget and Management shows that Hurricane Florence caused $17 billion worth of damage in the state.

Besides tornadoes, downed trees and some flooding, the state did not have a lot of damage from last week’s Hurricane Dorian as compared to Florence; however, Cooper met with President Trump for aid.

“Yesterday I met with the president and asked for a federal disaster declaration for Dorian,” Cooper said. “I also pushed some reforms with U.S. Department of Housing and Urban Development (HUD) that can help speed up money coming back to North Carolina for long-term housing.”

Rebuilding with resiliency will be a model for the state moving forward, officials said.

“This bridge that we're dedicating today is a symbol of resilience for the future. We know how important transportation is to my mission for North Carolina that people are better educated, healthier, have more money in their pockets and have opportunities to live lives of purpose and abundance,” Cooper said. “Highways connect people, hospitals, homes, businesses, and we need to make sure that those highways are built in a way that they get people where they need to go as quickly as possible, but also that they are resilient to weather the storms that we know are to come.”