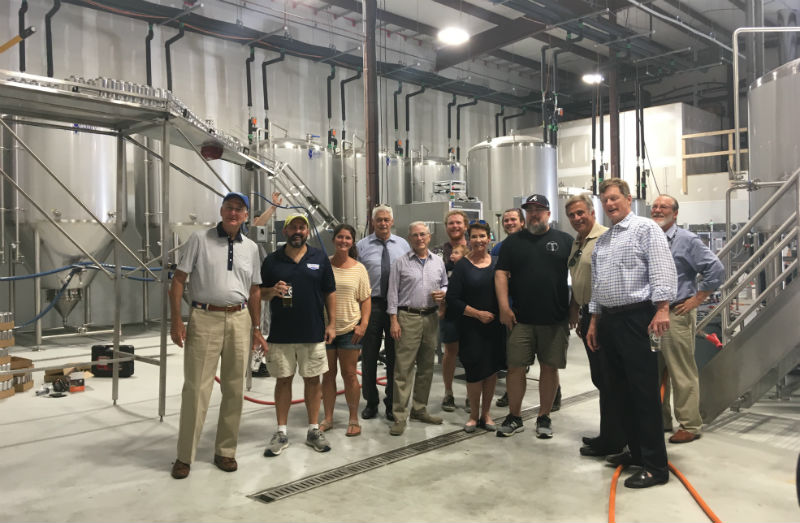 "We have seen an enormous bit of growth in the craft beer sector," said Ellie Craig, marketing director at Front Street Brewery.

The meeting Thursday was the second in a series of visits officials are making to area employers to engage with the private sector and receive feedback on ways they can collaborate and communicate better. 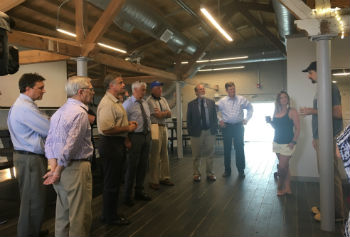 The first stop was Edward Teach Brewery (at right) at 604 N. Fourth St., where Jeremy Tomlinson, president of the Cape Fear Craft Beer Alliance, discussed the economic impact breweries have had on the Wilmington area.

“Altogether, there are over 400 brewery jobs, which would put us, if we combined everyone, we would be a top 25 employer in [New Hanover County],” Tomlinson said. “We have between $20 million to $23 million in [yearly] sales, also $1.5 million in tax. We think we're on the way up. Things have been going pretty well in the brewing industry, and we hope that continues.”

Tomlinson said the alliance had launched a new marketing campaign, “Craft on the Coast,” this week, which seeks to attract tourists from outside of Wilmington and the state to local breweries.

When asked by Wilmington Mayor Bill Saffo whether the brewery industry could be a “bubble” that potentially bursts, Tomlinson said there is still space open in the local beer market.

“When you walk into a bar and you have tap handles, how many are local beer? Maybe one or two. So, you have eight other tap handles that are from outside of the city. We don't want to necessarily take each other's handles. We want to take your Budweiser handle; we want to take your Coors handle,” Tomlinson said. “We think there's room for growth in that way.”

The second stop of the tour was at the second location of New Anthem Beer Project at 110 Greenfield St. in the South Front District.

The taproom and four-vessel brewery house the majority of the New Anthem’s production, including a lab room and a canning line system.

The location will be used to expand New Anthem’s beer production and distribution outside of Wilmington, said co-owner and head brewer Aaron Skiles.

During the second visit, some brewery owners said they have been set back by laws that haven’t kept up with the growth of the beer industry in the region and state.

Hayley Jensen, co-owner of Beer Barrio and Skytown Beer Company at 4712 New Centre Drive, said there were a lot of legal fees she had to pay and a lot of extra red tape she had to go through to be able to sell beer from the Skytown brewery to her Beer Barrio restaurant.

“I just feel like it's really hard for us to just healthfully grow,” Jensen said. “It's something that I know the city has embraced, the brewery culture, and I think it benefits all of us, but there are times that it gets frustrating and sometimes just upsetting or even emotional. I wish there was more communication and more support where it actually matters, which is our pocketbook as small business owners and then representation by the city itself.”

Jud Watkins, Wrightsville Beach Brewery owner and brewer, said that currently, brewery owners have to go through local, then state, then federal, then back to local procedures to apply for things like permits.

“We're regulated like we're some big, bad gun-shooting, smoking dope, whatever you want to say, that's the way we've always been treated as brewers,” Watkins said. “We've got to start breaking down these barriers and make it a little bit easy. That's the No. 1 frustration I'm hearing from our peers in the industry.”

Watkins also said that current tax regulations are not beneficial for brewers.

“There are some nice tax incentives all around us, but they're not here in Wilmington,” Watkins said. “As the area is starting to grow . . . we're always faced with ‘do I want to commute 30 minutes just to get a little bit of tax break?’ I grew up here and I prefer Wilmington over anything else, but tax incentives truthfully do go a long way.”

A good way to continue to work on these issues would be for a city council member to attend Cape Fear Craft Beer Alliance meetings or to set up a quarterly meeting between brewers and lawmakers, Watkins said.

“This was a casual introduction. I’m anxious to sit down and look at what's in place and then see how we can improve it,” Peterson said.  "We need to be supportive with good legislation and be reasonable with enforcement too.”

Saffo said elected officials are open to listen and address the concerns expressed by brewers.

“Anything that we can do to enhance the industry in the community, we want to do,” Saffo said. “We know it’s great for our community and for the state. We want to make sure that we were not overregulating you either and so that is when we come into play.”