Some Local Funding On Hold As State Budget Battle Continues 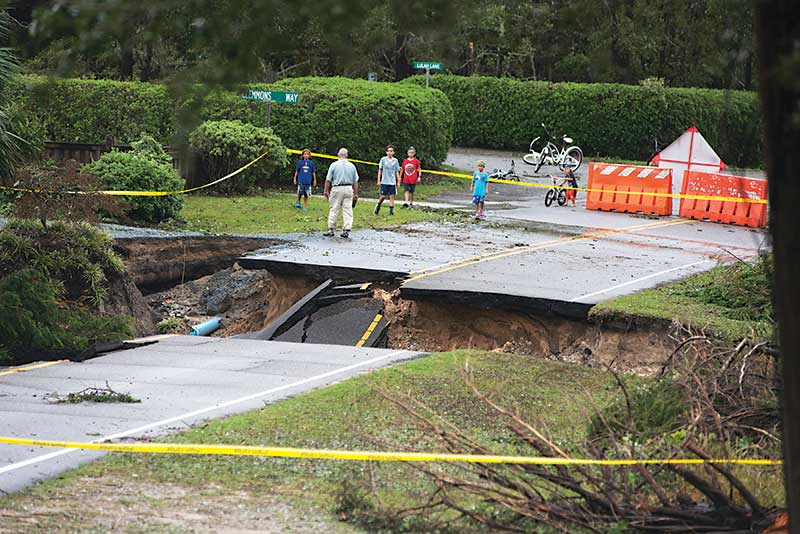 The start of the new fiscal year has begun but an impasse over the state budget has continued for nearly a month after Gov. Roy Cooper vetoed the budget in June.

While the budget is still being deliberated, last year's budget is rolling over, therefore, no shutdown is expected.

Rep. Deb Butler, D-New Hanover, and Sen. Harper Peterson, R-New Hanover, are in favor of the Medicaid piece to the budget that has been cited by the governor as one of his reasons for issuing the veto.

Amid the ongoing legislative session, Cooper visited Southport this month to discuss his position on Medicaid expansion at Dosher Memorial Hospital.

Rep. Frank Iler, R-Brunswick, and Rep. Ted Davis, R-New Hanover, however, have each expressed frustrations over the governor’s veto, saying important funding for local projects and resources is being held up.

All items on the budget that affect Brunswick County are on hold because of Cooper’s veto, Iler said.

“We don’t know where we are now that he has vetoed,” he said. “The one major reason seems to be Medicaid expansion. The expansion would add at least $1.8 billion to the state budget. Taxes would go up; that’s what it’s going to take to pay for it.  We would be taking from one and giving it to another. The citizens lose, except for the ones getting free health care. It’s unfortunate he is holding it up for that.”

North Carolina’s $24 billion budget this year has funding for Hurricane Florence recovery, which will affect the tri-county area.

About $94 million would be allocated to the Hurricane Florence Disaster Recovery fund for FY 2019-20.

There is no breakdown of hurricane recovery funds by county, said Gloria Whitehead, legislative assistant for Rep. Carson Smith, R-Pender.

“As Pender County is one of the counties that suffered the most it stands that we may gain the most,” Whitehead said in an email.

The state budget does include $5 million allocated in equal amounts to the towns of North Topsail Beach, Surf City and Topsail Beach for hurricane recovery projects that would benefit the towns and their coastlines.

In other water resource projects in the area, there is $14,000 in funds for Kure Beach Coastal Storm Risk Management and about $6.5 million for Wilmington Harbor DA Maintenance.

Funds could be carried over from the previous fiscal year for projects, such as Wrightsville Beach Coastal Storm Risk Management ($2.2 million), Surf City/North Topsail Coastal Storm Risk Management pre-construction/design ($255,000) and Phase 2 of the North Topsail Beach Shoreline Protection project ( $1.5 million), according to the proposed budget.

The state budget also would allocate money for projects from the Parks and Recreation Trust Fund for this fiscal year for the expansion of Lea Island State Natural Area off the Pender County coast in the amount of $4 million.

Under the budget, $1.5 million from the repair and renovation funds for state community colleges would be reallocated to be used to offset receipt shortfalls at community colleges affected by enrollment declines caused by Hurricane Florence,

It is unknown what is going to happen to the budgets for two Brunswick County organizations; the Ingram Planetarium and the Museum of Coastal Carolina, Iler said.

“Both of those (budgets) are gone until we have a state budget,” he said. “The veto wiped them out.”

Earlier this year, Davis filed a bill to appropriate $10 million for a $20 million expansion project at the N.C. Aquarium at Fort Fisher. This budget includes $5 million in funds, Davis said.

“That's $5 million of that project that the aquarium needs so they can move their plan forward,” Davis said.

Davis said there are also funds for the Fort Fisher State Historic Site.

“The Fort Fisher historic site, that's a $20 million expansion project down there to do a new visitor center, parking lot and a maintenance shed ... this budget includes the remaining $8 million that’s needed to do the project. So we're just sitting there waiting to go and we need an additional $8 million so that the project could be put out for bid and we can go forward with it,” Davis said.

There is also a continuation of the collaboration between the state department of public safety and the city of Wilmington to develop and implement the Quick Response Team (QRT) pilot project “to address the needs of opiate and heroin overdose victims who are not getting follow-up treatment,” according to the budget bill.

Davis said that he would like to see that turned into a permanent program with recurring funding.

He said the state’s film grant has $31 million allocated for the next two fiscal years.

And it lifted the grant cap for a production from $12 million to $15 million for a single TV series.

Both Davis and Peterson are strong proponents of the industry.

“So this opens the door for smaller budgets, but again it's a limit in what we can do. We've had two productions here last year," Peterson said about the changes.

The state budget bill also has a line item that outlines a collaboratory analysis for GenX and other related compounds at public water supplies to establish a water quality baseline for all sampling sites. The collaboratory includes identifying faculty expertise, technology and instrumentation within state institutions including UNCW.

Peterson said he feels this budget does not address the region’s water quality issue.

“They decimated the department of environmental quality, the department of health and human services, the attorney general's office … they've crippled these departments. The collaboratory sounds nice. It's just a study. They have been appropriated $5 million, I think another $1 million this year to extend it. But we have a crisis and you don't study crises, you act on a crisis,” Peterson said.

In other items, the Wilmington International Airport is slated to receive funding based on a formula outlined by the proposed budget. The funding is allocated by the latest state aviation economic impact study.

ILM is No. 4 in the state based on the study, which said it contributes about $1.8 billion a year, said Julie Wilsey, ILM's airport director, in an email.

“The formula allows the allocation to change based on future study results. There is also a cap on the larger airports to make sure the smaller commercial airports get an amount that can be used for infrastructure projects. Airports are extremely expensive to build and maintain we wanted to make sure all 10 Commercial Airports had enough money to do a project,” Wilsey said in an email.

With the latest economic study, ILM would get $5.2 million each fiscal year for a two-year total of $10.4 million, she said.  All of the funds would go to the third contract for ILM’s terminal expansion project, which is currently underway.