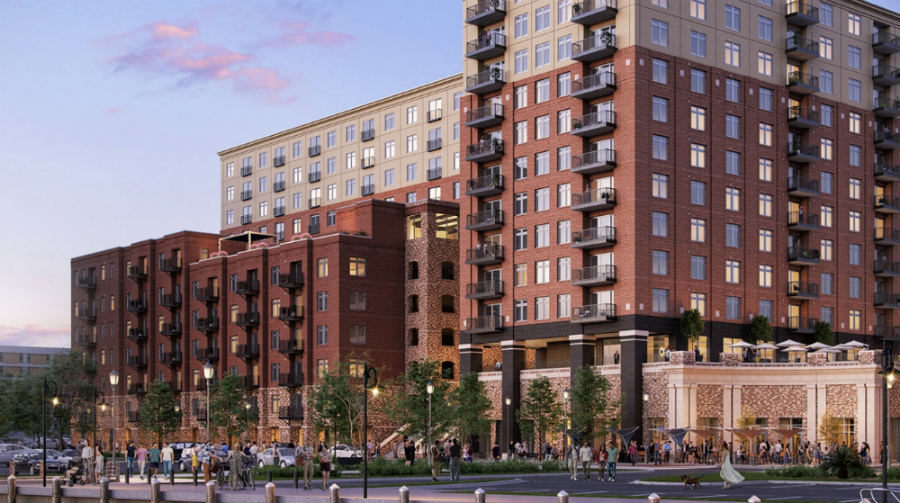 A proposed development ordinance that would impact the signage associated with the River Place development, currently under construction in downtown Wilmington, is on the agenda for the next meeting of the city's planning commission.

The proposed change to the city of Wilmington's land development code would allow for multiple signage on the face of the development, according to Lucien Ellison, the Wilmington partner of East West Partners, the developer of the downtown project, and project manager of River Place.

The 13-story mixed-use project at 200 N. Water St., which spans from Chestnut Street to Grace Street between Water and Front streets, is planned to have several retail stores on the first floor, he said. The project also includes apartments and condos.

The change was proposed by SCP-EW River Place LLC, specifically to address the issues at the River Place development, Ellison said.

"According to the current code, we could only have one attached sign on the building face. And I don’t think when they made this ordinance, that anyone anybody intended to exclude a building like that, we just didn't have any buildings downtown, like River Place," Ellison said.

According to planning commission documents, the proposed land development code amendment would allow buildings with five or more stories in the Central Business District (CBD) one sign per commercial tenant at a ratio of 1 square foot of sign area per linear foot of that individual building facade fronting on a public street or alley, with a maximum of 25 square feet for any attached sign.

It would also allow one wall sign above the ground floor per facade, with a maximum of 70 square feet for any attached sign.

This allows for multiple signs to be utilized by the development’s tenants, Ellison said.

Ellison said the developer has been working with city staff on this proposal since the fall.

“We needed to make sure that what we were proposing was not going to adversely affect what’s already there or what the city wants to do in the future. So it was definitely a collaborative effort between the developer and the zoning staff,” Ellison said.

The proposed development could help future projects within the CBD, like Project Grace, where the ordinance could apply, Ellison said.

So far, four business tenants have signed on with the River Place development; an Ash Aziz restaurant (not yet named), Axis Fitness, Mellow Mushroom and Rocket Fizz, a candy store and soda pop shop, Ellison said.

The development allows for a maximum of 12 tenants to be included within the project on the first and third floors, Ellison said. Multiple spaces, however, can be taken up by a single tenant.

The new ordinance, if recommended by the commission on Wednesday and approved later by Wilmington City Council, would allow each of the businesses to post signage on their respective storefronts, he said.

The development’s parking deck is on schedule for completion in November and the first condos are set to be delivered in January. The apartments are on pace to be ready in May of 2020, Ellison said.

“So, despite all the weather delays of 2018, Barnhill has done a great job of keeping it on schedule,” Ellison said.

The developer is working with general contractor Barnhill Contracting Co. on the project.

The Wilmington Planning Commission is scheduled to meet at 6 p.m. Wednesday at city hall, 102 N. 3rd St. in downtown Wilmington.