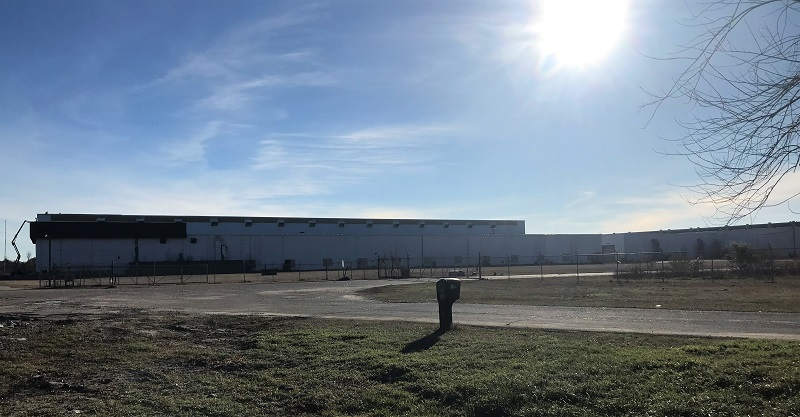 The former U.S. Marine Building in Navassa has peaked the interest of a New Jersey company looking to bring manufacturing business to Brunswick County. (Photo by Christina Haley O'Neal)
A grant application to support economic development efforts in attracting a New Jersey-based business and more than 200 jobs to Brunswick County has received the nod of approval from the county's board of commissioners.

Brunswick County Board of Commissioners voted unanimously Tuesday in support of the resolution to submit an application to the N.C. Department of Commerce for a Rural Development Building Reuse Grant to aid in renovations at the former U.S. Marine Building at 100 Quality Drive in Navassa.

The purpose of the request is for an initiative, called “Project Pavement,” which involves a New Jersey-based company interested in relocating its manufacturing business to North Carolina. The Navassa facility has been identified as a suitable location for the company’s manufacturing and warehousing needs, as well as anticipated growth within the company, the resolution states.

The company, or the nature of its manufacturing operations, have not been publically identified by the county or economic development leaders.

"We believe it would be an outstanding corporate addition to Brunswick County with the creation of the new jobs,” Early said.

That's a minimum creation of 238 jobs to be exact, according to the county's resolution, for the potential location on a Navassa property that has been vacant since 2008.

Available buildings has been highlighted by Early as one of the county's greatest economic development needs.

“This is a prime example of how having available buildings will assist in attracting new business and industry,” Early said. “This building came back on the market in July and within six months, we had a company that was seriously interested in Brunswick County because of the availability of an existing building.”

To use the former U.S. Marine Building, certain improvements need to be made, including site work, parking improvements and construction of a manufacturing room, according to the county's resolution. And the state grant would help offset the costs of those improvements.

The property has two buildings, with access to the Cape Fear River and CSX rail, and is listed for $8.5 million. According to the listing, the site is under contract.

Early added that the company’s interest in the facility is “solely based on the availability of that building that meets their needs for manufacturing.”

“I would like to give assurance that there are no environmental discharges into the river. It’s an environmentally friendly company,” he added.

The county's resolution of support is just a step in the grant process.

Early said Wednesday that there is a formal application process through the state, where the county submits the application on behalf of the proposed company.

As part of the process, Early said, "The state will actually come down and visit the building just to get an idea of what condition the building is in, and discuss the prospective renovations and upfit."

The application would have to be approved by the Rural Infrastructure Authority within the commerce department, he said. The RIA is a 16-member board that awards rural, Community Development Block Grant and Utility Account grant funds.

The authority reviews multiple applications at a time, approving or denying each application individually, Early said.

The authority's next scheduled meeting is in late February, Early said, adding that the application and visit from the state are planned to happen before that time.