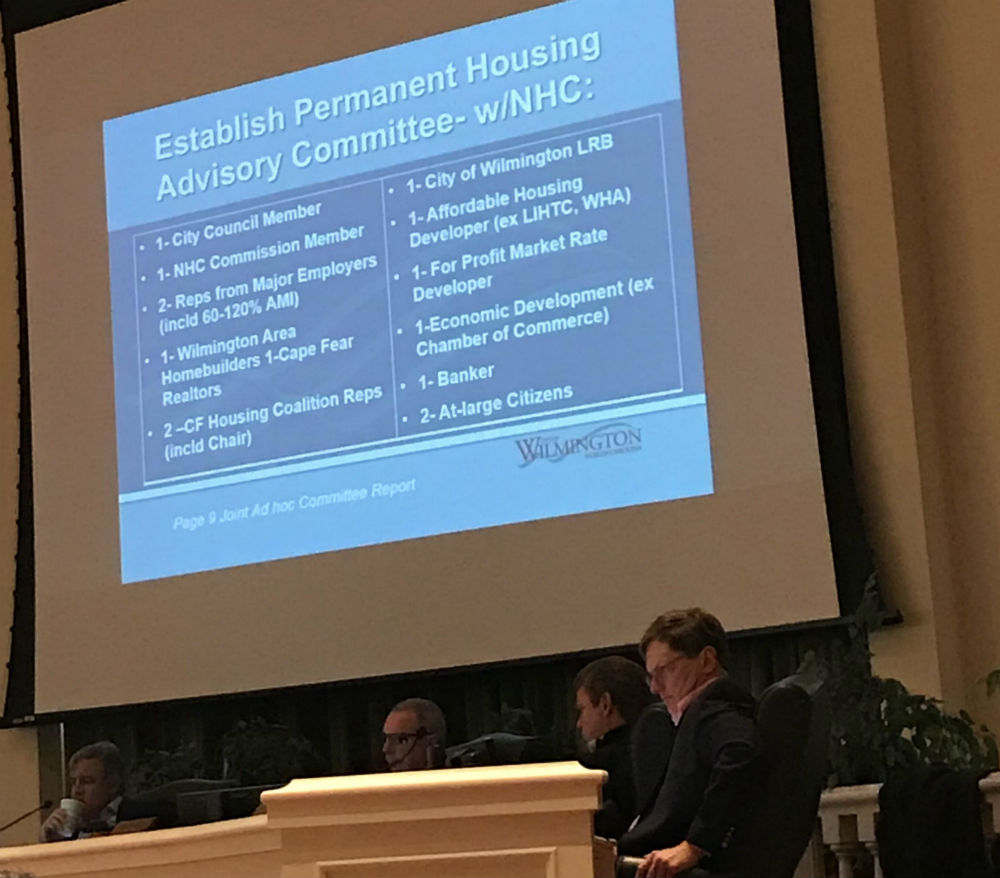 What’s it going to take to allow a developer to provide funds for affordable housing to the city of Wilmington?

That’s one of the questions city officials discussed Tuesday after the Wilmington City Council's agenda briefing, as one council member questioned why the city has not yet accepted $500,000 a development firm is trying to give.

The developer is Wilmington-based Tribute Companies, and the project involved is Arboretum West, a planned 360-apartment mixed-use community off Military Cutoff Road.

In 2017, the company had proposed to make 10 percent of the apartments, or 36 one-bedroom units, affordable at 80 percent of the area median income for 10 years. Some affordable housing advocates who spoke during a city council meeting in May recommended that it would be better if Tribute instead contribute funding to an affordable housing trust fund that the city could set up, according to meeting minutes, and in that way be better able to serve those having trouble finding anywhere to live in Wilmington that doesn't cost much more than 30 percent of their incomes.

The city has not yet created such a trust fund, though it does have other programs that seek to address some of its affordable housing shortage.

The topic of the funding came up Tuesday as a result of a presentation on affordable housing by Suzanne Rogers, community development and housing planner for the city. City Councilman Kevin O’Grady said to her, “We do have an immediate issue. We have a developer [Mark Maynard, president and CEO of Tribute Companies] who got [approvals] and said he would put some units into affordable housing, and we opened the opportunity for him to pay cash for a substitution ... He’s been waiting for us to tell him how to do that. Why can’t we get it done? What do we have to do to make this work?”

City attorney John Joye said the council needs to first come up with a set policy.

“As it stands now there is no guidance; there’s no parameter,” Joye told the council. “We don’t have that set forth. We don’t have that enacted by council. Staff can work on that to bring that forward to council, and with your blessing, we can put that in place.”

Joye later stated that an amendment to facilitate accepting the housing funds could be put in place temporarily rather than having to go through a longer process.

During her presentation, Rogers said the city needs 10,000 affordable housing units to meet the current demand, according to federal government figures. She revisited the recommendations made in 2017 by an ad hoc city-county committee on the topic of affordable housing, suggesting that one of the recommendations that could be put into place this year is establishing a permanent housing advisory committee in concert with New Hanover County.

It's a suggestion that has been repeated at sessions on affordable housing this year, including at a Cape Fear Realtors session on the area's affordability gap and the Cape Fear Housing Coalition's legislative breakfast last week.

The city could also amend its density requirements in its land development code because as of now, there’s no incentive for developers to include affordable housing to gain a density bonus, Rogers said.