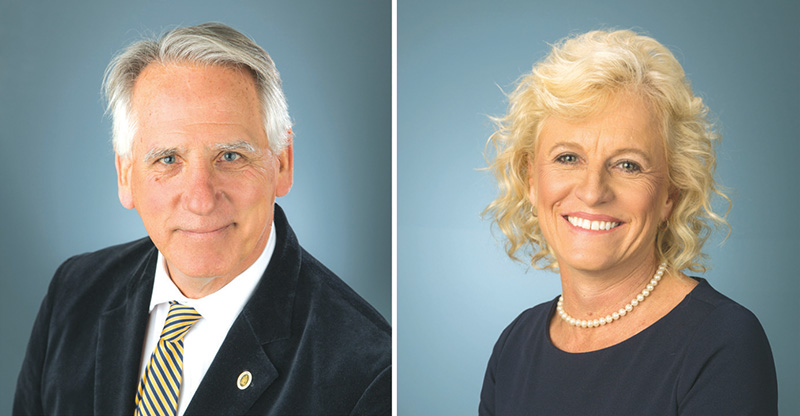 Rob Zapple and Julia Olson-Boseman
November election results left the New Hanover County Board of Commissioners with a Democratic majority, which has not happened since 1991.

Skip Watkins campaigned to retain his seat on the board but lost the election.
On Dec. 3 Zapple and Olson-Boseman took the oath of office during the New Hanover County Board of Commissioners’ regularly scheduled meeting.

The board elected Barfield as the board’s chairman and Olson-Boseman as the vice chair.

During the Business Journal’s Power Breakfast event ahead of Election Day, Olson-Boseman said infrastructure improvements was an important issue facing the county, including taking a closer look at traffic impacts before new developments are approved.

During that event, Zapple said the most pressing issue was GenX, stating that the county could not have economic development until that issue was resolved.

The county’s 2016 Comprehensive Plan is an initiative that is going to help the county with population growth and future land-use planning, Zapple said.

With his new role as chairman, Barfield plans to meet with the local delegation to address needs on both sides.

GenX, the opioid epidemic and economic development are some areas that Barfield said he plans on focusing on in the upcoming year.

Although the board now has a Democrat majority, Barfield said he hopes to unify both parties noting that he wants the board to work in a bipartisan manner to move the county forward.

In Pender County, there were three county commissioner seats up for grabs. All three Republican incumbents – George Brown, David Piepmeyer and David Williams – were re-elected.

David Rouzer was re-elected to the 7th district of the U.S. House of Representatives, winning over Kyle Horton and David Fallin. Rouzer has held that seat since 2014.

The N.C. Senate’s 9th district race was a close one, with the initial official county showing that Harper Peterson had received only 231 more votes than incumbent Michael Lee.

After a recount, Peterson widened his lead over Lee adding 200 more votes.

Peterson also said clean water is an important issue that needs to be addressed along with education and affordable housing.