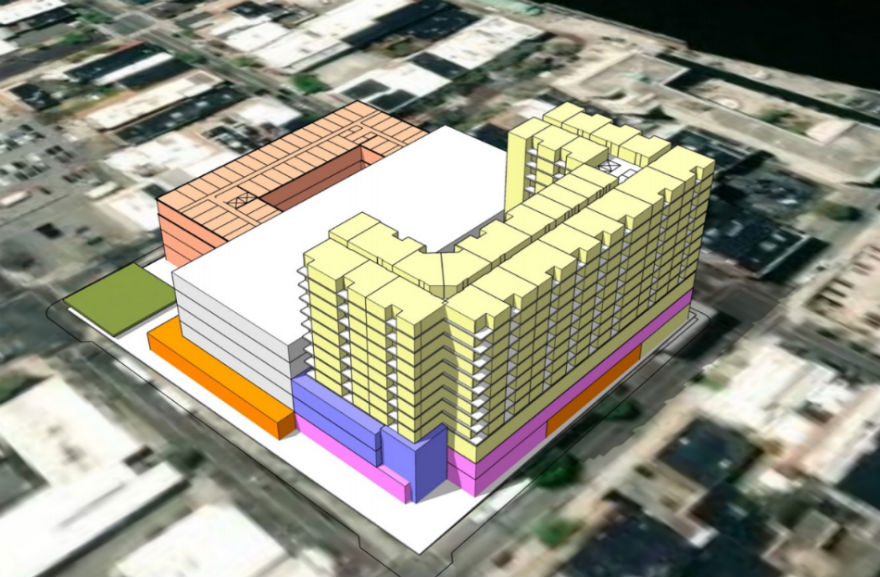 An illustration included in New Hanover County documents shows a conceptual plan for a downtown block by New South Ventures and Armada Hoffler Development Co., one of two teams vying to be able to submit more detailed proposals for Project Grace.

As officials prepare to take the next step toward a major public-private partnership, two development teams, including a Wilmington-based company, could be in the running to work with New Hanover County in redeveloping a county-owned block in downtown Wilmington.

Dubbed Project Grace, the redevelopment would involve a mixed-use project that could easily break the $100 million price point, with the potential for apartments or condominiums, hotels, offices and retail tenants along with new space for existing county facilities. The project would be built on the block where the main branch of the New Hanover County Public Library is currently located, bordered by Grace, Third, Chestnut and Second streets.

The Zimmer and NSV groups were the only two to respond formally to requests for qualifications (RFQ) the county issued in May for Project Grace. If chosen by the board, they'll submit more detailed proposals for the project.

“The purpose of this first step was to attract development teams that have the qualifications necessary to develop a project of this magnitude,” said County Manager Chris Coudriet in a news release Monday morning. “We received qualifications from two interested, and highly-qualified development teams, and the evaluation team unanimously determined to recommend the board ask for a development proposal from each team.”

The release stated that if the board decides to accept the county staff’s recommendation, the process would move to the second step with a request for proposals.

Full proposals from the development teams would be due at the end of November, according to the release, and then an evaluation of the proposals, including public input and an independent financial analysis, would take place in early 2019.

In one of numerous examples of Zimmer Development Co.'s projects, ZDC partnered with BrodyCo. Inc. of Greenville in working to create Wilmington's Mayfaire mixed-use development, including Mayfaire Town Center and Mayfaire Community Center.

Of Project Grace, Jeffrey Zimmer of ZDC wrote in his company's response to the county's RFQ, "This project is of particular interest to ZDC given that members of the Zimmer family have been residing in Wilmington, North Carolina for over 70 years, Wilmington is home to two family owned businesses, namely ZDC and Reeds Jewelers, Inc., coupled with ZDC’s retail and multifamily experience. We are very excited to be given the chance to provide New Hanover County with a high-quality, mixed use development, designed to meet and exceed the County’s commitment to historic character while providing modern aspects and usable green space as well. Having our corporate headquarters located in downtown Wilmington since it was founded in 1989 provides us with additional incentive to design and construct an attractive, profitable development that will benefit the downtown community for years to come."

Part of Project Grace would need to include the library and potentially a relocation of the Cape Fear Museum from 814 Market St.

"Upon selection, the County would work in concert with ZDC’s design team to refine programs for the museum and library," the Zimmer team's response stated. "These plans would include completed build out of the interior space as well as the exterior. Once those plans are finalized, leases would be drafted for both the museum and library to sign. The leases would have the terms and conditions pertaining to rental rates, common area maintenance charges, length of term and other relevant items.

"ZDC would utilize a similar approach with the retail component of the project as well. As opposed to the library and museum, it would build the shell space and the retailers would complete the interior construction to their specifications. ZDC would facilitate construction of the multifamily and hotel components. Upon completion, it would retain separate management companies to operate the day to day functions."

Michael Lemanski of NSV Development wrote in the NSV-Armada Hoffler team response to the RFQ, "We have significant experience in creating transformative projects that range from creating landmark buildings to dynamic city center destinations. NSV Development has more than 30 years of combined experience consulting for North Carolina local governments, including the City of Wilmington . . . Collectively, we have successfully developed and constructed 26 public-private partnership projects, with extensive on-going developments in Durham, NC, Fayetteville, NC, and Virginia Beach, VA." 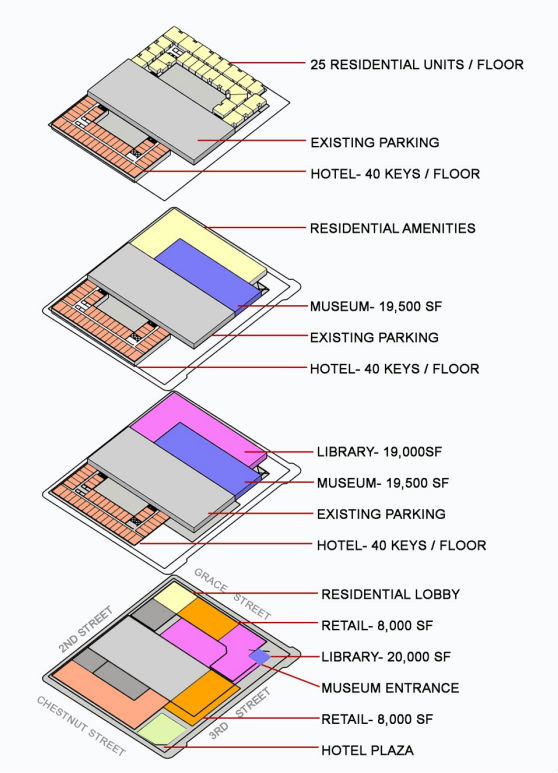 Describing their preliminary development concept (shown above with a more detailed illustration at right), NSV and Armada Hoffler officials wrote that the idea "meets the County's interests in maximizing the site with a combination of public and private uses, while increasing connectivity and vibrancy. Working within the height limit and other zoning constraints of the City of Wilmington, we propose a 2-phase project with a modern County library and Cape Fear Museum to be constructed in phase one along the Grace Street side of the project.

"This will allow the library to continue operations in its existing location through construction and require only one move, instead of requiring a move to temporary facilities during construction. The Library and Museum will share lobby space on the corner of Grace and 3rd Streets, with programmable green space at the entrance and street level retail along Grace Street.

"The Library and Museum spaces occupy the second floor and a portion of the third floor of the project. Approximately 225 residential units will be constructed over the Museum and Library. Our parking calculations indicate that there is sufficient space in the County deck to park these uses in the immediate term. Phase 2 of the project will replace the existing Library with a 100-key hotel. Currently, the hotel lobby is at grade, and an option exists to include additional street-level retail should the market support it at time of construction.

"Importantly, phase 2 of the project also proposed demolishing a small number of parking spaces at grade along 3rd Street to accommodate the street level retail needed to activate this critical corridor of the City."

In its response, ZDC shared some of the ideas its team has discussed through an Option A and Option B (pictured below).

"The site is divided into three main areas including: Apartments above street-level Retail (with one-level below-grade parking) on the north portion; the existing 7-story Parking Garage at the midblock; and one level of Office above a 120-key Hotel above the three-level Library/Museum on the south portion of the block," officials wrote in the response.
"Option A maximizes use visibility at each corner of the site. The Library and Museum are oriented towards a public plaza at the southeast corner, much like the existing site condition. A Hotel use is located above this, and has a street-level lobby at the southwest corner. 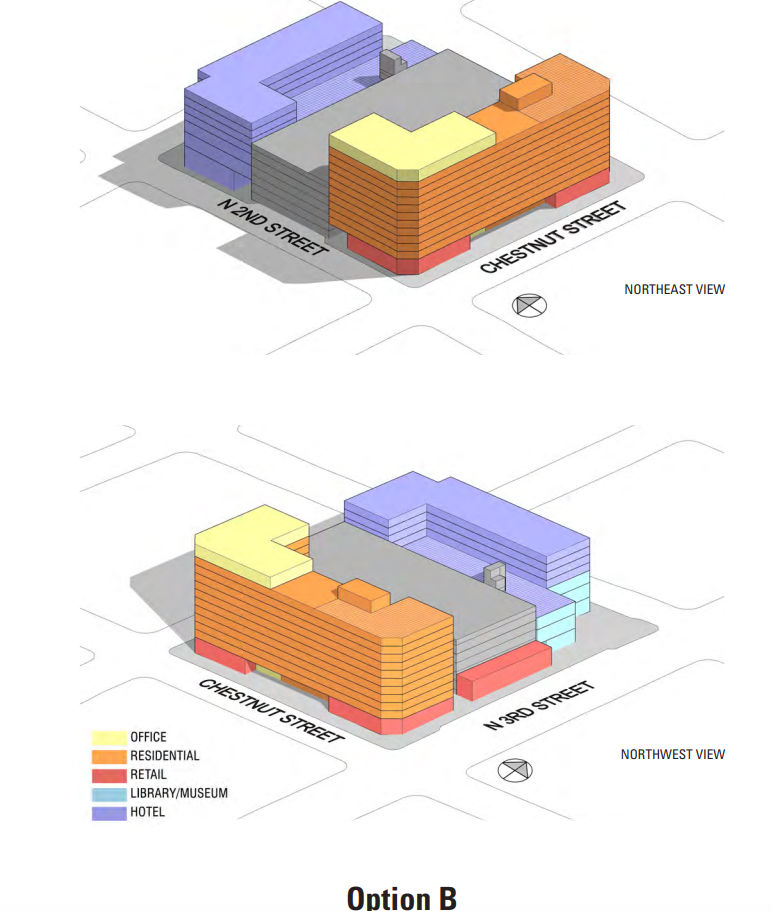 "Street-level Retail uses are oriented at the northwest and northeast corners of the block, including continuous in-line shops at Grace and 3rd streets. Pedestrian oriented streetscapes are continuous around the site – including a one-story Retail front-cap of the existing parking garage facing 3rd Street – with the exception of a portion of 2nd Street. The hearts of this arrangement are the public plaza and the pedestrian oriented streetfronts."

Option B would situate the library/museum and hotel differently.

"Like Option A, the site is divided into three portions; however, the Library/Museum and Hotel above are now located at the north portion of the block. The majority of the street-level Retail and Apartments above are at the south block portion. One full level of Office occupies the top floor of the south block. Street-level Retail is also located along 3rd street, serving as a visual screen for the existing Parking Garage. The public plaza is now positioned at the northeast corner, adjacent to the Library/Museum," ZDC's response stated. "Similar to Option A, each corner of the site has been maximized for visibility and entry for each use: the Library/Museum entry is oriented to the northeast corner; Retail uses are oriented along Chestnut Street and the southeast and southwest corners; and the Hotel is entered at the northwest corner towards the existing adjacent Hotels. The heart of the project is consistent: the public plaza and the pedestrian activity created by street-facing Retail and Hotel uses."