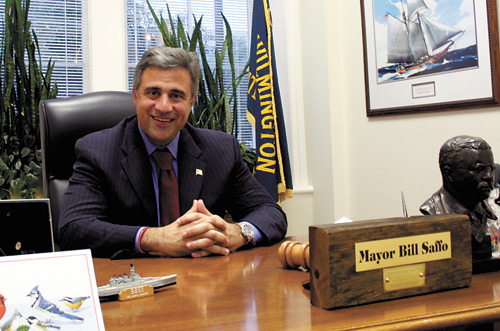 Now that he has won his re-election, Mayor Bill Saffo rolls up his sleeves to dig into this next term’s goals.

With an ambitious slate of projects from small business economic development to downtown revitalization plus a review of the city’s 5-year plan in 2010, it’s a good thing Saffo is one of those people who only needs a few hours of sleep
each night.

The Greater Wilmington Business Journal caught up with the mayor to hear what his plans for the Port City are in the next year.

Mayor: My goals for this next term are, I’m going to be focused very intently on economic development. In particular I think we need a small business incentive plan here in the city, which we do not have. Right now, our incentive is pretty much geared toward larger companies with larger infrastructure and improvement costs. I think we need to focus a lot more on smaller businesses. I think it will help us get out of this recession much quicker. You have a lot of small businesses here that are doing well. And, we need to find ways to help those businesses expand.

GWBJ: Would that be in the form of a tax incentive?

Mayor: Right now we base our policy on job creation. How many jobs are created and the type of investment the company is making as to what kind of incentive we give. For example, PPD was an $88 million investment, a thousand jobs. You get paid something for every one of those jobs. Obviously, we can do the same thing for small business but on a much smaller scale.

GWBJ: What are your other goals?

Mayor: I think the other thing I’ll be focusing very intently on is obviously trying to find a hotel. Not only for the convention center, but in addition to the convention center hotel, another hotel in the downtown area. One of the things that I see is glaring in the city of Wilmington, for the retail operators in the downtown area, is a lack of visitors’ accommodation in downtown. And without that visitors’ accommodation or those hotel rooms in our downtown area to help sustain those businesses down there, it will be very difficult for us to build enough residential condo units down there to make it a 24-hour downtown.
We had a study done when we were talking about building the convention center that had said we needed an additional 500 rooms in our downtown area in addition to the 271 that are at the Hilton Hotel. That’s one thing Savannah has, that’s one thing Charleston has, that we do not have. I’ll be working hopefully with a group of investors who will be coming in here to make that happen.

GWBJ: What are the lessons learned from the convention center process?

GWBJ: What other projects do you think build on Wilmington’s strengths?

GWBJ: What are your political goals? Do you want to run for Senator?

Mayor: If it so happens one day something opens up that I think I could make a contribution at a state level or federal level, I’d take a look at it. Right now my commitment is to the city of Wilmington. The citizens have elected me for another two year term. I’ve considered it, people have approached me about the Senate seat (soon to be vacated) by Sen. Boseman, I haven’t said no completely. But I haven’t really given it the serious consideration, I think, and the commitment it’s going to need for someone to go to Raleigh for those four or five days a week, because it is a very serious commitment.