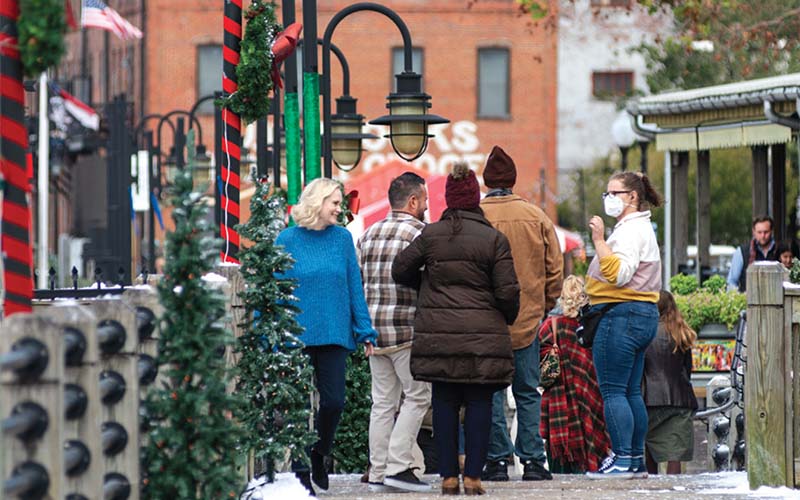 That Christmas-in-September theme played out on a broader scale as well. In addition to the Hallmark movie, down the chim­ney came announcements from film officials that one feature film and one streaming TV series were setting up on the EUE/Screen Gems lot in preparation for production this fall.

Feature film Scream 5, referred to as “Parkside” by its studio, has been setting up at EUE/Screen Gems and has been approved for a state film and entertainment grant rebate of up to $7 million, according to a Sept. 15 announcement from Gov. Roy Coo­per.

His announcement also stated Wilmington will see production of the second season of Hightown, a STARZ series from Lionsgate Televi­sion and Jerry Bruckheimer Televi­sion. That project, Cooper noted, has been approved for a grant rebate of up to $12 million.

Officials are optimistic that more projects will follow – possibly before the end of this year.

“We expect to see a steady stream of work here and fully expect to have another production arrive before the end of the year, with others lining up for next year,” said Johnny Griffin, director of the Wilmington Regional Film Commission.

Noting that 2019 was a “great year for us” and that 2020 started out strong until COVID-19 con­cerns shut down film production nationwide, Griffin said that all the elements that make Wilmington an attractive shooting destination arestill in place: the state’s incentive program, Wilmington’s abundance of experienced crew members and the presence of sound stages at EUE/Screen Gems.

But, he added, “some projects that had hoped to be here this fall are pushing into 2021 because of talent, distribution issues, etc. During this whole COVID time the interest in North Carolina has not diminished. The only issue has been COVID and projects being able to go forward. Studios are telling us, ‘When we get the greenlight to move forward, North Carolina is definitely on our list of locations.’”

Bill Vassar, executive vice president of EUE/Screen Gems in Wilmington, said he is almost certain that one additional project will land here before the end of the calendar year.

“We did a project with them last year, and they had a really good experience,” Vassar added. “They could even go back-to-back with a second project.”

While Wilmington’s Christmas- in-September bundle consisted of three projects, a bundle of two projects came down the chimney for the greater Charlotte area. One is a made-for-television movie, A Nashville Christmas Carol. The other is Delilah, a new TV series from Warner Bros. Television for OWN.

The film industry is dealing with a classic situation of supply and demand. Demand for new content is on the rise from a public confined to their home screens, while creation of new movies and series has been held up until the recent development of production protocols that would protect against the coronavirus. 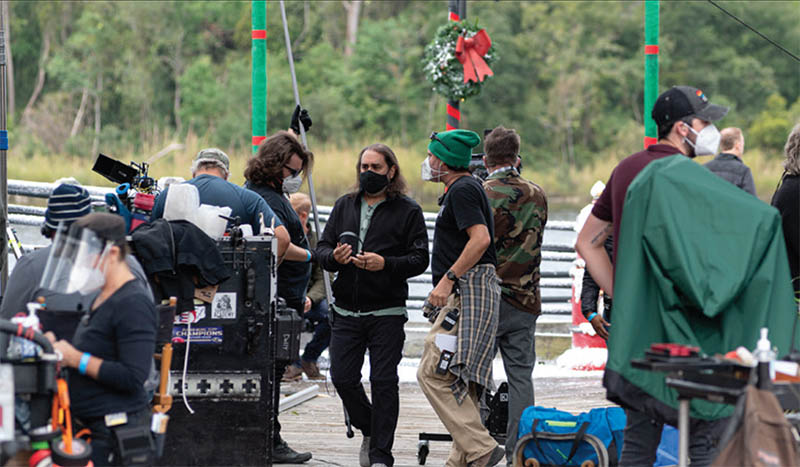 Asked if he shared Griffin’s and Vassar’s optimism about projects heading to North Carolina, the director of the N.C Film Office in Raleigh was enthusiastic.

“Absolutely,” said Guy Gaster. “The industry is getting back up and going worldwide. There are projects that want and need to go right away. The fact that we have projects starting within the next 45 days is a signal to others: ‘If you are ready to go, North Carolina is a place you can get started.’”

Besides having the experience and capacity to handle multiple projects on short notice, North Carolina appears to be benefiting from two changing situations.

The first is the impending expiration of House Bill 142, enacted in 2017. The bill repealed the state’s HB2 – the state’s so-called Bathroom Bill – and replaced several of its provisions with less-stringent ones. That legislative modification was enough to lure back to the state several studios and others in the film industry who refused to bring projects here while there was strong anti-transgender legislation on the books.

“HB142 expires Dec. 1; that’s what has been agreed to by the politicians,” Gaster said.

But some in the film industry weren’t mollified by HB142 and continued to give North Carolina a wide berth, Griffin said.

“We’ve still got some companies that absolutely will not come here, period. But they have all said, with the bill set to expire at the end of this year, ‘We will come there and do business.’ I hope that will open up more business for us.”

Griffin said he is in conversation with some companies that are eyeing that Dec. 1 sunset and will update them on what happens.

Vassar said he has talked with the head of incentives and production for a major Los Angeles-based studio that put North Carolina on a restriction list. Because of the anticipated HB142 expiration, its position is changing.

“We’ve been taken off the restriction list, so they are allowed to look at North Carolina again,” he said.

The second evolving factor is studios’ attitude about North Carolina’s grant incentive. When the state’s incentive program changed from a fairly open-ended tax credit program to a capped grant rebate program in 2014, studio executives were reluctant to commit to projects here, fearing that the grant pool of $10 million per year would be dried up before they put in their claims.

Since it was initiated, however, the grant pool has increased to $31 million per year, and the General Assembly has made the program permanent.

“What has made the grant incentive more attractive is that it has been stable,” Griffin said. “What productions don’t like is, [a state] gets a new incentive; it takes studios a while to study it and run some models. Then they tell their team, we approve it, and they start looking for projects. It takes six months or more to get in the groove. Then the legislature changes it.

“We now have $31 million a year and have been able to carry over unused funds. It’s encouraging, and productions see that. They like a simple program like ours where you do an audit, then the check gets cut.”

Griffin said the state’s film incentive does have limits. There is a cap, and when the state’s commitments approach that cap, producers become wary. And, of course, any film incentive program exists at the mercy of the General Assembly.

“Our industry monitors the mood of the [state] legislature,” Griffin said. “Occasionally we do see bills come up that would take the knees out from under us.”

Increasing numbers of state legislators have recognized the benefits to North Carolina from film activity, officials said. And, said Gaster, film study programs in several North Carolina schools – including Cape Fear Community College and University of North Carolina Wilmington – have been an asset.

“It goes to the training of a workforce,” he said. “The program at UNC School of the Arts has gained national attention, and that has really helped. Part of the team behind Halloween and Eastbound and Down have strong UNCSA connections and wanted to film in this area.”