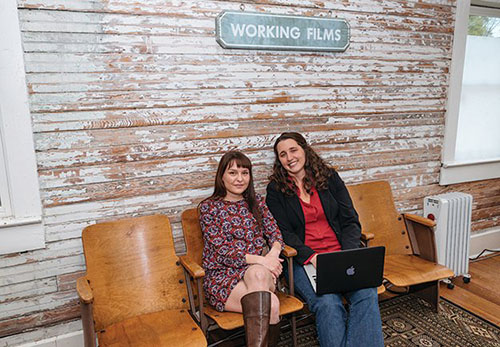 “This is a tremendous gift that will transform our organization,” said Anna Lee, who is co-directors of Working Films along with Molly Murphy.

Working Films uses short films and documentaries to raise public awareness on important issues of the day. Following a 40,000-ton coal ash spill in the Dan River in 2014, Working Films tracked down six short films for communities to use to explain to their residents what coal ash is and share how other areas affected by coal ash responded.

“Short films allow audiences to connect with each other and issue experts and make plans for solutions,” Murphy said.

With the grant from the Chicago-based MacArthur Foundation, Working Films is now taking its work to the next level and launching a new program called “Docs in Action.” This will allow them to get involved in the production of new films and for the first time, be able to provide funding to filmmakers.

“Funding short films is an exciting new chapter for Working Films and a natural extension of our recent work,” Murphy said. “There’s not a film yet on everything we are working to address … We want to support the highest caliber of filmmaking with high cinematic value covering issues yet to have been told.”

Docs in Action will prioritize funding for minority filmmakers and will help get their films distributed for viewing, Working Films officials said.

Topics will include clean energy, economic and racial justice, immigration, women and work and equality in pay, they added.

Working Films is one of only 15 nonprofit organizations nationwide selected for the grant from the MacArthur Foundation Journalism and Media program.

“MacArthur is a prestigious foundation with great respect in documentary, nonprofit and journalism sectors,” Lee said.

“We are so grateful to the MacArthur Foundation for investing in our vision … Our job is to help filmmakers connect with people who can make change happen,” Murphy added.