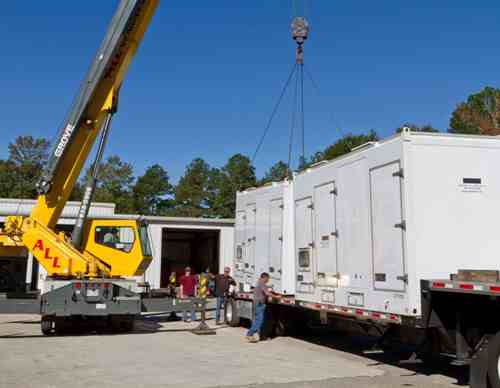 Filmwerks employees load generators onto a truck. (File photo)
For the past week, Mike Satrazemis and Chad Corbin have been on the road, hitting three major sports events as they check their equipment that is facilitating broadcast of these events.

Satrazemis, co-owner of Rocky Point-based Filmwerks International, and Corbin, the company’s general manager, started in New Orleans, site of WWE’s Wrestlemania. From there they traveled to north Texas for the NCAA’s Final Four this past weekend. Now they are in Augusta, Ga., as the Masters Tournament is about to get underway.

“Our shop has been very busy, getting all the trucks ready to go out at the same time,” said Anneliese Dauerer, Filmwerks’ finance and human resources director.

Multiple engagements aren’t unusual for the company, which provides everything from huge generators to custom stages for movie and TV productions, conventions and other special events. But honoring simultaneous commitments for events this large is a new experience. Never before has Filmwerks enjoyed the capacity to handle both the Final Four and the Masters – with a bit of wrestling tossed in.

Last fall, Satrazemis was contacted by NEP, a “huge player” in the production industry, Dauerer said. NEP was interested in selling the equipment belonging to its Live Power division.

“We worked on it for the last several months of 2013, and [the purchase] turned out to be quite an opportunity for us,” Dauerer said.

When Turner Sports and CBS Sports called this time, Filmwerks was able to provide the four big generators and miles of cable necessary to make sure there would be sufficient power to broadcast the frenzied final games of the NCAA men’s basketball tournament at the AT&T Stadium in Arlington, Texas. It even provided a mobile stage outside the stadium for hospitality and entertainment, Dauerer said.

“It’s a huge stadium; you need to make sure you are backed up and redundant,” Dauerer said. “It really comes down to not so much getting the generators parked, but getting the production truck in the right spot, getting the cables distributed the way our clients wanted and to code, which is important for larger events.”

As four of Filmwerks’ generators powered the AT&T Stadium, Satrazemis and Corbin flew to Augusta, where their crew was parking, unloading and testing equipment in preparation for the golf tournament.

As it works with CBS Sports to help broadcast the Masters, Filmwerks is enhancing its relationships with two Live Power clients it hopes to serve: NBC Golf and the Golf Channel, as the company continues to grow and add capacity.

“We’ve definitely seen steady growth over the last few years, but since the Live Power acquisition, we’ve had the fastest growth over the shortest amount of time,” Dauerer said.