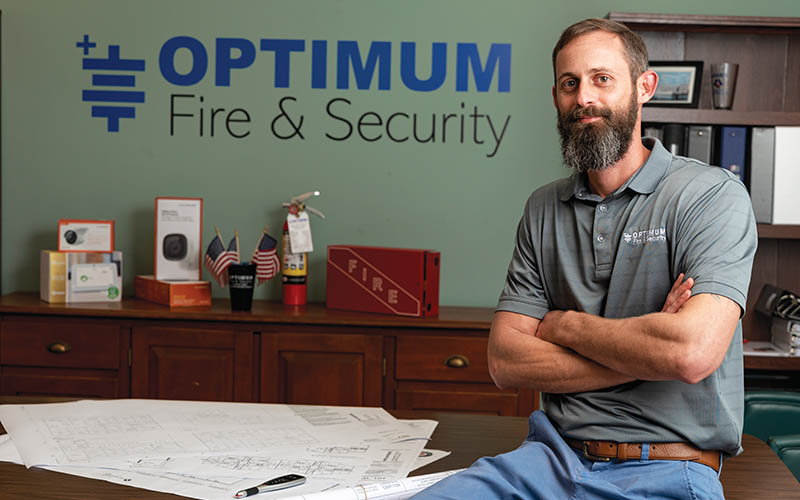 Beginning with two employees, he has built the business to more than $5 million in annual revenue and 36 employees working in more than two dozen states on federal, commercial and residential jobs.

The newer residential services division “takes everything we’ve learned on these very large projects and scales it to the residential piece, so you’re getting the home project with the same knowledge base as the multi-million-dollar projects,” Oates said.

Born in Illinois, Oates moved to Hope Mills, North Carolina, with his extended family when his grandfather bought the southeastern sales and distribution rights to Hostess Cakes. Several family members also moved and worked in the business.

Oates attended middle and high school in Hope Mills and worked summers for his uncle’s fire and security business in Charleston.

After graduation, he joined the U.S. Marine Corps. He anticipated a military career and an education paid for by the government.

“Unfortunately, while I was in boot camp, the towers came down. That changed everything.”

He was 18, alongside many other 18-year-olds watching horrifying videos of world events on the squad room TV. By March 1, they were in Iraq.

Over the next four years, Oates was deployed for two-and-a-half years. That changed his notion of making the military a career. He left the military and went into fire alarm and security training, building on the experience working for his uncle.

Much of his work was out of state for long stretches. Meantime, he had married a Wilmington resident and their first child was on the way, so he traded working away from home for a steady gig with a local territory.

That job placed him overseeing a priority project at Camp LeJeune, where local commanders were getting a lot of media scrutiny.

“I did a pretty good job on it, enough that the fire chief recognized it,” Oates said.

After five years, he transitioned to a Wilmington-based General Services Administration operation specialist position for federal courthouses on the East Coast. He oversaw all the mechanical and janitorial contractors for those buildings.

While there, he started Optimum with the intention of working toward his 20-year military retirement while building his after-retirement business. Last year, a change in the law changed all that. “I couldn’t do both,” Oates said.

To work until military retirement, he would have to shut down Optimum, which was then five years old with 25 employee families depending on him.

He said, “I turned in my resignation [to the government] and pushed all of my eggs into this basket. The company will be six years old in February.”

He explained how a simple security system can provide oversight for an elderly parent or for a child going off to college. For the elderly, or infirm, the system includes an under- mattress mat that records when the person gets into and out of the bed. It monitors the medicine cabinet. It learns the person’s expected routine and matches activity to it.

The same video analytics can be used to automate a house so lights and temperature are automatically adjusted and more.

“The systems we selected are multi-functional. If you’re more concerned about saving money we can do a lot of things to save you money in your home,” Oates said. “It will recognize if you’re home. It’s using the technology that’s available to us for a good purpose. It’s all information data gathering to predict what’s going to happen next to provide a secure network.”

He has 36 employees now, 17 of whom are also veterans of all service branches except the Coast Guard, he noted.

Oates said, “It allows us to take our vets getting out of the military and utilize their GI Bill for this so they can learn a trade while getting paid.”

The proximity to Fort Bragg and Camp LeJeune makes it a natural fit.

He’s also seeking to acquire another local company to expand, especially on the residential side.

“It’s our newest side. We put a lot of time and effort into it,” Oates said. “We have perfected the security side of it. I know what we’re selling is second to none.”