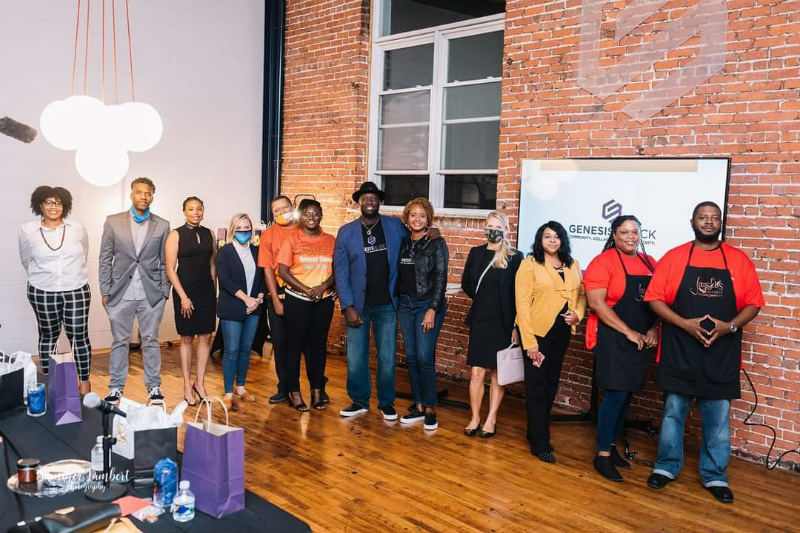 The area business owners whose presentations earned the judges’ nod were Travis Corpening of All Your Cool Ideas, an education startup that brings STEM awareness to young people of color; Ada Suter of Innate Health Family Chiropractic & Wellness; and William and Shemeka Stokes of Jay Ski’s Rub-a-Dub, a purveyor of food rubs.

Those young companies were among eight Minority- and Women-Owned Business Enterprises (MWBEs) that presented their concepts Tuesday to a panel of four judges at Demo Day, part of University of North Carolina Wilmington’s annual Minority Enterprise Development (MED) Week.

“The session went very well; we had a great turnout,” said Girard Newkirk, a tech entrepreneur and co-founder of Wilmington’s Genesis Block.

A coworking and incubator space in Wrights Alley downtown, Genesis Block is designed as a center where people working on tech startups and small businesses can come together in a creative environment to collaborate.

The concept of Demo Day was to provide a platform for women- and minority-owned businesses in the Cape Fear area to showcase their talents and products in front of a live MED Week audience and get feedback from the judges. In addition to the mentoring and networking opportunities winners will be given, there were cash prizes of $2,500, $1,000 and $500 from Cape Fear Collective as well as gifts from the Cameron Art Museum, Newkirk said.

Tracey Newkirk, a business consultant, founder of Wilmington’s African American Business Council and co-founder with her husband of Genesis Block, said she was pleased with the racial and professional diversity of the Demo Day judges.

“One of my goals [for the event] was to showcase collaboration,” Tracey Newkirk said, adding that Genesis Block’s operating philosophy is “community, collaboration and creativity.”

“For that [Demo Day] to be our first event, it demonstrated who and what we are and what we want to bring to the Wilmington community,” she said.

Girard Newkirk said that Genesis Block had three primary goals for the event.

“We wanted these businesses to present in a real-world environment to get feedback, provide the community a chance to see these great businesses, and to [showcase] what we do at Genesis Block so we can collaborate, create ideas and pair these businesses with resources to help them succeed.

Genesis Block was recently selected as one of six startups from North Carolina to participate in this year’s fifth annual Google for Startups Black Founders Exchange. The virtual event, which kicked off this week and runs through Oct. 29, will feature alumni BFE founders weighing in on some of the most pressing issues of the day, according to a news release.

MED Week in Wilmington featured a range of sessions – most held virtually – tailored to small businesses owned by veterans, women and minorities. It wraps up Saturday.