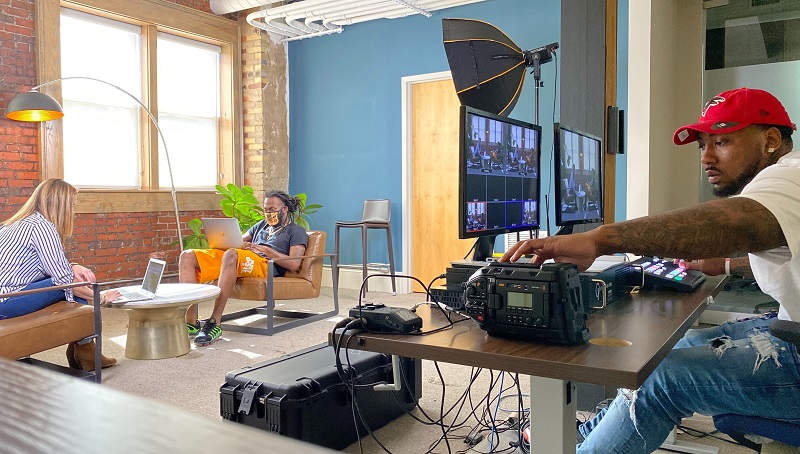 TRU Colors, shown here working out of Untappd headquarters in downtown Wilmington, is preparing to bring online new video content next week. (Photo courtesy of TRU Colors)
TRU Colors is moving forward with a new initiative as its leader, George Taylor, sharpens his focus on the company and its mission.

TRU Colors, a concept first announced by Taylor in 2017, is currently reconstructing a building it purchased last year for the site of its future headquarters and brewery operation.

But as the timeline on that project and others have been impacted by the COVID-19 crisis, the company has pushed the roll-out of a video production and programming concept to next week.

The company is a local for-profit organization that employs gang members as a way to combat street violence and the ripple effects violent gang disputes have on the community.

Taylor, TRU Colors chairman and CEO, announced Monday that he stepped down as chair of the Untappd board of directors to focus on other projects. The news comes after Wilmington-based Next Glass, the parent company of Untappd, announced it received a strategic investment from growth equity firm Providence Strategic Growth.

In an email, Taylor said, "I couldn't be more excited for the Untappd team as PSG is a tremendous partner and together, I know they will do great things around the world."

Taylor is now turning much of his attention to TRU Colors, he said this week.

“For me, not being involved with Untappd any longer gives me a tremendous amount of time and my primary focus now is on TRU Colors," Taylor said.

Taylor is joined by his son Kurt, who stepped down from his position as CEO of Untappd to be involved in TRU Colors' strategy and investor relations.

“We’re still filling out what that’s going to look like. I’m starting in an advisory capacity and focusing on strategy, mostly as it relates to the brewery side as well as helping think through, from an investment standpoint, what the remainder of the year and 2021 will look like,” Kurt Taylor said.

TRU Colors is currently working with 30 gang members and would like to hire more in the future, George Taylor said, adding that the firm had a new class of 12 anticipated to come into the company's programming, an eight-week boot camp, just after the COVID-19 crisis began.

The coronavirus crisis has presented some challenges for the company, as it works to help manage conflicts digitally, through platforms such as Zoom.

“We’re still very active in making sure that we do what we can to try to stop any kind of violence. Obviously, that’s more challenging when you can’t go out and talk to people face-to-face. Trying to defuse issues between gangs or people in general over Zoom is not as easy as face-to-face, as you might imagine,” George Taylor said. “But we are still doing it every day.”

But as TRU Colors deals with the impacts COVID-19 has had on how it carries out its social mission, the organization is also using the current crisis situation as a time to roll out its latest initiative, TRU Colors TV.

“The purpose of TRU Colors TV is to try to share an understanding and information to bring our community together. There’s so many different communities within Wilmington and across the country that don’t really understand what’s going on in other communities in their own city. And so that’s really our primary goal with this is to try and share information that drives an understanding and hopefully begins to drive unity and brings the city together,” George Taylor said.

Out of TRU Colors' studio, the company has already rolled out videos, including a video aired at the ESG & Impact Forum Film Festival at the United Nations in New York City last year.

TRU Colors TV allows the TRU Colors social mission to get out into the community on a digital platform, including Facebook Live, YouTube, Roku and AppleTV. The company will begin rolling out components of its content next week.

Part of that is a cooking show called “Cooking Up Conversations” and features an active gang member involved with TRU Colors’ mission and the head of the TRU Colors DisruptU curriculum.

“DisruptU curriculum is what we use internally and we’re getting ready to expose it externally to the communities that we care about downtown. It’s everything from working on how to remove limiting beliefs to budgeting … to professional skills. And so we are going to expose that externally through shows that we put on TRU Colors TV," George Taylor said.

TRU Colors TV will also feature a workout show Monday, Wednesday and Friday mornings, starting next Friday. And there is also going to be an interview show where Press Bethea, TRU Colors' brewery operations specialist, will be interviewing brewers locally and outside of Wilmington.

George Taylor is also working on his own interview series, “What’s It Like?,” a working title.

“People that you wouldn’t normally see on a typical show,” he described. “And my goal is to interview people, for example, it might be someone that grew up in difficult situations and was homeless and went through a very challenging life."

The group is also launching its e-Sports tournaments which will be streamed on TRU Colors TV. It consists of 32 players for an online video game basketball tournament, with a significant prize for the winner, he said.

The content is only being marketed for the Wilmington area at this time, he said, with plans to take it into broader markets. The ultimate goal would be, after it's tested and refined, to make it to platforms such as Netflix and Amazon, George Taylor said.

The gang members TRU Colors employs are also continuing work on being community ambassadors and involved in the company's marketing, finance or human resources.

“I think one of my roles right now as a leader is to make sure all of our guys are busy and active in the mission side of our business, that's where we're focused at this time. And to make sure that those who are supporting us understand that we're moving forward and nothing has changed, other than the timeline is a bit blurred because of COVID-19. But we'll sort that out as more information comes in,” George Taylor said.

TRU Colors is currently overhauling the dilapidated Century Mills property at 715 Greenfield St. for its office space, brewery, restaurant and more. For now, the company is working, as much as it can, out of Untappd headquarters in downtown Wilmington.

“When we bought the property, it really was just a shell," George Taylor said of the Century Mills site. "In fact, we have spent a lot of time cleaning it up and getting ready for construction … the building is just now getting sealed up,” Taylor said, adding that windows will soon go in.

Plans have not changed for the building, Taylor said, adding that he anticipates the building being complete sometime before the end of the year.

In response to a question about getting the company’s first beer out of its brewery, Taylor said, “We’ll be lucky if we get something out at the end of the year. First-quarter is where I look right now.”

When asked how the company continues to fund its initiatives, on top of renovating the property it purchased for $950,000, George Taylor said, “TRU Colors, from day one, has always been through private investment. It’s always been that way and still is.”

TRU Colors is being funded by multiple investors, Taylor said, declining to share details on how many or how much the company has raised since its formation.

“TRU Colors is very fortunate that we have so many truly dedicated corporations, investors, and partners who have hardly even blinked with all that’s going on, which is pretty remarkable," George Taylor said. “People believe strongly in what the TRU Colors team is doing and they know that once we finally get out the door, we can solve the problem we are trying to solve.”