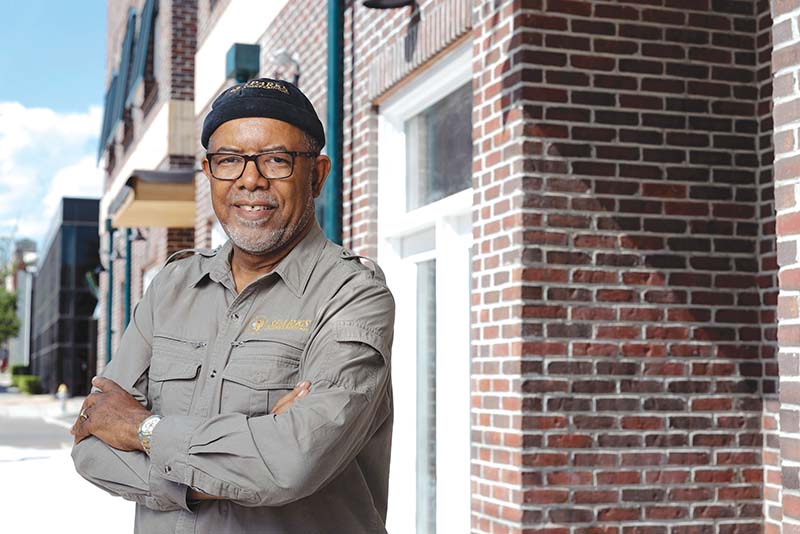 Ronald Sparks of Ronald Sparks Engineering, a Wilmington native, used his engineering skills on the mixeduse building at 200 Market St. shown above in downtown Wilmington. (Photo by Michael Cline Spencer)
On a day in Wilmington about four decades ago, elementary school student Ron Sparks asked a pharmacist a question, then watched as the blood drained from the man’s face.

“A look of complete and total horror came across it,” Sparks said.

The then-9-year-old Sparks – now an engineer and owner of Sparks Engineering – wanted to know whether that particular Port City drug store had any nitric acid in stock. It was an ingredient he needed in his quest to make nitroglycerin, a substance he’d read about at the library.

After all, Sparks had already made gunpowder from a chemistry set he assembled himself.

“One of the neighbors [near his grandmother’s house] smoked cigars, and every morning he would throw out the glass humidor that the cigars came in out of his car window before he went off to work,” Sparks said. “I would extend my walk to school [Ephesus Junior Academy] … and I picked them up. I had a full set of test tubes from doing that.”

He would read cleaning product boxes in the kitchen to find experiment ideas.

“I would see what they said not to mix together … That was my fun thing to do, was to sit there mixing stuff” in the backyard laboratory.

But he never got to make the nitroglycerin, which was a good thing, Sparks said, because nitroglycerin in its pure form is a contact explosive. The pharmacist seemed to know that. “He freaked out; I took off running,” Sparks said.

He was raised by his grandmother, Fannie Bull Sparks, a domestic worker who wouldn’t have been able to afford to send him to an out-of-town college that had an engineering program. Sparks decided to attend the University of North Carolina Wilmington, graduating in 1979 with a major in physics and minors in math and chemistry.

Sparks has held many positions in his life, including as a computer science instructor at Brunswick Community College for 20 years and as facility planner for New Hanover County Schools from 1998 to 2002. But Sparks has the most experience – more than 40 years – in engineering design spanning multiple disciplines, including structural, mechanical, electrical, plumbing, historic preservation and civil engineering.

His first engineering job was with Talbot, Cox & Associates, a firm that is no longer in existence but from which many other companies sprouted, Sparks said, including his own. Sparks formed Sparks Engineering in 2002.

At the time he was becoming an engineer, if you didn’t get an engineering degree, you had to work for four years under a licensed engineer before taking a state test, Sparks explained.

“The advantage to me and my world, because I had to wait so long to take different tests and then with job changes and such, is that I’ve worked in all of the primary disciplines,” he said.

Sparks has done residential projects but mainly works on commercial new construction and renovations, with one of his most recent projects nearing completion at 200 Market St. It’s a mixed-use building under development by John Sutton with the assistance of Gene Merritt.

Merritt has worked with Sparks before, including on Governors Landing, a gated townhome community on Nun Street along the Cape Fear River in downtown Wilmington.

“I have known Ron Sparks for a number of years,” Merritt said, “and find him to be a gentleman and person of good character. I have used his professional services on various projects over the years and was satisfied with the quality of his work.”

Sparks has also worked on more than 40 houses of worship of various denominations locally and in communities around the state, recently doing the engineering on a new mosque in Wilmington.

After his first church project in 1998, “I was getting calls from all up and down the East Coast.” It was his work on houses of worship that led to Sparks, who was already licensed in North Carolina, becoming licensed to do engineering in the states of Georgia and Alabama.

Sparks became a member of the Wilmington City Council in 2007.

“I got mad,” he stated simply when asked why he decided to run for office.

The big drama that year in the election, Sparks said, was the Wilmington Convention Center, which had not yet been built and which many candidates were speaking out against. But not Sparks. He had another concern: the pending formation of Cape Fear Public Utility Authority by the city of Wilmington and New Hanover County.

At a candidate’s forum, Sparks said he asked, “Why are y’all fartin’ around looking at this convention center when the city’s giving away $2 billion worth of infrastructure and no one’s saying a word about it?”

He said that comment helped launch him from a relatively unknown resident to someone who was invited to every conservative talk show in the city. Sparks won a seat on the council in a runoff, continuing to share his concerns about CFPUA by serving as the city council’s representative on the utility authority’s board from 2008 to 2012.

These days, he’s still involved in city government to a certain extent.

Sparks, who had worked as an engineer for the city of Wilmington from 1983 to 1998, is chairman of the city’s Board of Adjustment.

He’s also an inventor, working for the past several years on patenting a two-wheel-drive bicycle. And while his early experiments worked out in the end, Sparks cautions, “As a child, you shouldn’t teach yourself chemistry as I was endeavoring to do.”