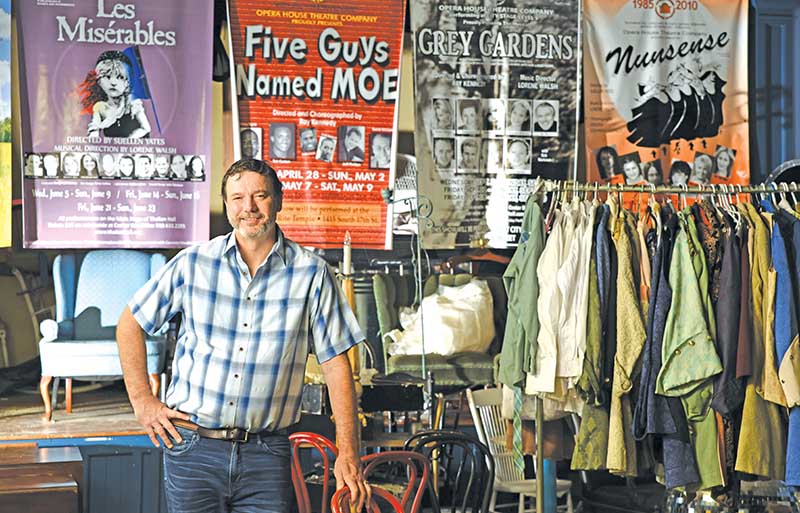 Justin Smith, Opera House Theatre Company’s new executive artistic director, credits the organization’s many creative partners and rich legacy for helping him put the company on sounder financial footing. Photo by Michael Cline Spencer
Justin Smith, executive artistic director of Opera House Theatre Company for the past nine months, is using both his right brain and left brain to put the company on a steadier footing. He took over direction of OHTC last August at the invitation of Alice Sherwood, the former AD, who remains as company manager.

Smith’s arrival followed a difficult four years for the company, with Sherwood juggling several management roles following the death of her stepfather, Lou Criscuolo, in late 2014. The company was founded in 1985 by Criscuolo and was joined in nurturing it by his then-wife Mary James, who died in 2000.

“It was always my dream,” Smith said of the opportunity to lead OHTC. “Everything Lou, Mary James and Alice did made it more attractive.”

Reflecting on the recent past, however, he said, “It’s impossible for one person to do everything. It’s exciting, being able to step in and help save an institution.”

Smith is an experienced actor and director, having played a wide variety of stage roles and having led his own company, City Stage, for a number of years. But he’s also a businessman, part of a group that owns Anne Bonny’s Bar and Grill, Husk, Yosake and Dram + Morsel in downtown Wilmington. And that is a winning combination of experience and skills, according to Jeanne Criscuolo, Lou’s widow, who serves as the company’s director of hospitality.

“He has great ideas for advertising and fundraising,” she said. “He knew, in order to be successful, we needed more income, other funds. You can’t do it on revenue from ticket sales alone.”

Smith says that his recipe for a successful restaurant is “good service, good food, good will.” Translated for a theater company, that’s “good shows, good experience, good will.”

Those elements were largely present when Smith stepped in as executive artistic director, but OHTC was struggling financially and needed to expand its donor base.

To attract subscribers as well as donors, it’s a matter of building trust with the public and making sure the product is high quality, Smith said.

“You have to spend money to get money. We will spend money on things people don’t even notice, like good-quality lighting and sound as well as sets and actors. We had 10,000 people come to our first two shows this year, Mama Mia and Always … Patsy Cline.”

Some of those audience members were first-timers; Smith hopes their exposure to what OHTC offers will bring them back for more.

While Smith has brought ideas, energy and charisma to OHTC, Jeanne Criscuolo said, the company provided some opportunities for him that he did not have with City Stage.

“Opera House Theatre Company is a 501(c)(3), which City Stage was not,” she explained. “We have subscribers, which they did not. And we had a summer season set. So we had advantages he had always wanted in a theater company.”

Smith’s 15 years with City Stage taught him many valuable lessons, however, which he has brought to his new role.

“First, I learned Wilmington and local tastes, and watched them evolve, knowing what would sell,” he said.

“City Stage gave me a formula: how much to budget for each show and how much we would have to make on tickets to break even. I got a great feel; I could estimate about how much a show would make or lose even before it opened.

“I learned how to put together a season, so I could scratch my artistic needs but also bring back sure winners to pay for ‘new classics.’”

For an artistic director, selecting shows continues to be “the most important piece of the puzzle,” Smith said.

But outreach to new audiences and potential donors just might be a close second.

To give area residents a peek behind the curtain, Smith has organized a series of season preview events. Two took place recently in Brunswick County.

Smith realizes that donors come in all shapes and sizes.

“We have multiple levels of donors, individuals and businesses,” he said. “We started a grassroots campaign [for donations of] up to $99 in addition to the ticket price.”

OHTC has also expanded its board, and members are actively involved in development efforts, according to Smith.

And then there are new programs for young people, to expose them to theater and build talent among the next generation.

“We are implementing a program for children and youth, ages 9 to 13, that will take place for two weeks this summer at the Wilson Center,” he said. “We’re also starting an apprentice program for ages 14 to 24 with more education. We’re essentially establishing a farm system. In the apprentice program we will give [participants] opportunities to do three studio-sized shows – two at the Wilson Center and one at the Leland Cultural Arts Center. They will actually put together the show – acting, directing, designing – and they will learn how to audition. Very few large-scale theater companies survive without a farm system.”

Asked how he keeps all the plates spinning, between his restaurants and OHTC, Smith replies that he builds “amazing teams.”

“I recognize like-minded folks and surround myself with them,” he said. “I have unbelievable partners.”

“Justin gathers people around him who have energy, intelligence and experience,” Jeanne Criscuolo said. “And he listens to people and takes their ideas into consideration.”