Impacting Sports Safety On The Field 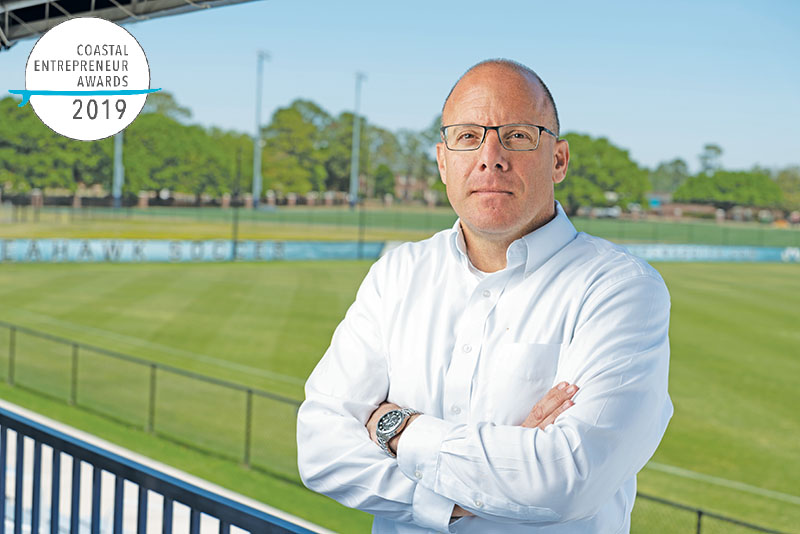 Technology CATEGORY WINNER | SPORTGAIT CHRIS NEWTON, CEO & president | YEAR FOUNDED: 2017 | EMPLOYEES: 6 | Photo by Michael Cline Spencer
With more research and knowledge about concussions surfacing in the past few years, parents, coaches and athletes have become increasingly aware about the dangers they can pose for those who have suffered from them.

Wilmington-based startup Sport- Gait Inc. has tapped into that market by creating a platform for monitoring and managing concussion symptoms.

The startup is housed at the University of North Carolina Wilmington’s Center for Innovation and Entrepreneurship and is a subsidiary of LifeGait Inc., a company that provides health and safety-related products.

SportGait developed technology and an app to help s monitor concussion signs and symptoms in athletes.

What motivated Chris Newton, CEO and president of SportGait, to start the company was his experience with sports growing up and now having two kids involved in athletics.

“Even in contact sports like soccer and football, most children will never get an acute concussion. However, every child playing sports, or not, will suffer head injuries from skateboarding at the park, bicycling and, yes, in contact sports,” Newtown said. “Head-to-head, head-to-ground, head-to-equipment contact occurs with great frequency, and it is theorized that these sub-concussive hits can change neurological behavior over time.”

The startup has received investment from Seahawk Innovation, an organization that provides funding and consulting to local startups that has a public-private partnership with UNCW, making the university a part owner of SportGait.

The growth of the company can be seen in its past fundraising. In January, SportGait raised $430,000, bring the company’s funding total to $1.47 million, according to filings with the Securities and Exchange Commission.

This year is a sales expansion year for the startup, Newton said.

“So far in Q1, our installed base of systems has more than doubled,” he said. “Also, a major health care and hospital system [which Newton declined to name] chose the SportGait brain physical system over all other competitors. This hospital system has more than 2,000 outpatient locations in the U.S. and will be a major focus of our business development efforts.”

The system supports doctors in their clinical decisions regarding treatment during post-concussive recovery, he said.

The company has been focusing on youth athletic clubs as a target market for the app.

“We believe that through the use of its patented technology, the Sport- Gait system will become even more accurate and accessible than it is today, ultimately becoming embeddable in mobile devices for rapid screening in the medical clinic and someday even in people’s own homes,” Newton said.