Below The Surface On Area’s Dive Industry 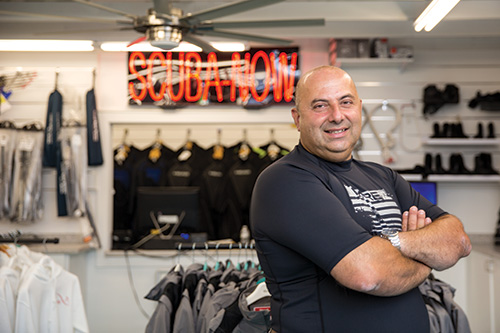 As his passion for diving overtook him, the former Duke University IT worker returned to Wilmington, putting him closer to both family and the ocean while he continued to grow Computersoft LLC, a startup that he had begun in the Triangle focused on automated employment and income verification.

But the diving bug – and a desire to own his own dive shop – fought for his attention and eventually led him to found Scuba Now, which opened its doors in 2009.

“This is my love; this is my passion,” the energetic entrepreneur said as he sat in the classroom of his six-month-old facility where budding divers learn how to be safe as well as technically proficient.

That same passion fuels an estimated 3.1 million people in the U.S. who are active scuba divers, according to the Sports & Fitness Industry Association.

The area might be able to draw more of them to the region’s waters by capitalizing on history that rests below the surface.

With the opening in June of North Carolina’s first Heritage Dive Site off the Fort Fisher State Historic Site, officials hope that access to a sunken blockade runner, the Condor, will attract both local and visiting divers, spurring additional tourism and interest in historic preservation.

Resting just offshore under 25 feet of water, the Condor is marked by mooring buoys and a guideline that runs up and down the vessel. Divers are provided with a slate of information that matches numbered placards on the side of the wreck, said Greg Stratton, a state archaeological dive supervisor.

While about 5,000 shipwrecks have been documented off the North Carolina coast, only about 20 percent of them have been found, Stratton said, adding that the state plans on establishing at least 10 heritage dive sites over the next 10 years.

The next likely site for designation, also off Kure Beach, holds the remains of the U.S.S. Peterhoff, a British ship captured by the U.S. Navy.

Nasseri believes that, once designated, sites farther offshore will prove even more interesting to divers. Much closer to shore, he said, “Visibility’s going to be bad. … You have to go past 20 [miles] to get good visibility.”

One such site, Nasseri said, is the Hyde shipwreck about 20 miles out, teeming with fish and sand tiger sharks.

For the Wilmington-area dive shops that run scuba diving charters, trips range from a sunken liberty ship that serves as an artificial reef and other vessel wrecks to underwater ledges laden with marine life and fossils.

When Nasseri opened his larger space in January, it became a major player in the dive shop business.

With a total of $4.5 million in company assets including buildings, vessels, two lakes and a pool, Nasseri said, “Real estate-wise, I cannot imagine anybody being larger than us.”

“Everything is paid for, there is no loan,” he added, believing that being debt-free allows him to stay ahead of the competition.

Nasseri’s sale of his software firm to Equifax last year meant that he would have additional time and capital to devote to Scuba Now. With his new shop in full swing, he hopes to wrap up some transitional consulting work for the data and analytics company in August.

While the shop is filled with wetsuits, air tanks and the other equipment that divers need, it also sells some high-tech toys including Seabobs, all-electric scooters that operate both on and under the water’s surface, and British hovercrafts capable of reaching 45 miles per hour.

But safety, Nasseri emphasizes, remains the primary focus of his business.

The National Association of Underwater Instructors has recognized Scuba Now as one of the top three dive shops in the world for safety, and that, Nasseri said, is no accident.

Initial certification begins with online training and classroom instruction. Trainees then move to a private 2,000-square-foot pool that Nasseri built on a nearby residential lot rezoned to commercial, and then to a springfed lake with 20 feet of visibility that Nasseri owns in Shallotte where newbies master their skills. A second lake in Burgaw is used for “black water” (nighttime) diving.

Once certified, clients get to go ocean diving.

“I’ve certified thousands and thousands of people, and we’ve had not one accident,” Nasseri said.

One reason for his unblemished record may be how Nasseri selects staff.
The 51-year-old, who weighs 275 pounds and has taken part in a Half Ironman competition, paces his diving instructors to help build their endurance.

“If I catch up with you, you just lost your job,” he said he warns them. “I don’t care how much I like you, you’re not going to put the person’s life at risk.”

While Scuba Now’s safety record remains spotless, Nasseri recently decided to go beyond the use of instructors and Seabobs in his quest to keep customers out of harm’s way.

“We are implementing air drones for search and rescue,” he said. “By the time the summer ends, every boat will have an air drone” capable of operating for up to 40 minutes at 30 miles per hour.

While Scuba Now is considered one of the biggest and most safety conscious dive shops in the country, another wave of expansion is in the offing.

Nasseri plans to construct a two-story annex behind his main building for extra administrative and training space, and he’s pondering a move into franchising, though he offers no details or timetable.

On June 30, a tractor-trailer towed one of Nasseri’s dive boats out of town and down to Atlanta for use in Rampage, the new Dwayne “The Rock” Johnson movie. Two other productions have approached him with similar offers.

Nasseri, who is Persian-American, traces his fixation on achievement to having to fend for himself in the absence of his father, a top aide to the former Shah of Iran who sent his family to the U.S. on the cusp of that country’s revolution nearly 40 years ago.

“For a long time I thought he was dead,” Nasseri recalled. “I grew from 12 to adult really quick.”

Happily, his father, who had been blindfolded and placed before several firing squads but then spared, escaped his captors and was reunited with his family stateside, making his own go of business at Wilmington’s Gallery of Oriental Rugs.

“When they say ‘American Dream,’ it’s real,” the younger Nasseri said. “The harder the work, the luckier you get.

“I lost my country, but I found a better one.”