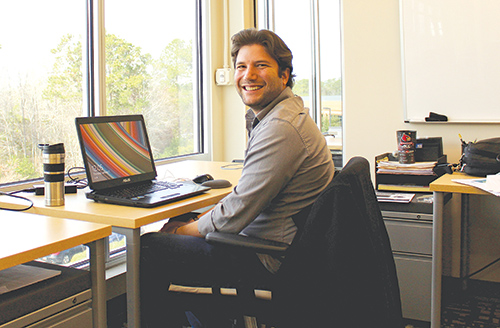 Ed Hall is the founder of Wilmington-based Petrics, a startup company which uses technology to help pet owners keep track of their animals’ eating patterns and health care. (Photo by Vince Winkel)
There is no magic bullet.

Don’t look for a magic wand.

There is no genie in a bottle.

The world of startups and entrepreneurs requires patience, fortitude and a willingness to look outside the box, the city and the state for eventual success.

Despite Wilmington getting ink and accolades for its entrepreneurial spirit, those with a startup mindset still need a superior A-game and a lot of stamina to get their dreams closer to reality.

“Investors in Wilmington are investing. But, it is becoming more competitive,” said Ed Hall, founder of Petrics, a startup which uses technology to help pet owners keep track of their animals’ eating patterns and health care. “I have heard of numerous raises in Wilmington, us included, however, due to the local push for cities to encourage entrepreneurship and have more incubators and accelerators, it has increased the amount of ideas looking to be funded.

“It becomes a simple economic issue of supply and demand. If the businesses looking to raise funds has a significantly higher growth rate than investors bringing investment capital to our city, then there won’t be enough to go around. It is a zero-sum game.”

That’s why it’s wise for a Wilmington entrepreneur to look beyond the Port City as they start the process of starting up, observers said.

“In general, and not just locally, when entrepreneurs have trouble raising capital it’s because they are doing so before they are ready,” said Adam Shay, who provides accounting and financial systems, procedures and guidance to startups. “They need to have some of their team and advisers in place. They should have financials that are of the quality that sophisticated investors expect them.”

And ideally, some local support.

“They get frustrated in the local investor scene and it also makes it difficult to raise money from outside the region if the locals choose not to invest,” said Jim Roberts, who launched the Network for Entrepreneurs in Wilmington (NEW) and Wilmington Angels for Local Entrepreneurs (WALE), an investor network. “Why should we invest if it wasn’t good enough for the local angels where they are from?” is a rhetorical question he asks.

There have, however, been success stories from the area.

“There is great access to capital in Wilmington for investible startups. Live Oak Bank, nCino, Next Glass, JOMO and others have all seen significant participation from local investors,” said George Taylor of Next Glass.

The Next Glass chairman said he feels confident in the direction the Wilmington area is headed.

“As for ILM becoming a startup hub, it takes time, like 10+ years, but I think we’re doing great. Aside from PPD which I guess was the first great ILM startup, we really haven’t had much activity until the past few years,” Taylor said. “But in the past few years, we’ve seen Live Oak Bank launch and exit with an IPO; nCino launch, build great value, and grow to hundreds of employees; and Next Glass launch, repurpose an old downtown building, and grow to over 60 employees.”

The process for a business idea becoming something approaching a reality can be lengthy.

“Raising venture capital is a constant ongoing process of building and maintaining relationships with interested financial and strategic funding sources,” said Norvell Miller at Lapetus Solutions, which was founded in Wilmington in 2014. The company uses science and technology to increase the accuracy of life events predictions.

“It depends on what type of company, which industry and what type of capital,” Miller said in discussing local capital. “For instance real estate, restaurant and even marine science entrepreneurs seem to be able to locate local angel money, while larger, high-risk, venture capital is not locally available. Financial capital is the easiest startup requirement to transport. Human capital and intellectual property require infrastructure in place, to attract or develop.”

But there remain other alternatives to funding, beyond the venture capital chase.

“It is great that business owners want to look locally for capital, but I think most people overlook many of the other options that can be found right here,” said Jenni Harris, manager of the Southeast Region for the Economic Development Partnership of North Carolina.

Harris said that local, state and federal governments all have resources available, as do professional and trade associations and nonprofit foundations, in various programs, specific to startups, small business and women- and minority-owned business.

“There is money designated for these programs, you just have to know where it is and ask for it,” she added.

But regardless of the course, be ready to play the waiting game.

“I will say that I don’t think it’s a matter of not having willing investors in North Carolina and Wilmington,” Hall of Petrics said, “but part of the problem I have observed, as well as many fellow entrepreneurs that have raised in North Carolina, is the time it takes to close a deal. “I have heard it taking up to six months for an investor to choose to invest $50,000-$100,000,” he said. “Time to market is so important.”