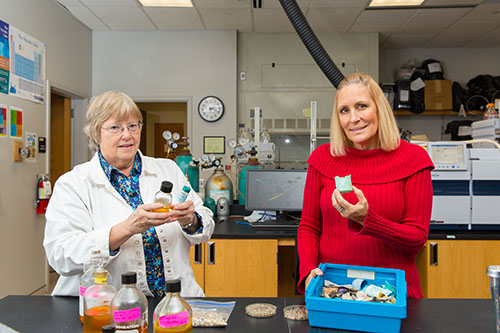 Pam Seaton (left) and Bonnie Monteleone are part of a UNCW team looking at products from ocean plastic. (Photo by Chris Brehmer)
With over 8 million tons of plastic entering the world’s oceans each year, someone needs an incentive to stem the destructive tide. Several companies have begun converting plastic from landfills to produce oil. But would plastic retrieved from the sea also work?

“We didn’t want to create another problem by using ocean plastic. Many chemicals are in the ambient seawater like PCBs and PBDEs that may be absorbed into the plastic. We also wanted solutions that are great for business, including creating jobs,” said Bonnie Monteleone, founder of the nonprofit Plastic Ocean Project and administrator at University of North Carolina Wilmington’s chemistry department.

“We really liked PK Clean because they are using the methane that comes off the plastic as an energy source,” Monteleone said. “They have the best systems for keeping the emissions from being released, using non-recyclable plastic.”

PK Clean’s claim that its process has zero emissions is also being analyzed by Monteleone’s team.

The process for converting plastic to oil is called catalytic depolymerization. It’s fairly straightforward: Grind the plastic and heat to 900 degrees in an oxygen-free depolymizer reactor for about an hour. The vaporized gases are then cooled and condensed into oil or other products.

But implementing a commercially viable method has proven extremely difficult due to the energy required and the volatility of oil prices.

PK Clean has shown it can work, according to an MIT news release. By using the methane to power its reactor or depolymizer unit, PK Clean processes 20,000 pounds of non-recycled plastic, numbers 3-7, to produce 60 barrels of oil per day.

Created at a cost of $30 a barrel, the oil is sold to a refinery located next door. It’s a money maker even with today’s depressed crude oil prices of $40 to $50 a barrel.

To get started UNCW sent PK Clean beach plastics collected from Wrightsville Beach and ocean plastics found 30 miles off North Carolina’s coast. Slightly more than 80 percent of the plastic was converted into oil and sent back to UNCW for chemical analysis.

The good news, according to Seaton, is that some contaminate problems can be solved through refining. Seaton also likes the business aspect of their approach.

“We are focusing on non-recyclable plastics and don’t compete with the recyclable industry – we work together. We divert the non-recyclables from the dump,” she said.

The team focuses on plastic categories numbers 2, 4, 5, 6 and 7. It avoids polyethylene (number 1), the most profitable and most easily recycled plastic that is used to make water bottles and detergent containers. Polyvinyl chloride (PVC), number 3, is also not used due to its toxic chlorine content.

“Several studies already show ocean plastics absorb manmade organic compounds. What happens when they get converted to oil is completely unknown – and that’s what we’re looking at,” said Ralph Mead, another UNCW chemistry professor working on the project. “Many, many questions remain to be answered.”

What plastics make the best fuel according to the UNCW team? When compared to landfill or beach plastics, ocean plastics appear to be the winner, generating the cleanest oil.

Aside from oil, paraffin was found to be an excellent byproduct.

Joel Mauldin, a UNCW economics major, found that paraffin offered a more stable market with profitability dependent on the grade of paraffin. Mauldin concluded that paraffin is a better option than oil when crude oil prices are depressed.

The sweet spot for recycling plastic to oil appears to be plastic numbers 4 and 5.

“The low economic value of the 4s and 5s ultimately lands them in the landfill and the ocean. These are our best options,” Bledsoe said.

“We’re most impressed with the quality of oil and the high yield produced. Roughly 80 percent of the plastic turns into oil, with 12-15 percent as methane gas and up to 5 percent as residue,” she said.

Monteleone’s encouragement was tempered by the scope of the problem. On a sampling mission to the Sargasso Sea, she found that an estimated 3,440 metric tons of small plastic particulates covered the surface of the sea.

“And this did not include the large items that we found floating there,” she said.

The Sargasso Sea, located in the North Atlantic, is about the size of the continental U.S.

“They use the same materials as peanut packing – they are dissolvable – carbohydrate based,” Seton said.

These materials, unfortunately, require sunlight and oxygen that is only available in rare industrial compost facilities.

A closed-loop system is Monteleone’s dream.

In the near term, the UNCW researchers are looking to use solar energy to power their table top reactor.

“We will be fundraising for a solar panel to purchase from Coyle LLC-a Wilmington solar panel manufacturer. We hope to have it by mid- to-late spring,” Monteleone said.

She would like eventually to purchase a small reactor for a place like Haiti that has virtually no waste management. A 10-ton reactor would cost about $3 million. Funding for the project would come from private donations and the Plastic Ocean Project.

To increase awareness, Monteleone said she is planning a different type of fishing tournament. The winner will be determined by who catches the most amount of trash.