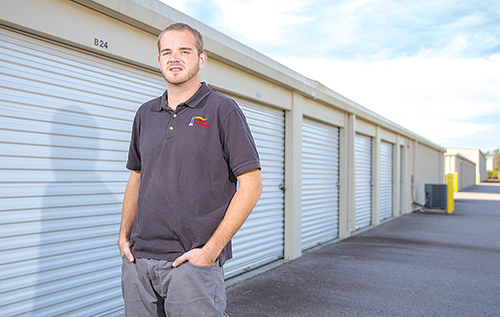 Brian Swan, manager of Coastal Mini Storage in Hampstead, says self-storage use is increasing as customers look for more units to house their extra stuff. (Photo by Chris Brehmer)
The late George Carlin might well have predicted the rise of the self-storage industry in his tongue-in-cheek musings about “stuff.” “Everybody’s gotta have a little place for their stuff. That’s all life is about. Trying to find a place for your stuff,” the comedian famously said.

Americans’ appetite for off-site storage of their goods continues to increase, and residents of the Cape Fear area are no exception.

“Self-storage is crazy growing,” said Brian Swan, manager of Coastal Mini Storage in Hampstead. “I pass three new facilities going up, just on my way to work every day.”

Swan said his 500-unit facility, located on U.S. 17, sees use from people with second homes at the beach as well as from year-round residents. While national statistics indicate that self-storage occupancy is higher in the first two quarters of the year, slowing slightly over the third and fourth quarters,
Swan reports a slower January and February, with higher occupancy of his units starting at the end of February and continuing into the early fall.

The market for climate-controlled units is “crazy busy,” not surprising in a humid coastal climate, Swan said. He is in the process of installing HVAC in more of his existing units.

Coastal Mini Storage in Hampstead also offers another popular service: boat and RV storage. Swan believes his is the currently the only such facility in Hampstead, although he has learned another one is under construction nearby.

That’s good, he says, because he can’t keep up with demand for space in his three-walled, covered garage space.

Nationally, self-storage inventory has grown slowly over the past few years, according to a study published in July by National Real Estate Investor, which saw rents climb due to healthy demand and a fairly steady supply.

“The good news is that developers have been slow to ‘grow’ self-storage space: inventory growth had been below 1.0 percent per year from 2012 through 2015 while occupancy growth stayed well above 2.0 percent for those years,” NREI reported. “Although occupancy growth has been steady, inventory growth is expected to increase by 1.7 percent in 2016.”

Growth locally reﬂects the realities of housing stock in Wilmington and the surrounding beach communities: Few homes have attics, and fewer still have basements. As the real estate market has recovered, the area is home to more single-family and apartment communities. People moving here may need to store household goods while they look for a permanent home.

“It’s the number of people that always drives everything,” said Archie McGirt, owner of Monkey Junction Self Storage, which has four facilities in the Wilmington market. “The building boom has created the need for extra storage, and apartment complexes limit people’s storage.”

In its July report, NREI noted another trend: As the economy has improved, “consumers likely spent more on acquisitions without the means to store them.”

Swan said he had a recent request from a man who wanted to rent a small unit to store the Christmas presents he was buying. The manager said he could offer a pro-rated rent for just the time he would need in December.

“But he said no – he wanted it for gifts for next Christmas – a whole year ahead,” Swan said.

Self storage isn’t just for household goods or large vehicles. McGirt pointed out a rental unit can be an inexpensive place for a startup business to store inventory or supplies. Some people even use climate-controlled units to store wine or other temperature-sensitive commodities.

A quick visual survey of self-storage facilities in Wilmington shows evidence that today’s properties are not yesterday’s standard.

“Self-storage construction has become more sophisticated over the past decade due to heightened consumer expectations as well as more rigid approval processes through municipal planning and zoning boards,” stated a recent piece from industry publication Inside Self-Storage.

“Where self-storage was restricted to industrial zones in the past, it now often enjoys prime locations in commercial and even residential areas. Suppliers provide roofs, corridors, roll-up doors, mezzanines, lifts, elevators, relocatable buildings, and more,” the article continued.

When he built his first facility in 1991, on 15th Street in Wilmington, the design was the typical asphalt lot with a cyclone fence enclosing rows of metal garages.

As he has revamped his original location as well as his seven other locations in southeastern North Carolina, he has converted increasing numbers of units to climate-controlled units and has improved aesthetics around the buildings.

The company now sells moving and packing supplies and partners with U-Haul to rent trucks and offers insurance on the goods stored in his facilities.

“We are building a new facility on Gordon Road within the next year,” High said. “Eighty percent of the units will be climate controlled, and there will be boat and RV storage. We’ll also have a retail strip center there for other businesses.”

The owner of Coastal Mini Storage also is involved in designing self-storage facilities for other companies in North Carolina metro areas.

“More and more of them are multi-story, due to land costs,” he said. “They can be between two and five stories. [Each one has] two elevators and two sets of stairs.”

The company’s properties also offer boat and RV storage and sell moving and packing supplies, and can provide a truck for customers’ use.

Those heightened customer expectations mentioned by Inside Self-Storage have driven a more subtle shift in the industry. Not only have self-storage facilities expanded the scope of their products, but the most successful companies have also emphasized service.

“A lot of credit goes to our people. Getting the best people is a must for any business,” McGirt said, explaining that Monkey Junction’s staff do more than just answer the phone, rent units and collect payments. They have become problem solvers for customers and must ensure the facility is kept in good shape. “This is not an easy business to run. There’s a ton of work the general public doesn’t see: maintenance, security, daily janitorial work.”

High has also seen the shift as the self-storage industry changes from primarily a product perspective to a service perspective.

“It’s a retail business,” he said. “We’re open seven days a week, and we strive to serve customers at times they need it. Managers really have to give you customer service. We have one opportunity to impress the customer.”