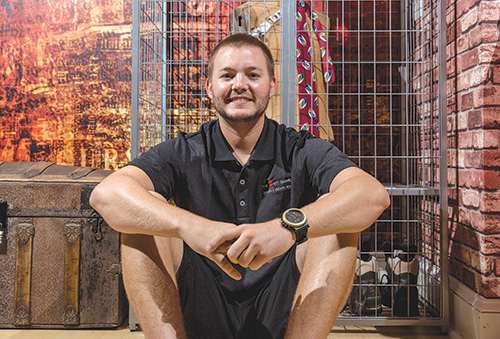 Josh Skidmore (above) became the latest area entrepreneur to enter the escape room fad when he opened The Exit Games. (Photo by Chris Brehmer)

Kim Wilt and her family love escape rooms. They love being thrown into these living board games, finding clues and solving puzzles. Even if they rarely succeed.

But she loved them so much she wanted to open one. Last October, Cape Fear Escape Room opened on Oleander Drive.

The following months brought more rooms – The Breakout Room on Front Street, Port City Escape on South 16th Street. Wilt opened a second location of Cape Fear Escape Room on Chestnut Street. And as of Aug. 25, The Exit Games became the latest to enter the fray.

The rooms cater to those looking to spend a fun hour in their very own mystery story. But they’ve also become a valuable way for other local businesses to evaluate and improve their employees’ teamwork and communication skills.

He cites a regular turnover of students, tourists and businesses in the area, and the constant need for corporate team-building.

“People will always look for a fun place to host a birthday party, and couples will always be searching for your not-so-average date night,” he said via email.

Skidmore, a recent graduate of the Cameron School of Business at the University of North Carolina Wilmington, co-owns The Exit Games with his father.

After his girlfriend got them tickets to an escape room while visiting Boston, Skidmore got hooked.

“We instantly fell in love with the concept,” he said. Since then, he visited rooms around the country and even abroad in Prague, Czech Republic.

“Escape rooms became my favorite hobby. As I sat on the couch with my dad one night, discussing the form of entertainment, I just looked at him and said, ‘I know what I want to do after I graduate.’”

The Exit Games opened with one room – The Basement, in which teams must try to free a serial killer’s victim before it’s too late. A second room, in which guests must pull off a casino heist, is planned for an October opening.

Designing an engaging atmosphere and unique puzzles is the key to any escape room’s success. Puzzles need to be challenging, but not impossible. And local owners have reached far and wide for assistance creating rooms that feel immersive and authentic.

Skidmore collaborated with a Canada-based designer to create The Basement, which includes a 97-year-old trunk found in the Skidmore house.

Wilt reached all the way to Hungary for the designer of her three rooms – Time Traveler, Cape Fear Manhunt and Port City Speakeasy.

“He is very thoughtful in his clues,” she said about the designer. “His games were just really cerebral, and that’s what really appealed to us.”

At Port City Escape, owners Kris and Doug Testori decided to create everything themselves. Kris Testori said her husband, who’s an oncologist by day, is naturally curious and loved tinkering with the room challenges.

“He just started trying to build them,” she said. “You should see my kitchen. There’s flowcharts on the wall.”

Even the Testori kids, ages 10 and 13, pitched in to bring them to life.

“We did everything ourselves. We wanted it to be really immersive. It looks like you’re really in a pirate ship,” Kris Testori said.

Most escape rooms have a solve rate of about 25-35 percent, so newbies shouldn’t be too distraught if they aren’t successful the first time out. The fun is in the attempt, fans say. Most local rooms will walk guests through the final solution so they can see what they missed and learn tips for future attempts.

People usually don’t pay to experience a room again, which is why the sudden explosion of new rooms can help all of them, owners say. Once guests experience one room, they’ll be looking for new ones. And some are willing to travel to find them.

Since its first room opened in June, Port City Escape has attracted crowds of tourists familiar with rooms in their hometowns. Escape rooms have cultivated a passionate online following, and some fans travel across the country trying out as many rooms as they can. Those guests have been key customers to local escape rooms while locals continue to discover the craze.

But like other escape room proprietors in the area, Kris Testori wants to attract more local businesses looking for a fun way to do some team-building and leadership evaluations. She’s even updated the control room where owners watch players’ progress to more easily allow corporate guests to view their teams in action.

Testori and Wilt both shared stories of companies that have used escape rooms to help make promotion and placement decisions by watching how managers interact with their staffs.

“You can definitely see the leaders emerge and the followers emerge,” Wilt said. “We’ve had situations where all the managers will be in one room, and all the employees would be in another room, and neither room does well.”

But she was quick to add that rooms offer opportunities for everyone to shine. Rooms are designed with a variety of puzzle types, so “there’s kind of something for everyone,” she said. “Though [someone] may not have a big role in the company, they feel like they can accomplish something in our room” and play a key role in the solution.

Wilt said she will continue to look for ways to expand their offerings for corporate clients while also expanding how they serve everyday gumshoes.

“We’ve just been exploring some ways we can grow online and with mobile to continue to tap into those brain games I think people really like,” she said.

The rapid growth and evolution of the rooms in Wilmington points to the need for this kind of outlet for the board game players and puzzle lovers who want to channel their inner Sherlock Holmes in new ways.

“I just think people are looking for something outside of athletics,” Wilt said, “something that celebrates the nerd in all of us, that pushes us to think and look at the world a little differently.”