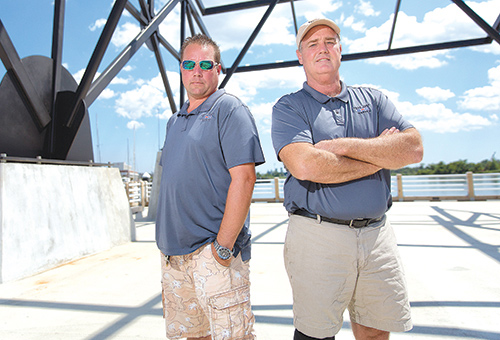 When Capt. Ross DeMay comes ashore, he walks into a construction zone. The path leading into the recently opened Port City Marina isn’t fully paved, crews slowly fill in the shells of two structures with glass and metal while cleared land hints at more building to come.

But DeMay doesn’t mind. For him, the recent and future additions to Wilmington’s northern riverfront area, including a concert stage, a pair of new restaurants and retail space, will just make a great experience even better.

DeMay captains the Prestige Lady, a 110-foot Westship yacht that has been docked at Port City Marina for about a month. He and his wife live aboard, and he said they love the amenities and location, where the floating docks first opened late last year.

“We walk the Riverwalk almost every night,” he said, adding that downtown’s proximity is definitely a draw. Some marinas he’s stayed at in his nearly two decades on the water require a car to get to most restaurants and stores. Port City Marina offers both proximity to such businesses and privacy, thanks to its spot north of the Wilmington Convention Center, several blocks away from the bustle of Water Street.

“The crews love Wilmington,” he said.

With more than 80 dock slips and space for vessels up to 250-feet long, Port City Marina lures clients away from beach towns from North Carolina to Florida.

Wilmington’s city docks have a two-week limit, but many of Port City Marina’s customers are looking for multi-week or even yearlong stays downtown.

And though not every vessel is willing to make the 20-plus mile voyage up the Cape Fear River to dock, captains who do list a few advantages.

The brackish river water can be less damaging to certain hulls than seawater. And docking along the river offers storm protection too.

The Lady’s owner originally wanted to stop in Wilmington because he wanted to return to the German Cafe restaurant he first visited 25 years ago. The eatery in the Cotton Exchange is one of the closest restaurants to the Marina, but a pair of new options will soon open across the street.

The Port City Marina project, overseen by Wilmington-based USA InvestCo, has been gestating for years. Back in 2012, the company announced plans to bring Charlotte-based restaurants BlackFinn Ameripub and Vida Mexican Kitchen y Cantina to sites next to PPD headquarters at the foot of Harnett Street.

Now, those restaurants are nearing completion.

The 8,000-square-foot BlackFinn will serve upscale classic pub fare, from steaks and burgers to salads and fish. Vida Mexican Kitchen y Cantina, at about 6,000 square feet, will offer burritos and tacos alongside tortilla pie and spice-crusted ahi.

Bar Management Group, out of Charlotte, will operate the restaurants.

The goal is to have at least BlackFinn open by Labor Day, in time for the Wilmington Boat Show Sept. 9-11. If Vida is not finished by then, it should be ready soon thereafter, according to spokeswoman Courtney Dooley.

Dooley is the sales and event manager for Pier 33, a sister organization of BMG and Full House Productions.

Dooley is in charge of booking the new Pier 33 space in the middle of Port City Marina. Recently home to the N.C. Azalea Festival queen’s coronation ceremony, the 27,000-square-foot concrete Pier 33 has a metal bandshell on its south side and room for about 4,000 people. That makes it among the largest concert venues in the city.

The bandshell soon will be covered with canvas and outfitted for concert-quality lighting gear, but the venue has already hosted a handful of weddings and private events.

“The bandshell will definitely bring a new life to that side of downtown,” Dooley said, adding that the outdoor venue is much larger than Greenfield Lake’s amphitheater on the other side of Wilmington.

“It gives us an ability to tap concerts and private events that are outside,” Dooley said, with views of the Battleship North Carolina and Cape Fear Memorial Bridge.

The restaurants will provide alcohol for private events at Pier 33, though private caterers may be used for food service.

The concert venue, restaurants and marina are the latest of many new developments coming to the north end of the Riverwalk.

USA Investco still plans to build the Hotel Indigo nearby between Hanover and Brunswick streets. A new city park, North Waterfront Park, is planned a few blocks north. And DeWitt Carolinas plans to construct a mix of apartments and retail space along the riverfront directly behind the marina. Once that project, known as Pier 33 apartments, is completed, it will house Port City Marina’s main office as well some of its guests’ amenities, including showers and a gym.

All involved with these projects say that they will bring new customers to downtown Wilmington and benefit from their proximity to other established businesses.

Werling, Port City Marina’s manager, said the Hotel Indigo and planned convention center hotel will both be draws for his clients.

And it’s not just the people behind the businesses who are excited.

Capt. DeMay has been so impressed with what he’s seen happening downtown that he and his wife are looking at buying a house in the area.

“It’s just relaxing,” DeMay said. “For all we know, it might be our new home port. I have a feeling we’re going to be here for quite a while.”