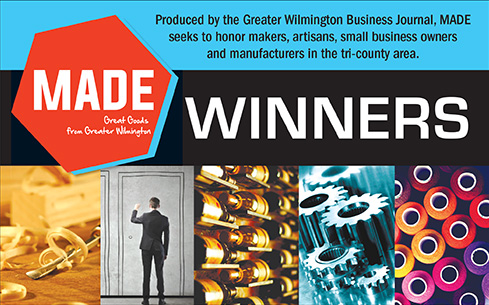 The winners of this year's MADE competition will be showcased at the WilmingtonBiz Conference & Expo on March 30.

Even for those who work every day with the local business community, the fact that certain products are made in the Port City can come as news to them.

That was the case for Doug Tarble, director of the Small Business Center at Cape Fear Community College, as he served as one of the judges for the first “MADE: Great Goods from Greater Wilmington” competition.

“I was surprised to see things for the very first time, that I did not know of, that are made here in Wilmington,” Tarble said.

The main purpose of MADE, presented by the Greater Wilmington Business Journal, was to spotlight makers, manufacturers, artisans, designers and small businesses in New Hanover, Brunswick and Pender counties. Nominations ranging from conceptual and early stage to actual in-market product were welcome to be submitted.

“We wanted to be able to recognize some of the smaller businesses that are extending their reach out of our immediate area, that maybe have gone unnoticed because they are smaller,” said Nina Bays Cournoyer, art director of the Business Journal, who came up with the idea to start the MADE competition.

Bays Cournoyer said the six MADE judges were asked to base their choices for winners on several factors, including which applicants had the most unique products and which products had the most capacity to create new jobs and bring recognition to the area.

She said the judges also looked at which nominated products had the farthest reach.

In the end, the judges chose three top nominees for the Manufacturing, Functional Product, Food/Beverage and Arts categories and one top nominee for the Supporter designation. Those winners are profiled on the following pages.

The winners will each have a table at this year’s annual WilmingtonBiz Conference & Expo, also produced by the Business Journal, on March 30 at the Wilmington Convention Center.

“We felt MADE dovetailed really nicely with the Biz Expo to create a new element to explore,” Bays Cournoyer said.

Tarble said he predicts the publicity generated by their MADE win could help some of the businesses and producers with any expansion efforts, allowing them “to grow not only in Wilmington but throughout the country and increase the employment base … some of them could be destined for some pretty big things.”

Bays Cournoyer said she expects, now that the inaugural winners have been chosen, that the new competition will draw even more nominations next year.

“I hope it will be an ongoing competition,” she said.

To see the winners for the Functional Product Category, click here.

To see the winners for the Food and Beverage Category, click here.

To see the winners for the Arts Category, click here.

To see the winners for the Manufacturing Category, click here.

To see the winners for the Supporter Business Category, click here.

The MADE award’s goal is to recognize products made in southeastern North Carolina.

Any company with an operation in New Hanover, Brunswick or Pender counties was eligible. Their product could be in production or in the prototype stage.

After the nomination period, a panel of outside judges reviewed the submissions and picked the winners.

In picking the winners, judges were asked to weigh whether the nominated businesses had unique offerings in its market; which were likely to grow sales the most, particularly in other parts of the country and/or internationally; and if continued growth would likely result in the creation of more jobs in the region and impact local economic development.

For the Supporter category, judges considered what nominated organization was best equipped to help businesses that make products expand quickly.