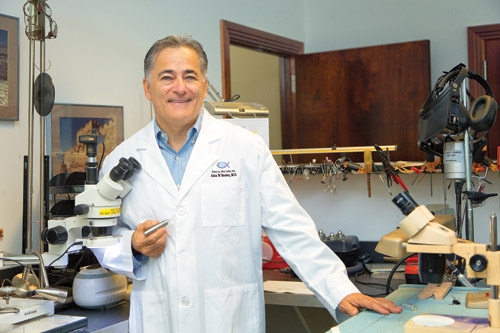 Alan Brown, founder | Year Founded: 2013 | No. of Employees: 7 (Photo by Chris Brehmer)
Alan Brown, an ophthalmologist with 30 years experience, was familiar with the problems eye surgeons faced and knew he could fix them.

“Surgilum seeks to support economic development in [North Carolina] while developing products that will better equip doctors around the world,” Brown said in a statement.

He works with a team with years of experience. He did all of the design but says, “They took those bones and turned it into a real company.”

Their first device was the RoboMarker, which was released in June.

“In November of that year, it was listed at one of the top eight innovations in cataract surgery by the American Society of Cataract and Refractive Surgery (ASCRS) in Boston,” Brown said.

The RoboMarker simplifies the process for marking the cornea for certain surgeries. The ink from markers currently used only last 10-15 minutes and requires a multi-step process. “RoboMarker ink lasts over two hours, improves patient results, can save the surgeon eight minutes per case and saves the surgery  center the money, time and risk associated with autoclaving reusable metal markers.” Brown said.

The company’s second device is the single-use Photon Speculum, which is expected to be released at the end of 2015.

It involves directly focusing light on the retina, which causes glare for the surgeon, corrupting the surgical field. The Photon Speculum will correct this problem. Brown said.

“The Photon Speculum illuminates the eye tangentially, eliminating light toxicity and giving the surgeon a ‘never seen before’ view of the eye that will allow more efficient and precise surgery,” he said in the statement.

Marketing for both devices has been through trade show booths and 40 independent representatives in the U.S. who started around February, according to the company.

Brown said that both of their devices are the first of their kind.

“Our biggest market opportunity comes from our vision of finding big needs and supplying simple solutions,” he said. “We strive to provide ‘first in class’, and ‘never been done before’ innovations that combine new solutions with beautiful design.”

Prior to Surgilum, Brown had seven patents. After founding the company, he now has three more patents pending to his name. The RoboMarker and the Photon Speculum are only the beginning, Brown said.

“Our next products will focus on ophthalmic telemedicine, a new way to cure eye infections and several key innovations for cataract surgery,” he said. “We plan to leverage our success in these areas to fund development of even more significant intellectual properties with a goal to become the local PPD of medical device design and innovation.”