How Martin Became King Of The Castle 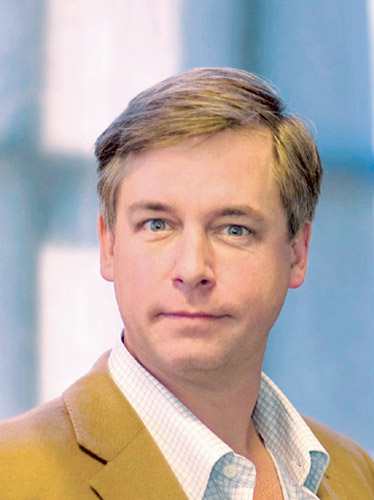 In 2002, Brett Martin and 32 of the company’s 35 employees – some riding in the back of a pickup truck – moved Castle Branch from its original home in Chapel Hill to Wilmington.

On April 15, Martin and a somewhat larger group, including Wilmington’s Mayor Bill Saffo, cut the ribbon on Castle Branch’s new, 36,000-square-foot headquarters on Sir Tyler Drive in Mayfaire. The event was another milestone in the career of the company’s founder, a career that has included acting, political consulting and now running one of the country’s leading data services providers.

Martin grew up in Montreal. He earned a bachelor of arts degree in economics at the University of Western Ontario and then began the unusual career progression that would lead to being the founder and head of his own company. He first worked as a professional stage actor in Canada for six years, after which he came to the United States to continue his education. He went to the University of North Carolina at Chapel Hill and earned a master of fine arts degree in theater. However, he did not return to acting. He says, “As I finished that degree, I realized that I probably wasn’t going to go as far as I wanted to go as an actor. And that’s when I got involved with working with politicians.”

Martin used his training, experience and education in acting to become a voice coach and political manager for politicians, first in the U.S. and later overseas. His clients included the late Jane Mosley, a North Carolina state senator, as well as federal senators that he doesn’t name because, he said, “they don’t like it known that they use voice coaches.” His work for politicians also included the National Democratic Institute (NDI), a group that is active throughout the world in helping support the political structure of young countries. Of the NDI, Martin says, “Their belief is that if there is an independent government, there will be less war. I worked for them in Bosnia, Macedonia and Bulgaria as a speech coach and political manager for politicians there.”

His work as a political manager introduced Martin to the use of private investigators.  “I would hire private investigators to make sure I was being told everything I needed to know,” he says, “And in using that information, I said to myself there must be an application in the business world for this type of information. It would be a great employment screening tool.” Martin realized then that his work as a political consultant was the bridge to creating Castle Branch.

He and a partner formed the company in Chapel Hill in May of 1997.

Martin explains Castle Branch’s various products and services as follows: “Castle Branch provides background checks for the employment screening industry, including criminal records, driving records, credit reports, education history and so on. We take those same services, rewrap them, and provide them to other industries under different names. The information we provide to employers as CastleBranch.com is provided to lawyers under the name CourtSearch.com, to consumers via 123NC.com and the health care
industry via CertifiedBackground.com. Some operating divisions are outside the basic scope of a background check, but for the most part the core is similar products and services that have been rewrapped for specific industries. The bulk of our business comes under those categories, including drug testing, which we also do.”

One of the Castle Branch divisions that is outside the scope of a background check is Route1A.com, a full-service advertising agency based in Erie, Pennsylvania. Why an ad agency? Says Martin, “Years ago, as we were building our brands, we were spending a fortune with our advertising agency. It became wiser to buy the company than to keep paying the bills. They’re an excellent firm that specializes in the health care industry. We’re now just one of their many clients.”

In this time of economic recession, when many companies and industries are experiencing difficulties, Castle Branch is continuing its impressive growth. “We’re working very hard,” says Martin, “and we’re going to grow by double digits this year.  We have found opportunity in this difficult time. While our employment screening business is down because so few companies are hiring, our services to the health care and legal fields have increased. Our new headquarters building has been designed to let us grow from our current staff level of 140 to a projected level of 270.  And we do most of our hiring locally.”

Martin’s business-related activities in Wilmington extend outside of Castle Branch, as well. He is an active member of the Entrepreneurship Advisory Board of the Cameron School of Business at UNCW and points out that it is one of the only business schools in the country that offers entrepreneurship as a major field of study.

Where are Martin and Castle Branch headed next?  “Our plan is to move from the top ten companies in our field to the top five,” he says with a smile.