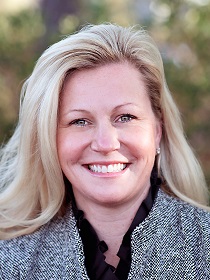 Veronica Godwin
Cape Fear Community College on Thursday announced a new executive director for the college’s foundation.
Veronica Godwin has been selected to lead Cape Fear Community College Foundation Inc., a nonprofit that supports the college and its students, faculty, staff, programs, scholarships and specific capital projects, according to a news release.
Godwin's first day at CFCC was Oct. 8.
The announcement comes more than a year after its previous leader, Marty Richards, took the helm in 2017.

As of press time, CFCC did not address questions about when former executive director Richards left his post or the reason.
Richards was hired last year to fill the role formerly held by Margaret Robison, who resigned from the executive director post in late 2016.

Officials with the college said in the release that Godwin "has a wide range of experience in leadership, major gift fundraising, capital campaigns, donor relations, and event planning.”

Officials with the college did not immediately respond to questions about the foundation's revenue or the salaries of the current and past executive director.

A Wilmington native, Godwin graduated from Hoggard High School and went to the University of North Carolina Wilmington where she earned a bachelor's degree in English literature.

"Cape Fear Community College makes such an important impact in our region," Godwin said in the release. "I'm excited to have the opportunity to help students pursue their educational goals through scholarship funding. I also want to help the college continue to expand its reach with area businesses. CFCC has a major impact on economic development in our region, so it's important to me to help nurture relationships that will be beneficial to both the college and our community partners."