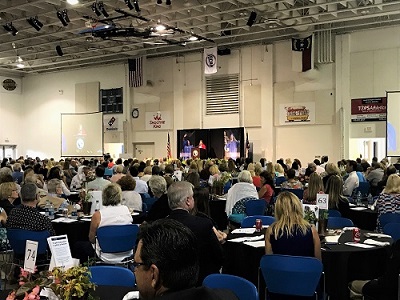 The annual event is a fundraiser to raise scholarship money for CFCC students. The Gift of Education Luncheon is the largest annual fundraising event for the foundation. Each year, hundreds of CFCC students receive scholarships from the CFCC Foundation, according to the college.

The luncheon’s keynote speaker was Michele Holbrook, plant manager at Corning Inc., a 166-year-old company with a facility in Wilmington. Almost 40 years ago, Wilmington became the first manufacturing plant in the world to produce optical fiber, she said.

“The backbone of telecommunications today, fiber is capable of transmitting data and video around the world with nearly limitless capacity. Following the invention … Corning needed somewhere to manufacture the new product, and thankfully for our community Corning selected Wilmington,” she said.

What three scientists learned in college, Holbrook said, enabled them to invent the first optical fiber in the 1970s, that today has influenced many peoples' lives and now employs hundreds of people in Wilmington including more than 40 CFCC graduates.

Three CFCC student speakers also took the stage at the luncheon, including Richard Yakuba, Jenna Zayas and Patrick Wilkerson. Their different stories – overcoming language barriers moving into the country; a childhood filled with parental abuse and neglect; and homelessness – got a standing ovation from the room.

“With hard work an dedication anyone can accomplish anything they set their mind to, and I’m living proof,” Wilkerson said. “None of this would be possible without the help of everyone in this building. This journey would not be possible without … foundation scholarships that allowed me to be able to concentrate on my studies without having to stress about where my next meal would be coming from.”

New to the luncheon this year, the CFCC Foundation awarded a $1,000 scholarship on-site to Hannah Johnston, a dental hygiene student and CFCC ambassador, at the end of the program.

Each year more than 23,000 local residents pursue education at CFCC though curriculum and continuing education courses, according to the college. About $2,000 covers the cost of one semester at the school, including tuition, books, and fees.

The CFCC Foundation exists to support its mission of the college and its students, faculty and staff and programs, as well as scholarships and specific capital projects, according to officials.

The funds raised at the luncheon will not be announced until Thursday, according to the college.