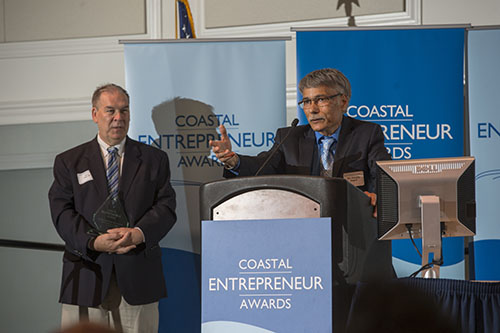 Quality Chemical Laboratories Founder Yousry Sayed, right, accepting a Coastal Entrepreneur Award in 2014. (File photo)
UNCW recently received its largest gift commitment by a corporate donor in the school’s history, $5 million that will be used to support new pharmaceutical sciences and chemistry programs, according to an announcement Monday.

Quality Chemical Laboratories, the company’s founder Yousry Sayed, and his wife, Linda, are the donors of the gift – $1 million a year for five years – to support development of new programs tied to pharmaceutical sciences and chemistry and build on the strengths of chemistry, biochemistry, biology and marine biology at the University of North Carolina Wilmington, a news release stated.

Yousry Sayed, a former UNCW administrator, is a longtime faculty member, student mentor and campus volunteer. Linda Sayed graduated from UNCW in 1978 with a bachelor’s degree in chemistry, and she earned a master’s degree in education in 1985.

Yousry Sayed founded Quality Chemical in 1998 and serves as its president and CEO, while continuing to serve as an adjunct faculty member in the chemistry department.

“With this gift, Dr. and Mrs. Sayed are supporting the development of a critical new academic track, and also the aspirations of current and future Seahawks who are committed to advancing scientific research in our state and around the world,” Sartarelli said in the announcement. “This investment will allow UNCW to continue to grow as an institution and as a driver of economic development in the state, by virtue of the training and employment possibilities these new programs will create for our students.”

Quality Chemical works with the pharmaceutical industry, providing scientific services that supports all phases of drug research, development and commercialization, according to the release. The company recently expanded its footprint with a new 35,000-square-foot building by its existing facilities in the North Chase Industrial Park off Interstate 40, one of the purposes of which was to be able to hire more employees, said Yousry Sayed.

"We're looking at, by the end of the year, adding about 50 employees," Yousry Sayed said, which would bring Quality Chemical's total employee number to 250.

The company hires locally whenever possible and employs many UNCW graduates, he said.

With the donation announced Monday, “my wife, Linda, and I wanted to give something back that could make a difference and continue to make this university the leader that it is, make a small contribution to all the effort that's being made to the programs and a lot of other areas that the university provides," Yousry Sayed said.

During the current academic year, 36 percent of university employees have made philanthropic contributions to UNCW, setting a record for participation, the release added. Those contributions total more than $190,000.