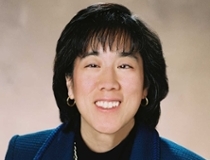 Christine Poon speaks Tuesday as part of the Chancellor's Distinguished Lecture Series at the University of North Carolina Wilmington. (Photo courtesy of UNCW)
A speaker at UNCW on Tuesday will address a phrase she became familiar with while working at Bristol-Myers Squibb, the company where she met the university’s chancellor, Jose Sartarelli.

“As part of the culture of the company, ‘the priceless ingredient’ was the honor and integrity of its people,” said Christine Poon, an executive-in-residence and professor in the Department of Management and Human Resources at the Max M. Fisher College of Business at The Ohio State University.

Poon will speak on the topic of “The Priceless Ingredient" at 4 p.m. Tuesday in the Burney Center at the University of North Carolina Wilmington as part of the Chancellor’s Distinguished Lecture Series.

A Q&A session will follow Poon’s lecture. Admission is free, but registration is requested.

Poon said she remembers being inspired by Bristol-Myers Squibb’s definition of “the priceless ingredient” as a young business leader.

“Even to this day, I think to myself that you can put all kinds of rules and regulations and laws in place, but the most effective thing you can do to protect a company’s reputation is the honor and integrity of the people that work for your company. If they act every day with honor and integrity, your job’s pretty easy,” Poon said.

During her career, Poon has achieved success in the business world and academia. She was dean and the John W. Berry Sr. Chair in Business in the Fisher College at The Ohio State University from 2009 to 2014, and before that spent 30 years in the healthcare industry, according to a UNCW news release.

Poon served as vice chair and worldwide chair of pharmaceuticals at Johnson & Johnson and was a member of the company’s board of directors and executive committee. Before working for Johnson & Johnson, she spent 15 years at Bristol-Myers Squibb.

She continues to do some advising in the healthcare industry and serves on boards of publicly traded firms, including those of Sherwin-Williams Co., Regeneron and Royal Phillips Electronics. Poon was named Woman of the Year by the Healthcare Businesswomen’s Association in 2004 and named Business Leader of the Future by CNBC/The Wall Street Journal in 2005.