Downtown Apartment Units On The Rise 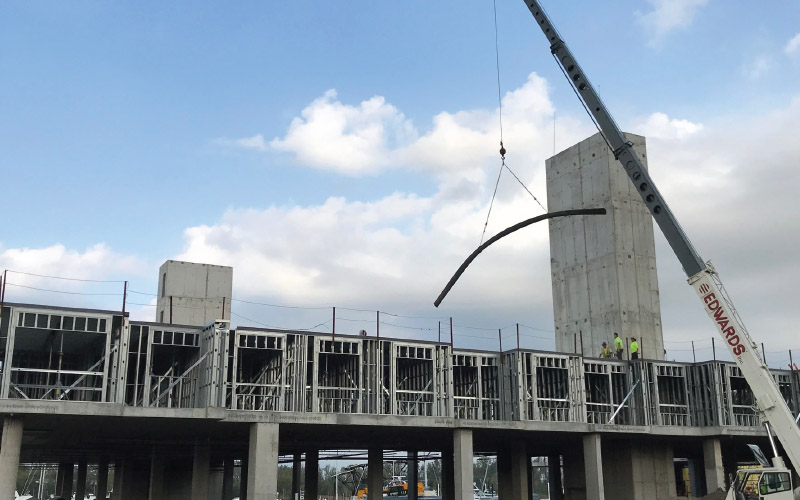 It might sound like a lot, relatively speaking. To put it in perspective, more than 23,000 apartments were under construction or planned in Charlotte earlier this year.

But developers and city officials say the demand exists for the supply that’s coming to the Port City’s popular downtown area.

“So far, the addition of new units has been orderly and at a sustainable pace,” said Ed Wolverton, president and CEO of Wilmington Downtown Inc. “We have been able to avoid a large number of units coming on the market at the same time leading to a glut of vacancies. We are seeing a similar pattern with downtown hotels.”

Throughout the city and the suburbs, occupancy rates have grown recently. A recent for Wilmington, according to real estate technology and analytics firm RealPage, was 96.7 percent, up from an average of about 95 percent for the past several years.

Nationwide in July, apartment occupancy rates rose to 96.2 percent, their highest level in 19 years, according to a RealPage report in August.

“Since the end of the recession in 2009, we have had nearly 10 years of economic growth. However, builders and developers have really only been very active over the last five years,” said D. Porter Jones of Charlotte- based DPJ Residential.

Jones’s firm is developing The Flats on Front, a joint venture partnership between DPJ Residential and Chaucer Creek Capital, at 111 Cowan St. in northern downtown Wilmington. The project consists of 278 units that will be delivered in phases. The first phase is currently under construction.

Jones said in general, pent-up demand resulted from years of not building new housing, single-family homes as well as apartments.

“Some of the new development you are now seeing is a combination of filling a void that was left from the recession and the years immediately after,” he said, “as well as absorbing the normal annual demand for new housing.”

In one of the most recent examples of developers trying to capture demand, Virginia firm Kettler recently submitted site plans to the city of Wilmington for 276 more apartments on a Harnett Street property along the Northeast Cape Fear River.

Different housing trends are also at play, according to real estate industry experts. Some of those include consumers who want flexibility and low maintenance, people getting married later in life, increasing student debt and stricter borrowing requirements.

Along those lines, two of Wilmington’s fastest-growing population segments – baby boomers and millennials – are counted among those who have the desire to be closer to downtown areas.

Before the recession, which started in 2007, many new apartments were built in the suburbs in the Southeast, developers say.

“Coming out of the recession, this trend literally flipped whereby in the major cities throughout the Southeast, the vast majority of the new apartment development over the last five to 10 years has been in the downtown areas,” Jones said. “Wilmington, however, has really been an outlier in this trend and has instead seen most of its new apartments being built out in the suburbs.

“We believe the new apartments that are under construction and proposed in downtown Wilmington are really long overdue.”

Lucien Ellison said he’s not concerned about the number of units coming or potentially on the way to downtown Wilmington. Ellison is the Wilmington partner of East West Partners, the developer along with the city of Wilmington of River Place, a mixed-use project on Water Street that will include 79 apartments.

“I think our project is a little bit different than the other two [Pier 33 and The Flats on Front] coming out of the ground right now” because of its location and the fact that River Place is a little farther along, Ellison said.

Everett Daniel, president of Pier 33 apartments development firm DeWitt Carolinas, said his company’s project, which will have more than 280 units, is expected to be completed by next summer.

“There’s room for us and maybe room for others downtown,” Daniel said, pointing to Wilmington’s high absorption rate of new apartments.

Daniel said having a good property management company helps. That firm for Pier 33 apartments will be Drucker + Falk, a multifamily management and commercial real estate firm that manages several apartment communities in Wilmington, including City Block, another downtown apartment complex.

Rent growth doesn’t appear to have had much of an impact on occupancy rates so far. Wilmington rents rose more than 8 percent in the first quarter, to an average of $1,050 per month, according to numbers released earlier this year by RealPage.

“Price increases of roughly 7 to 8% are occurring in Wilmington,” a RealPage news release stated.

And though last year’s Hurricane Florence wiped out 1,200 units, the Wilmington market was seeing 5-6% rent increases two to three years before the storm, a RealPage expert said in April.

Meanwhile, luring more tenants to the Port City isn’t just a plus for apartment developers.

“This will be especially critical for adding more retail and expanding the variety of stores in downtown,” Wolverton said. “It will help support restaurant and entertainment users. It can also be beneficial for office recruitment.”