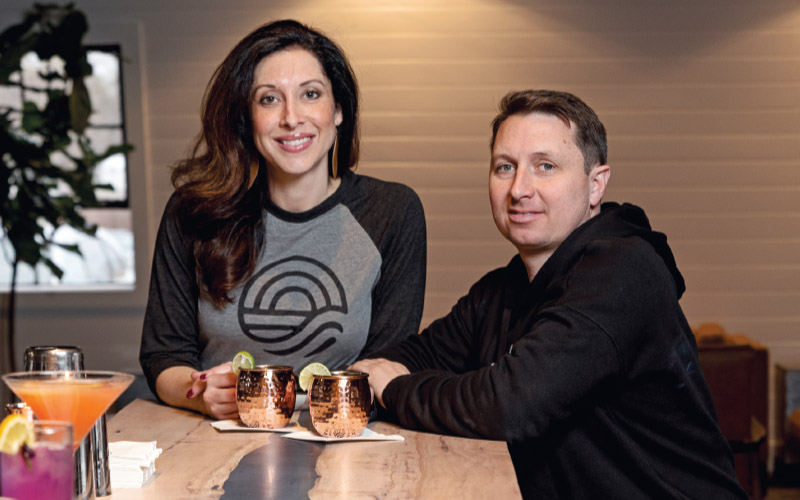 Beth Faulkner (left) and her husband, Shane, opened End of Days Distillery this month at 1815 Castle St. in Wilmington. (Photo by Michael Cline Spencer)
Distill: To extract the essence of something.

Or, as Shane Faulkner, founder of End of Days Distillery (EOD), puts it: “To produce a high-quality, ultra-premium product here in Wilmington.”

By product he means spirits – rum, vodka, gin and whiskey – that will be crafted in his Castle Street distillery that opened Feb. 1, making it one of only two distilleries in the area.

The 4,800-square-foot distillery with full cocktail bar, lounge, tasting room and event space is housed in a WWII-era Quonset hut (think Gomer Pyle, USMC) that sits snuggly and efficiently amid a few bungalow homes, an auto shop and – would you believe it – a church.

“We’ve been able to restore the building and make it a functional, as well as an artful, space,” says Oliver Earney, EOD’s special events coordinator and lounge manager.

Remarkable is the only word to describe what lay ahead once through EOD’s front doors. Three huge, shiny stills of different sizes – 7-gallon, 70-gallon and 500-gallon – loom auspiciously behind a glass partition. Their copper bellies protrude, then quickly taper upwards. Long, thin arms of pipe proliferate. The setup is reminiscent of a NASA space capsule.

In simplest terms, making liquor involves heating a fermented mixture of materials such as water, grains and aromatics, with the resulting steam condensed into spirits.

But it’s not a perfect science.

Proof of this stands a short distance away in the form of an on-site production lab, where experimentation of potencies and flavors is ongoing, and bottles are labeled. Inside this cozy, partially glassed shipping container with a room temperature of 80 degrees are bottles, beakers and graduated cylinders.

In a corner, two blue fermentation barrels bubble; the brown, soupy mixture under each lid smacks of goodness, makes you want to dive right in. Nearby, a gin trial percolates. It’s high school chemistry all over again, but so much cooler.

“You have to measure every ingredient,” says Earney, who admits he has a “passion for mixology.”

Measuring those ingredients is EOD head distiller Steve Tomori’s job. The mechanical engineer and New Jersey native says he made his first still out of fire extinguishers, producing rum and brandy, while living in Costa Rica.

“I did a lot of research on different still styles and configurations,” says Tomori.

On the production lab’s dry erase board, he illustrates the distillation process. Notes, figures and equations occupy every inch; he and the lab fizz with enthusiasm.

“Steve thinks in numbers,” says Faulkner, a former homebrewer who says conversations about opening a distillery started years ago.

“It began with close friends getting together over soup and talking about beer,” said the Eastern North Carolina native.

It wasn’t until November 2018, however, that things really started brewing. By April 2019 formal construction of the distillery had begun, and six key staff, including those mentioned here, had been assembled.

“Ninety-five percent of the work has been done by the team,” says Faulkner.

“A mountain of work has been accomplished,” says Tomori, pointing up at one of the stills.

Inspiration for the look and feel of the building – and eventually the brand– came mainly from the great outdoors, says Faulkner.

“Many of us grew up surfing and snowboarding,” he says. “I have a great appreciation for nature. Being outdoors, combined with good food, fine spirits and close friends, is what it’s all about for me.”

And it’s in that same spirit that the distillery got its name.

In fact, it shows on their bottles, with graphic labels featuring portions of Wilmington’s downtown waterfront that, once put end to end, render the entire waterfront.

Another quality that Faulkner says hitched EOD to the Port City is the city’s Cargo District, whose epicenter is just blocks away from the distillery. “In fact, we used a shipping container as part of the construction,” Faulkner says.

He says he sees the establishment of EOD as having a kind of “hightide- lifts-all-boats” effect on both the city and the region’s overall beer, liquor and beverage industry.

That said, Faulkner thinks using, for example, the “solera system” to age whiskey will be one thing separating him from the competition. A method of aging spirits that employs multiple barrels to ensure flavor and consistency over time, solera dates to 19th-century Spain.

EOD’s solera-aged single malt whiskey will be limited and available only at the distillery, Faulkner says.

While there’s still lots to do – from conducting daily distillery tours and tastings to stocking more EOD product at select ABC stores around the region – Faulkner always seems to turn the conversation back to friends, family, hard work and good times.

After all, what’s more important at the end of the day?