WORKING THROUGH IT: Cape Fear Games Copes With Pandemic Puzzle 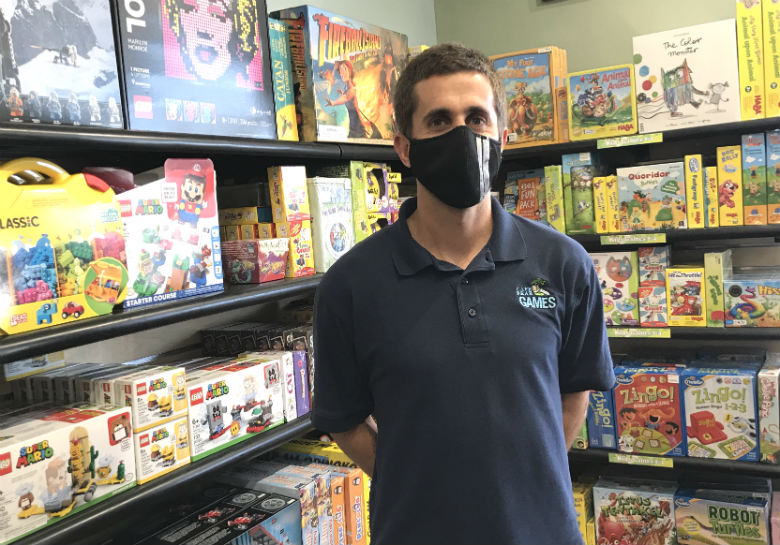 Heath Newton, owner of Cape Fear Games, said there's been some surprises for his business during the pandemic. (Photo by Cece Nunn)
Because of COVID-19, the game has changed at Cape Fear Games, a store that opened in 2009 in Wilmington.

The changes include the layout of the game store at 4107 Oleander Drive in Anderson Square.

"In the back of the store was where the seating was for customers to play games. It had seating for about 120 people  . . . we set up some retail there just for now, which we thought was going to be around only a little while, but it's been much longer than we'd imagined," said Heath Newton, owner of Cape Fear Games.

The pandemic has come with both predictable and surprising trends for the business.

"Disc golf has just gone absolutely insane. Sales are triple or quadruple what they were last year. The problem is we just can't get them in stock fast enough," Newton said. "The factories making discs are super backed up right now and we're constantly sold out of the more popular ones because that's been really, really popular. It's a good activity to do right now because you're outside and there's no contact."

Puzzles on the other hand "were kind of expected. Puzzles we sold out of just immediately. And then it's definitely kind of leveled off with puzzles right now," Newton said. "The board games are still doing real well."

Magic: The Gathering card sales (Newton is the owner of MTGO Traders, one of the largest sellers of digital Magic cards in the world) are up, role-playing games (RPG) are popular, and collectible prices have been rising, he said. But he's had to close Sideboard Board Game Cafe, the gaming restaurant next door to Cape Fear Games that Newton opened last year.

"Sideboard is the one thing that has been terrible," Newton said. "Everything else, you know, we kind of managed. Our sales here [at Cape Fear Games] are about on par with last year. So even though we don't have events and that sort of thing, we've kind of made up for that with disc golf and puzzles and board games and the card sales online. Sideboard,  however -- we tried really hard. It was just that even when we were full, we still lost money for the night, and there were lots of nights where we weren't full."

Newton said he hopes to be able to reopen Sideboard eventually, and for now, people can rent part of the space for a nominal fee to play group games such as Dungeons & Dragons or one of the hundreds available on shelves in the cafe space.