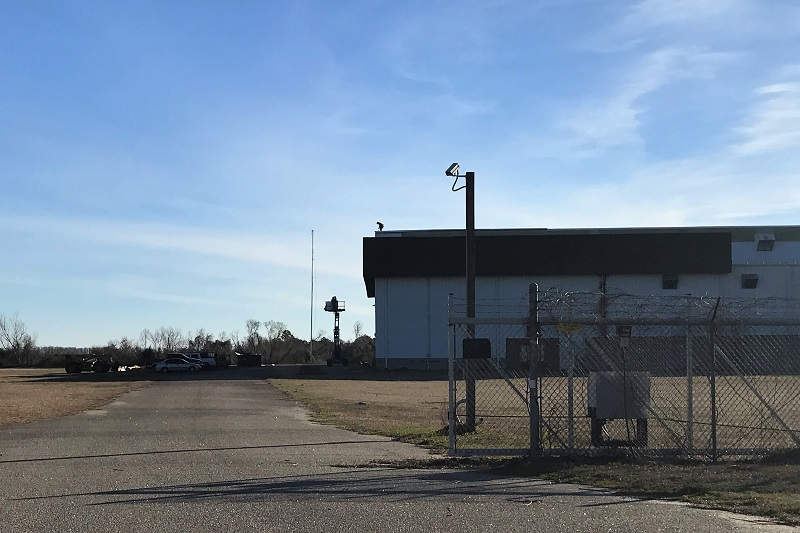 The site on Quality Drive Tuesday showed some activity. The Navassa property is being eyed by an unnamed manufacturer. (Photo by Christina Haley O'Neal0
Outside the former U.S. Marine Building in Navassa on Tuesday morning, there were several cars, some equipment and workers on the roof.

The 60-acre site is in the sights of a New Jersey-based company interested in relocating its manufacturing business there and creating 238 jobs in Brunswick County. That's according to a resolution up for consideration Tuesday night by the Brunswick County Board of Commissioners.

The county resolution is seeking the board's support in submitting an application to the N.C. Department of Commerce for a Rural Development Building Reuse Grant to aid in renovations of an existing building at the site. The company was not named in the resolution or the what type of manufacturing the company would bring.

The property has two buildings, with access to the Cape Fear River and CSX rail, and is listed for $8.5 million. According to the listing, the site is under contract.

Randy Stump, owner and president of Stump Corp., a firm that sells industrial buildings throughout the Southeast primarily in North Carolina and South Carolina, said Tuesday the firm is representing the seller, Brunswick Corp., a Chicago-based firm that owns multiple boat manufacturing companies.

He did not disclose when the property went under contract.

Brunswick County Board of Commissioners Chairman Frank Williams would not comment on the resolution Tuesday, but said, “We are excited about any opportunities to bring quality industries and jobs to Brunswick County.”

The grant would help the company offset the costs of making improvements to an existing building. Agenda documents state that certain alterations are required, including the addition of dock level doors, construction of a manufacturing room, compound room, site work and parking improvements.

Bill Early, executive director of Brunswick Business & Industry Development (Brunswick BID), would not comment on the project, but explained the grant process.

The grant in the resolution for commissioners’ consideration is made to local governments for approved economic development projects that meet certain requirements, Early said in an email Tuesday.

Funds are approved for qualified renovations and improvements to existing industrial buildings that have been vacant for at least 3 months, he stated.

“The company has approved improvements made and submits invoices along with proof that the invoice has been paid and requests reimbursement up to 50 percent. This request is submitted to the State and the State issues payment to the local government and the local government in turn provides the reimbursement to the company,” he added about the process.

The site used to be home to Rampage Sport Fishing Yachts, Brunswick BID officials said in an August email. Officials said at the time that the property had recently re-entered the market with fewer buyer restrictions, including a restriction that prohibited the sale to competing boat manufacturers.

In 2007, Brunswick Corp. made an announcement that the firm would acquire Rampage Yachts and its Navassa presence, according to a news release at the time. The company had planned to invest $51.2 million at the site, shifting production from an existing facility in Maryland that was planned to close.

The company had planned to bring about 800 jobs to the area with an annual average salary of $31,293. It was also set to get financial incentives that would include a state's Job Development Investment Grant, according to the 2007 release.

Previous news reports about the project reported the plant was shuttered in late 2008.

Officials with Brunswick BID said in the August email that the property has been vacant since that time.

Early said that should the proposed company move forward, it will purchase the facility and land, and it will be privately owned.