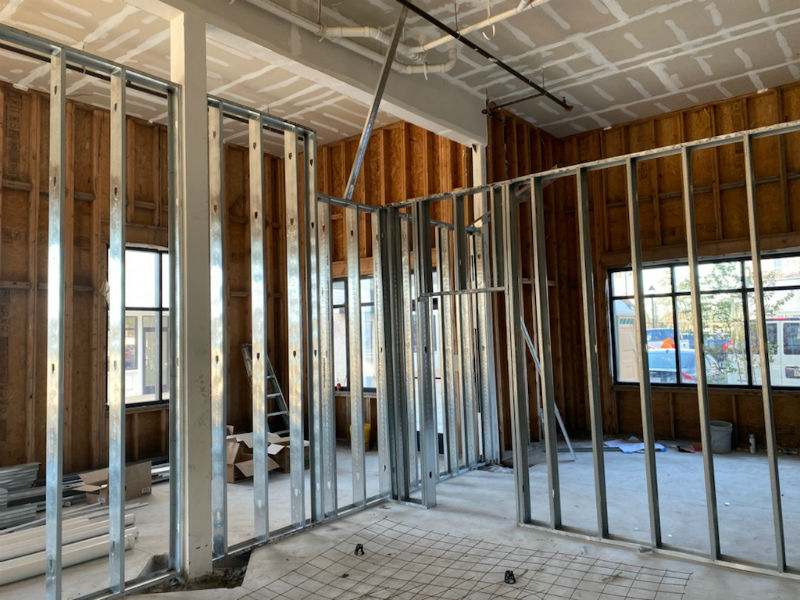 Commercial space in Harrington Square at Harrington Village in Leland is being converted to add more apartments to the project. (Photo courtesy of Pat McKee)
The mix is changing for a mixed-use project on Village Road in Leland.

But the space is being constructed to be flexible so it could be converted back to commercial uses if necessary, said Pat McKee, one of the partners in the Harrington Village project and owner of McKee Homes.

Demand drove the decision, he said.

“Before COVID, we’ve been trying to lease the space there for close to two or three years, and we just have not seen the interest or the demand in that location and it was becoming a big paperweight for us, an anchor on the project having all that space unleased,” McKee said. “Whereas we’re close to 100% leased out in the residential space. ... We feel that's a better use of the space.”

The three buildings in Harrington Square are four stories with the commercial space on the first floor and apartments in the top three. The demand for first-floor, one- to two-bedroom apartments that are handicapped accessible is tremendous, McKee said.

Despite the struggles at Harrington Square, commercial development in Leland is on the rise, primarily on U.S. 17.

“The majority of our residential growth [and by extension commercial growth] is occurring on Highway 17 as that area is much more convenient to the majority of the town’s residents,” said Gary Vidmar, the town of Leland's community and economic development director. “We’re trying to change that dynamic and attract commercial businesses to Village Road, and Harrington has begun to do that, but we've not seen any other progress happening on the same scale as we’ve seen on Highway 17.”

For now, work is underway on the conversion at Harrington Square in Harrington Village. The changes did not require a rezoning but did require building permits.

McKee said, “We expect to have leasable residential space there by the spring and be fully occupied by late spring, early summer.”