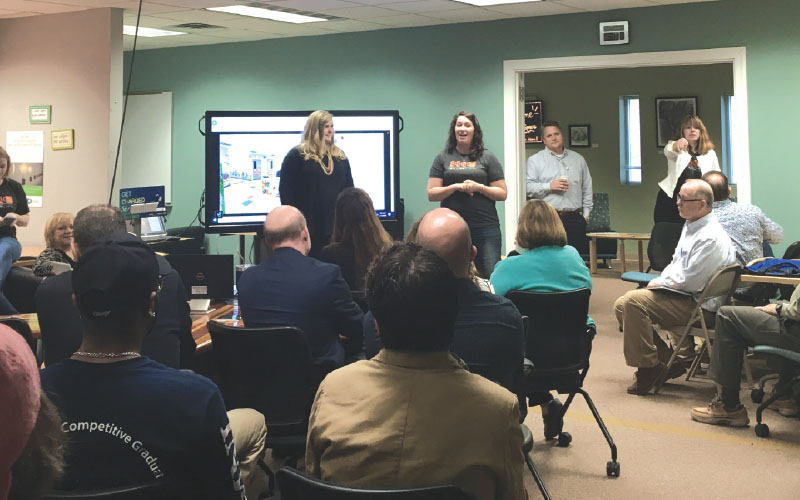 1 Million Cups is a free, national program, established by the Kauffman Foundation that meets every Wednesday.

It’s based on the notion that entrepreneurs discover solutions and engage with their communities over a million cups of coffee, according to the 1 Million Cups website.

Members of The Coalition, an organization made up of 11 local partners with the goal of growing entrepreneurs and small businesses in the region, sought to start the local chapter for more than a year, said Jamie Stalfort, business launch specialist with the Small Business and Technology Development Center at the University of North Carolina Wilmington.

“About a year ago, we [The Coalition] had a meeting, and we had talked about visiting 1 Million Cups in Raleigh and in Pembroke because we really wanted to bring a meetup to Wilmington of the same sort of caliber,” Stalfort said. “We really wanted something that would be very community-led, very community- owned, and 1 Million Cups fit the mold of what we thought we were looking for.”

After Stalfort and Laura Brogdon- Primavera, manager at UNCW’s Center for Innovation and Entrepreneurship, visited Pembroke’s 1 Million Cups meeting, they contacted the 1 Million Cups team to bring the organization to Wilmington.

“At first we kind of thought ‘Oh this is only for tech startups and it’s a pitch thing,’ but they [1 Million Cups] really wanted to emphasize that it’s not supposed to be for one type of business,” Stalfort said.

“They want everybody from a smalltown plumber to a tech startup with 30 employees to present because they really are trying to close the gap between what we traditionally see as an entrepreneur and what an entrepreneur really is.”

About 80 people attended the launch for a room set up with 35 chairs.

Both presented their business ideas and sought feedback from the audience on items such as how to identify their customers and how to spread the message of the value of their services.

Two entrepreneurs are lined up to speak for six minutes each after which they receive feedback from the audience and from representatives from The Coalition. Then, there is a chance to network.

Stalfort said the main goal of the organization is to support local entrepreneurs and let them know that the community is willing to step up and connect them to the right people and resources if they need help.

“We do have a ton of resources and meetups and things in town. But we want this to be something that’s kind of selfless,” Stalfort said. “You come to meet people, and you come to help other people. We don’t want it to be self-serving. We don’t want people to come and say, ‘Hey, here’s my business. I'm pitching about it, give me money.’ We want it to be ‘Hey, I’m having a lot of trouble with figuring out who my ideal target market is. Here are my skills. What do you guys think would be best?’ So that’s really what we're going for.”

So far, the response from the community on the new local 1 Million Cups has been positive.

Wilmington is a growing hub for the technology industry, which is why The Coalition wanted to bring 1 Million Cups to the region.

“When you look at the state as a whole, we’re often not thought of as an entrepreneurial hub. Because we’re at the beach, people consider us to be somewhere that our economy is driven by tourism and that’s not necessarily the case,” Stalfort said. “So, I think that Wilmington is a great location for 1 Million Cups because we are very entrepreneurial. We’ve got lots of companies here that came from a grassroots sort of start and have built themselves up over time.”

Besides connecting entrepreneurs to resources, organizers of 1 Million Cups in Wilmington hope it fosters a strong community of entrepreneurship.

“I think that having a 1 Million cups chapter here will help the rest of the state see that we’re a contender and that we’re not just a laid-back beach town,” Stalfort said.