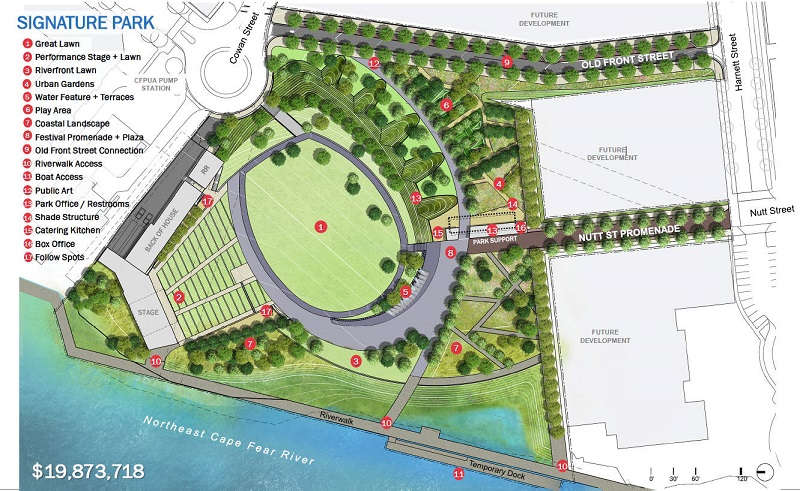 The city of Wilmington launched the details for its corporate sponsorship and donor campaign program Monday, which is geared to raise the additional funds needed to build the park as designed.

In early November, the Wilmington City Council directed city staff to move forward with plans for a $19.8 million park that includes an events stage, greenspace, lawns and playground, said Amy Beatty, community services director for the city of Wilmington.

The plan for the 6.6-acre site along the Cape Fear River, which is located at 11 Harnett St, was presented for a public meeting in April. The project is being funded by $20 million from park bond money voters approved in 2016

The Signature Park model, which includes within its design a water feature and terraces, as well as boat access, totals an estimated $19.8 million for construction.

During a Nov. 5 special meeting of city council, there was a consensus that council wanted to build the Signature Park model, one of three different park proposals presented at the special meeting with various cost estimates for designs, Beatty said.

The two other models, concepts listed as an "Essential Park" and "Aspirational Park". The Essential Park design, which eliminated some features and had value construction, put the project at $15.3 million. The Aspirational Park concept, with a price tag of about $25 million, had a design element that brought the Cape Fear River into the park, she said.

“Council’s guidance was that they wanted to go with what we’re calling the Signature Park, which is the one in the middle that contains everything in the master plan," Beatty said, referring to an overall plan for the property adopted last year. "They felt like the design element that brought the river into the park resulted in losing what they felt was usable space within the park, and also it was a very expensive design feature, very expensive construction process.”

The $19.8 million Signature Park model, which includes a water feature and terraces as well as boat access.

That puts the city over what is currently in the project budget.

There is $15 million remaining in the city's project budget, Beatty said, which is funded by the parks bond, she said.

"In order to build the park as designed and as identified in the master plan, we need an additional $4 million in investment in the park," Beatty said. "So we have just rolled out a corporate sponsorship naming program and the goal is to raise [the $4 million in] private investments in order to build the park that contains everything in the master plan.”

The campaign seeks to draw various levels of sponsorship, including a $3 million title sponsorship to name the park.

“We believe there is a real opportunity here for businesses to get some recognition and sponsorship. So it's really a win-win benefit to the businesses and it helps us build the park that we think is deserving of Wilmington," Beatty said.

A naming rights proposal for the concert venue, which is expected to be the largest in the region and managed by Live Nation, is slated to begin in January.

"So that will be a separated but coordinated effort with the naming rights program with the overall park," Beatty said. “And they [Live Nation] plan to begin the stage naming rights in January.”

Beatty said the city's management agreement with Live Nation provides that the company "will select the naming rights for the stage and split the revenue 50-50 with the city."

Rising construction costs have impacted the project's budget, Beatty said. "That's why we are further over budget than we had anticipated and that's before the hurricane," she added.

Hurricane Florence, which hit in mid-September, pushed the design firm's project presentation to the city council back about a month-and-a-half, Beatty said. City officials anticipate the project will be put out for construction bid in early 2019 with construction beginning in the spring. The park is slated to open in 2020.

If the city does not get the funding needed through the corporate sponsorship campaign, then another decision would have to be made with the overall construction of the project, Beatty said.

Wilmington City Councilman Paul Lawler said Monday that the city is looking forward to a report on the campaign soon. City staff is slated to update council about the interest in the campaign in early January, he said.
​
“We’ve seen so many other communities where individuals and businesses have stepped up and sponsored things that allowed to the community to have a great feature," he said. "And we hope we can do that here."